‘A leader in the province’: Fredericton coach awarded for para sports contributions 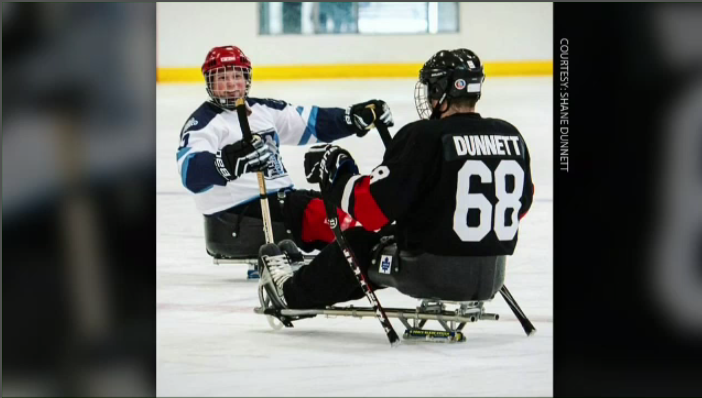 HALIFAX -- A Fredericton coach has been formally recognized for two decades of contributions to para sports.

Ability New Brunswick has awarded Shane Dunnett this year’s Para Sport & Recreation Award, for being a leader in the province.

Dunnett has been an advocate, coach and volunteer for adaptive sports for the past 20 years. He coaches sledge hockey, volunteers on and off the ice, and encourages people to join adaptive sports.

“Sport, for me, was an outlet -- knowing that I’m confined to a wheelchair,” he said. “Cross-country skiing, playing basketball, para-ice hockey, whatever it is, it kind of lets me forget about everything and focus on myself and my well-being – and I love the exercise.”

For Dunnett, he says it’s important for people living with injuries to become part of a team.

“Even if it’s nothing to do with sports, I’d still go to Stan Cassidy (a Fredericton rehabilitation centre) and talk to newly injured patients,” he said. “Just go in and sit and talk with them and tell them that things will get better. That there is life in a wheelchair.”

“We started bringing him to schools where we have after-school programs and extracurricular activities, and afterwards we started doing these YouTube videos together,” said Matt Stever, who manages Para New Brunswick through Ability New Brunswick. “We started doing outings, and he’s been very active, and just a leader in the province.”

Dunnett says the feeling he gets from mentoring players is priceless.

“Now we have some of these kids coming out now part of a team, and that’s just a huge impact on their lives,” he said. “They’ve come up and they’ve given me hugs, and thanked me for that, and it brings tears to my eyes. To have an impact on somebody like that in a positive way is an indescribable feeling.”

Dunnett has his own YouTube channel, called Para Life. Through it, he shares his love for sport and activity, with a wider audience.