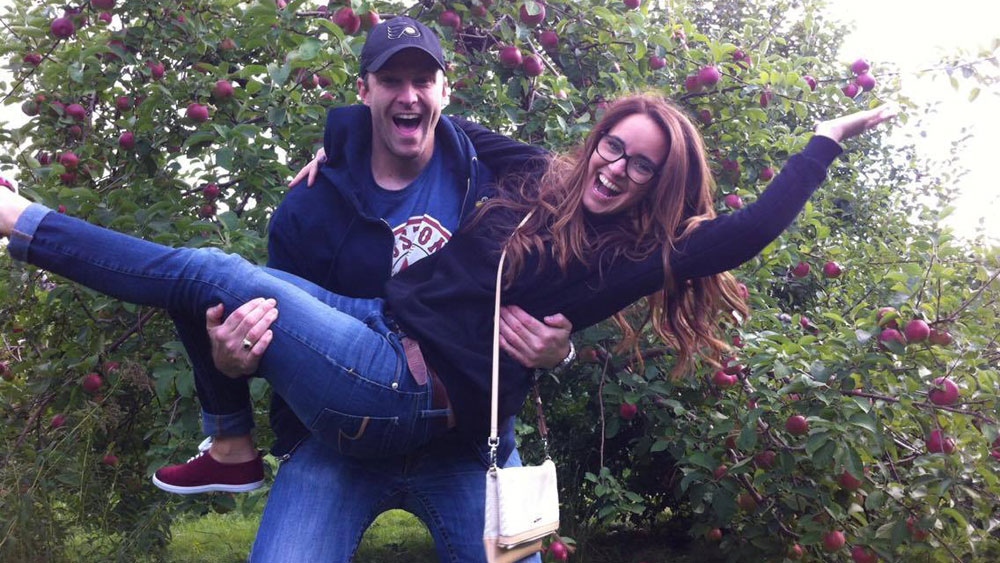 New Brunswick Premier Brian Gallant announced on Twitter that he and his girlfriend, Karine Lavoie, are engaged to be married. (Brian Gallant/Twitter)

FREDERICTON -- They met on a blind date, and he popped the question at one of the iconic landmarks of the Acadian people.

He posted the news Monday in both official languages on his Twitter feed: "Karine said yes to spending the rest of her life with me."

Gallant said both he and their dog Blaze couldn't be happier.

He also posted a photo of himself casually dressed in a ball cap, Boston Red Sox T-shirt and jeans, holding Lavoie in his arms under an apple tree. They are smiling widely.

Although they both grew up in Shediac Bridge, N.B., the two met on a blind date set up by mutual friends.

He proposed to her March 3 at the Memramcook Institute, a grand former seminary and Acadian university in Memramcook, N.B., not far from their mutual hometown.

"She's absolutely terrific and together, they compliment one another very well ... The two of them together, frankly, it feels like a very happy partnership," said Liberal MP Dominic LeBlanc, a longtime friend of Gallant's who is also a friend of Lavoie's family.

Gallant sent him a message him over the weekend to tell him the good news, he said.

LeBlanc said he and his wife had met the couple for dinner a few years ago at Le Petit Paris restaurant in Shediac. He said it was clear that Gallant and Lavoie had a "deep connection."

"He was clearly captivated by Karine from the very start and I left that first dinner with the two of them very much of the view that this was probably the person that Brian would marry," said LeBlanc in a phone interview from Moncton, N.B.

LeBlanc, who is the federal minister of fisheries, said he's known Gallant for about 15 years and is a friend of Lavoie's family -- her grandfather was a friend of LeBlanc's father, former governor-general and longtime MP Romeo LeBlanc.

He said Lavoie has worked with various New Brunswick community organizations since graduating from the University of Moncton.

LeBlanc said he and Lavoie had a meeting about seven years ago when she was a student, in her capacity as an organizer with the university's chapter of Right to Play, an international organization that uses sports and games to improve health and build life skills for children affected by war, poverty and disease.

"She was a enthusiastic student with a few other students who were leading a fundraising effort for Haiti," said LeBlanc. "She's very special."

LeBlanc said Lavoie has been a positive influence on Gallant.

"She's encouraged him to do things outside of work and politics," said LeBlanc.

"I would tease him that if he didn't find a way to ... have interests outside of work, he was going to get overtired. A lot of Brian's friends thought we needed to find a way for him to not work 18 hours a day, and Karine has been successful is setting up a routine for him that doesn't only revolve around work.

"As a result, I think he's much more enthusiastic and much happier about the work he has to do because he has this presence at home that is so positive for him."

Gallant, whose father is Acadian and his mother one of 17 children born to Dutch immigrants, was elected premier in October 2014.

He received a bachelor in business administration and a law degree from the University of Moncton before completing his masters of law from McGill University. Gallant worked in a private law practice before being elected Liberal leader in 2012.

-- By Aly Thomson in Halifax

Life update: Karine said yes to spending the rest of her life with me. Blaze and I couldn't be happier! pic.twitter.com/I248qUHb2a