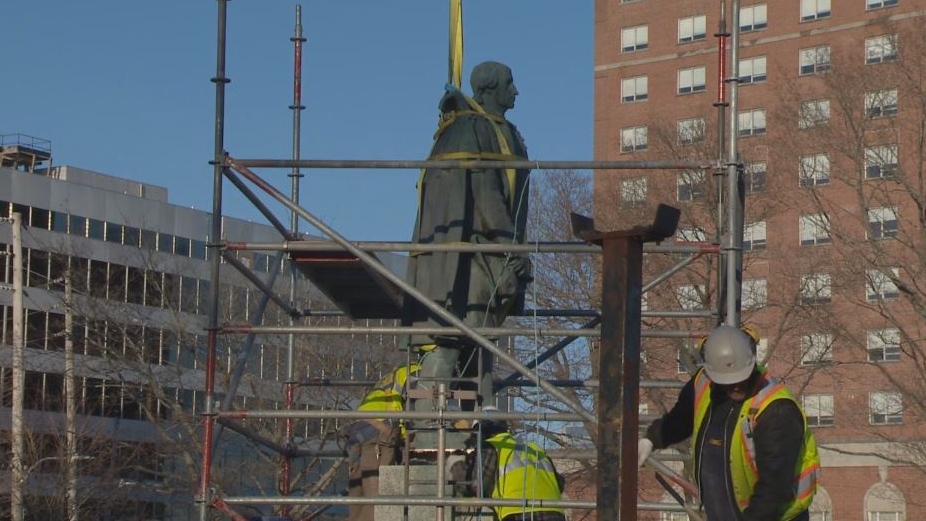 Scaffolding is set up around a statue of Edward Cornwallis in Halifax as workers prepare to move it on Jan. 31, 2018.

HALIFAX -- For almost a decade, the residents of Halifax have found themselves in the middle of an uncomfortable debate about the founder of their historic port city.

For the most part, it has been scholars and activists who have squared off over the legacy of Edward Cornwallis, the British military officer who stands accused of practising genocide against the local Indigenous population.

On Thursday, residents will be asked for the first time to offer their opinions at a highly anticipated official public meeting.

"A big part of our job is to hear what the public has to say," says Monica Macdonald, a history professor and co-chairwoman of a 10-member task force that will recommend within the next two years how the city should commemorate Cornwallis and the history of the region's Indigenous population.

The debate attracted national attention in January 2018 when city council decided to remove a statue of Cornwallis from a downtown park that also bears his name. The move followed a series of protests that raised safety concerns among city officials.

"The issues around the statue have been going on for some time, especially for the Mi'kmaq community," says Macdonald, who leads the research team at the Canadian Museum of Immigration in Halifax.

"Our task force was created by Halifax regional council in the context of their statement of reconciliation, following the (federal) Truth and Reconciliation Commission report in 2015. That's the spirit in which our task force has been created."

"Through the process of colonization, Indigenous women have been 100 per cent displaced from their inherent roles and their rightful place on this land," Moore said in an interview.

"We now have this 1,200-page document that proves there is an ongoing genocide happening .... Our life-givers are being targeted and are disappearing .... Our grandmothers and our matriarchs are not being heard."

Moore said there was a direct connection between Cornwallis's infamous decision in 1749 to offer a bounty for the scalps of Indigenous people and the findings of the commission, which found systemic violence against First Nations, Metis and Inuit women constituted a form of "genocide" and a crisis "centuries in the making."

"If you don't make the connection and you can't see it, you're blind," Moore said.

She plans to make a presentation to the task force on Thursday night. The meeting at the Mi'kmaq Friendship Centre in Halifax will mark the first of four public sessions this month.

Members of the public are also being asked to contribute written submissions. Macdonald says 10 papers have already been submitted.

The task force plans a series of in-depth discussions with the public this fall, but the format for those sessions has yet to be worked out.

As for the fate of the statue and how the city should pay tribute to Cornwallis and its Indigenous population, Moore said she would support any ideas that were endorsed by Mi'kmaq women and grandmothers.

"It would only be right to listen and honour the wishes of the Indigenous women and grandmothers on this land," she said. "Whatever the outcome is, I want it to have Mi'kmaq women's stamp of approval on it."

Aside from the statue and the park, Cornwallis's name also appears on a street in downtown Halifax.