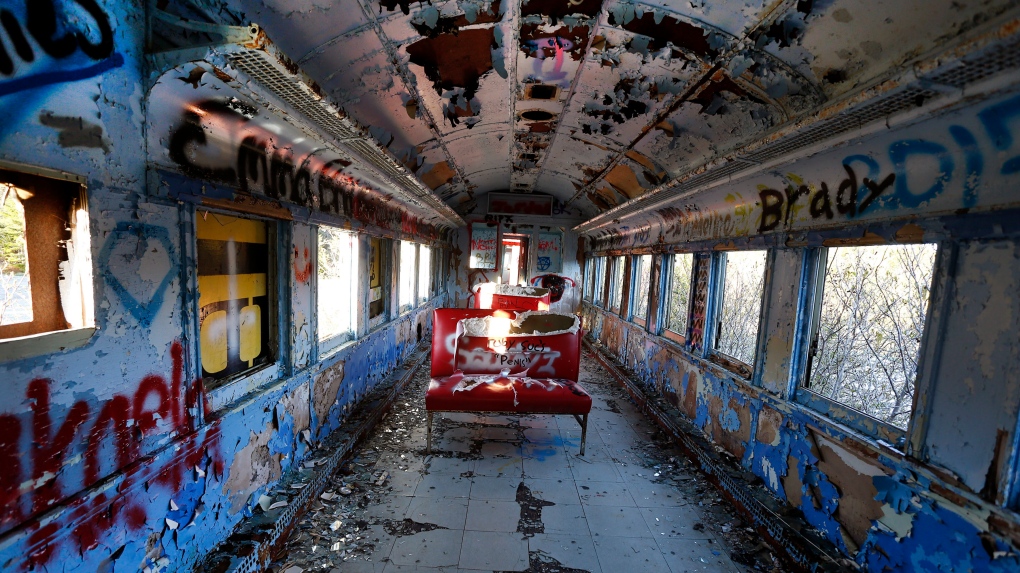 A view inside one of the train carriages at the abandoned Trinity Train Loop Amusement Park in Trinity, N.L., is shown on Tuesday, June 11, 2019. (THE CANADIAN PRESS/Paul Daly)

TRINITY, N.L. -- Once a bustling family attraction and the site of a rare piece of North American railway history, visiting the Trinity Train Loop in eastern Newfoundland now feels like walking into a post-apocalyptic movie scene.

Train cars with smashed windows are covered in graffiti. The mangled tracks guide visitors through a wooded area near Trinity, on the island's Bonavista Peninsula, straight into the eerie space of a crumbling amusement park, complete with a collapsed, rusting ferris wheel and an empty swimming pool.

Beer bottles, plastic and cigarette butts litter the remnants of a mini golf course, all set beside a stunning, otherwise peaceful woodland stream.

The loop operated from 1911 until 1984, when the Bonavista railway branch shut down, according to the Newfoundland and Labrador Heritage website. Businessman Francis Kelly later bought the site and built the amusement park. After shutting down in 2004, the site sustained more damage when Hurricane Igor swept through eastern Newfoundland in 2010, leaving behind the decrepit appearance it holds today.

But thanks to blogs and social media, the loop's rundown appearance has ironically given it a new life as an attraction for tourists, photographers and adventurers, some of whom visited the active amusement park as children.

Bob Bartlett of Trinity Eco-Tours said guests on his ATV tours of the area often ask to be taken to the Trinity loop, which remains a source of fascination for train enthusiasts and thrill seekers who are interested in the site's eerie feeling.

"It surprised me that this is an interest, a keen interest in visiting this amusement park," Bartlett said. "People told me you could make a whole trip out of that alone."

Despite its state of decay, the section of railway track itself is a registered heritage structure, according to the Heritage Foundation of Newfoundland and Labrador, "because of its historical and engineering values."

The area's steep hills made it challenging to design a track. The loop around the circular pond was designed for trains to descend gradually, a structure the heritage foundation called "a rare example of an exposed rail loop in Canada."

There are a few similar loops in British Columbia's mountains, but the Trinity Train Loop is unique because of its visibility.

The province's railways stopped running trains in 1988, and much of the track has been ripped up, making what remains of the Trinity Train Loop even more significant for railway history buffs.

Despite its historical significance, the future of the site -- whether it will be cleaned up, preserved or left to continue its decay -- is in limbo. The site is technically on Crown land and falls under the province's jurisdiction.

Jim Miller, mayor of Trinity, said the town has addressed the issue of the debris with the province, but so far only signs have been erected on the property warning of risks on the site.

A statement from the provincial Department of Fisheries and Land Resources, which is responsible for managing Crown lands, indicated the possibility of restoration is on the province's radar, following an assessment of environmental concerns, though no timeline could be provided.

"No efforts to restore the site can occur without first excluding the need for environmental remediation, and efforts are underway to arrange an inspection of the site," the statement read. "Officials are following up with the Heritage Foundation of Newfoundland and Labrador to ensure its public content is accurate and up-to-date."

John Paul Coady, a lifelong train enthusiast from St. John's, remembers taking his first train ride at the loop as a young kid in the late 1980s, and he's visited it every year since then.

Coady said visiting the now-derelict site year after year is heartbreaking for him, considering its historical significance, past efforts to preserve it and his own happy memories there.

"Seeing the place like it is now is just absolutely devastating," Coady said. "You just assume it's always going to be there."

Coady started a Facebook group about the Trinity Train Loop, initially to spread the word of his preservation goals, but he said it's transformed into a space where people in their 30s and 40s share old photos and memories.

And he said growing interest in the loop as a photography destination has created an opportunity to raise awareness of its backstory, and he hopes to eventually see it preserved to memorialize the province's vanishing railway history.

"It's a pretty spooky-looking place -- it's been abandoned for so long, it's overgrown and stuff like that -- so it has kind of like a romance as an abandoned place," Coady said. "That's been attracting a lot of people, which is good because that gives me a chance to say 'well look, this is why it's here."'