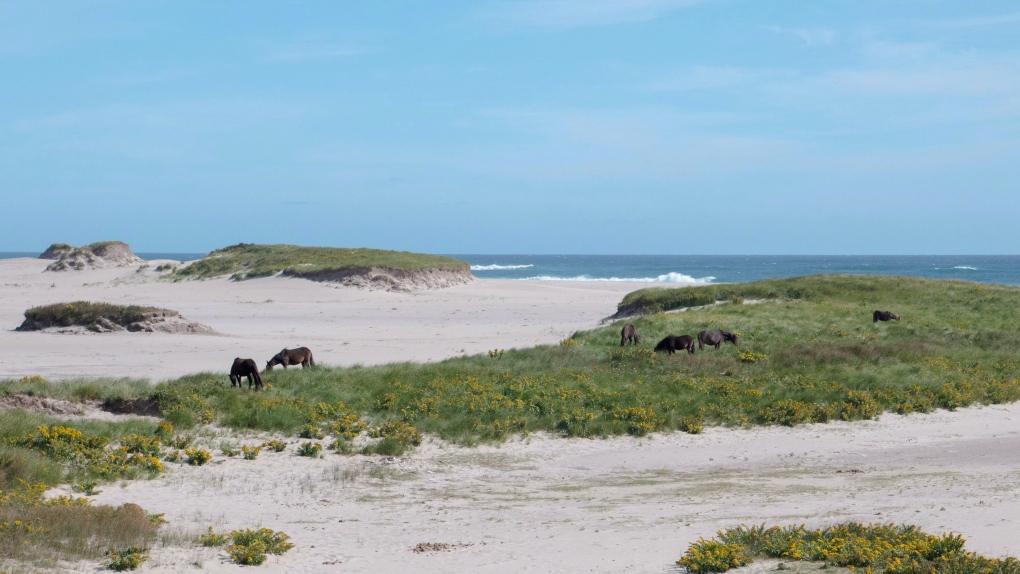 HALIFAX -- Another chapter in Sable Island's long history of providing rescue services for struggling seafarers may be about to begin.

The Royal Canadian Air Force says it is assessing whether to set up a fuel cache for its Cormorant search and rescue helicopters near existing landing pads on the island, located about 290 kilometres southeast of Halifax.

Maj. Trevor Reid said in an email this week that the military will work in the "coming months" with Parks Canada to consider the proposal.

Reid said the CH-149 helicopters had used natural gas production platforms off Sable Island for landing and refuelling during missions, but those landing areas have been closed since last year.

The Sable Island National Park Reserve is famous as a wild and windswept island where horses roam freely and large colonies of grey seals live on its beaches.

The park's website says the area is on the migratory route of over 350 bird species, with 16 species confirmed to breed on the island during the spring and summer. It notes the roseate tern has been identified as endangered under the Species at Risk Act and "must be protected from disturbance during the breeding season."

The island also has a history of hosting rescue services, with the first life-saving station established there in 1801 to assist shipwrecked boats, though by 1959 the stations were closed as navigation technologies improved.

According to the Parks Canada website, in the heyday of rescue operations, towers and regular horse patrols along the beaches helped life-saving station staff spot ships in distress, and they would row for hours to bring shipwrecked seafarers to safety.

Danielle Hickey, a spokeswoman for Parks Canada, said there are currently two concrete helicopter landing pads on the island, built in 1968 and 1984, but one is unavailable for use from May to August to protect the tern colony nesting sites in the immediate area.

She says in recent years helicopters that accessed the island included Canadian Coast Guard Bell-412 and Bell-429 for transporting federal Fisheries Department researchers, and on some occasions Cormorants for search and rescue training, along with Vision Air's Sikorsky S76 for Parks Canada operations and visitors.

"This initiative is currently in the idea and concept stage; therefore, potential size of a fuel cache cannot be determined until a site visit and subsequent analysis of information gathered are completed," she wrote in an email on Friday.

Currently, Parks Canada keeps about 24 drums of fuel to be used in emergencies and occasionally for refuelling coast guard or Vision Air helicopters, she said. There is an existing helicopter refuelling system on the island, which was installed in the early 2000s, but it is no longer operational, Hickey said.

She notes that before a landing, aircraft landing sites are inspected to ensure there is no wildlife in the area.

Reid said it's too early to indicate the number of flights that would occur, or the size of the fuel cache that the 22-metre-long Cormorant helicopters, which have five crew and up to 15 seated passengers, would require.

"The ability to refuel helicopters on Sable Island National Park Reserve would increase the life-saving capabilities by significantly extending the current range of RCAF search and rescue services in the surrounding Atlantic Ocean," he wrote.