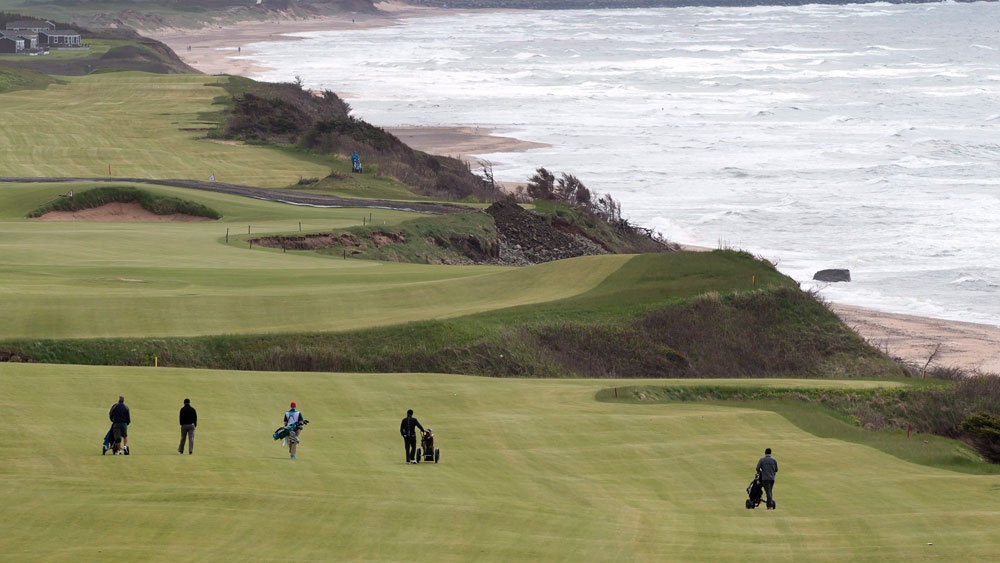 Golfers walk the fairway on the 528 yard, par 5, 18th hole at Cabot Cliffs. The seaside links golf course rated the 19th finest course in the world by Golf Digest, is seen in Inverness, N.S. on Wednesday, June 1, 2016. Located between the coal mining town of Inverness and the Gulf of St. Lawrence, the sister course to Cabot Links is receiving rave reviews and drawing international attention. (THE CANADIAN PRESS/Andrew Vaughan)

Golfers know a thing or two about confronting the impossible.

The 230-yard forced carry over water, a herculean task for most beginners. Getting into the Masters, whether as player or fan. Daunting major-championship venues like Carnoustie or Bethpage Black -- or better yet, fearsome Oakmont, host of the 2016 U.S. Open.

Then there's making a go of a pipe-dream five-star seaside links course, wedged between a hardscrabble former mining town and the pitiless Gulf of St. Lawrence, on a remote edge of eastern Canada that's three hours from the nearest major airport. And then building another one right next door.

"There's no doubt that Links was a little bit of a field of dreams," says Ben Cowan-Dewar, the entrepreneur-turned-golf impresario who first clapped eyes on the abandoned mine site in 2004 during a visit to Inverness, N.S., on the western edge of Cape Breton Island.

He was there with, and at the behest of, Rodney MacDonald, Nova Scotia's fiddle-playing minister of tourism and future premier -- a man keen to help resurrect a town long forsaken by the coal industry that spawned it. Many had come before Cowan-Dewar, but none were as smitten.

"We obviously believed, if we built it, they would come."

Eight years later, the Rod Whitman-designed Cabot Links opened to rave reviews and more than a little incredulity -- wasn't golf a luxury pastime on the wane? Who would go to such multi-modal travel trouble -- to say nothing of the expense -- just to play one particular golf course in the middle of nowhere?

Golfers, as it turns out. And it's no longer just one course.

By all indications, lightning has struck twice in Inverness, this time with the Cliffs -- a jaw-dropping oceanside layout designed by Bill Coore and Ben Crenshaw, the latter a two-time Masters champion, the former a U.S. golf course designer who's now one-half of the most celebrated architectural duo of the modern era.

Golf Digest magazine anointed the Cliffs last year's "Best New Course," and this year crowned it the 19th finest course in the world -- rarified air for a new facility, let alone a Canadian one.

"I think it's created buzz on a scale that we probably only could've hoped for," says Cowan-Dewar. "Certainly, that's converted to folks from all over the U.S. and Canada booking to come and see us, which is pretty exciting."

The figurative line of headlights that was soon snaking its way north from the airport in Sydney, N.S., not only proved him right, but also demonstrated one of golf's fundamental truths: its disciples are passionate, unpredictable and willing to chase their passion to the ends of the earth.

"Golf at its core, right?" beams Cowan-Dewar. "There's certainly an element of getting back to the roots of the game that has appealed to people."

One of a kind though Cabot may be, the business case on which it is based is not. It started in the 1990s, first with Nebraska's acclaimed Sand Hills Golf Club in 1995 and later in Oregon with Bandon Dunes Golf Resort, the 1999 brainchild of Cowan-Dewar's business partner Mike Keiser.

Bandon remains the gold standard, having blossomed into a full-blown resort community with five of the finest links-style layouts in the world. But others are following suit: since 2013, discriminating golfers have beaten a path to Florida's remote Streamsong Resort, built on the edge of a phosphate mining operation an hour's drive outside of Tampa. And Keiser is at it again with Sand Valley Golf Resort in Wisconsin, scheduled to open next year.

Dr. Michael Hurdzan, a prominent U.S. golf course designer who was in Ottawa recently to unveil his renovation work at the Ottawa Hunt and Golf Club, home to the 2017 Canadian Women's Open, was among a parade of prominent designers invited to explore the Inverness site before Cabot was built.

"I said, 'Once you reclaim it, this could be just incredible. The problem is getting here,"' Hurdzan recalls. "It's a beautiful, stunning piece of ground. It never occurred to me to do 36 holes there."

That it occurred to build any to Cowan-Dewar and Keiser seems to surprise those determined to write golf's obituary, citing statistics that suggest a lack of growth and waning interest amid high costs, an ever-contracting economy and the game's elitist reputation.

"Golf has existed for 500 years; that it has evolved over 500 years probably shouldn't surprise us," says Cowan-Dewar. He likens it to running a restaurant: eateries come and go, but the restaurant industry thrives despite half a century of changing tastes and markets.

"I think we've seen still great participation rates in Canada. Certainly, in the numbers of people that will come to Cabot this summer, and that have come over the last couple of years, I'd tell you that there are still lots of people playing golf."

He also cites Cabot's rates -- $185 at peak season for resort guests and $215 for golfers only, with an array of discounts available to Nova Scotia residents -- as a draw for a market segment that's accustomed to paying significantly more.

Inverness has, for the most part, been a beneficiary of Cabot's success. It employs 330 people and 250 caddies, many of whom are mining-industry refugees, and the town is so seized with business development, renovations and home construction that contractors are hard to come by.

"I think those things I wouldn't have imagined in my wildest dreams; I think that's probably as rewarding as all of the other stuff," Cowan-Dewar says.

"You know as well as I do, that's a result of an awful lot of people who have contributed so much to every facet to get it to be where it is today. Which is not just two critically acclaimed golf courses, but hopefully a great business, and a lot of fun still -- every day, eleven years later."