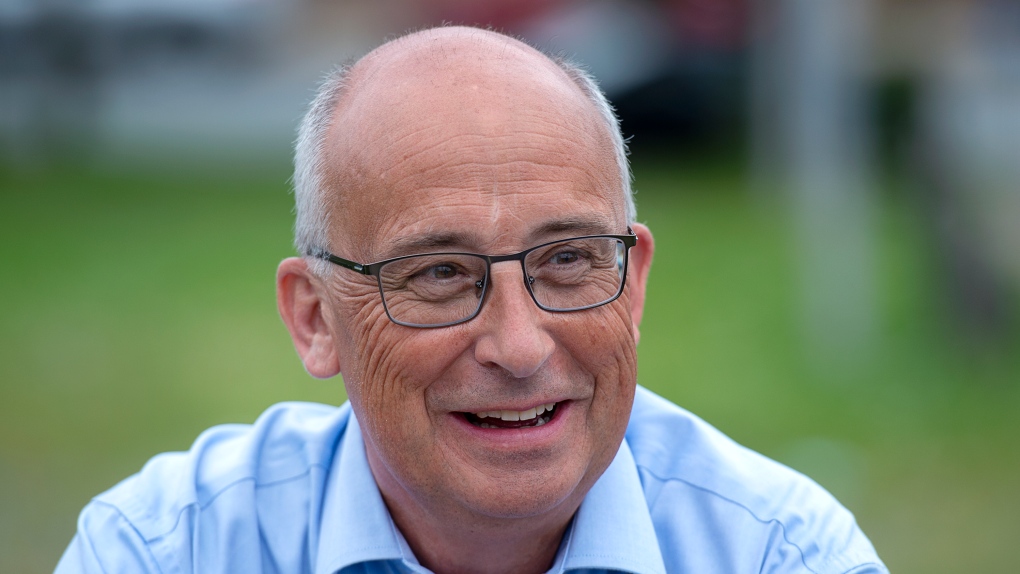 NDP Leader Gary Burrill, speaking on Day 20 of the provincial election campaign, pointed to the case of Anne MacPhee, a woman whose husband died after waiting 34 minutes for an ambulance -- even though they lived three kilometres from a hospital in Halifax. (THE CANADIAN PRESS/Andrew Vaughan)

HALIFAX -- Nova Scotia's overburdened ambulance service was offered up Thursday during a televised party leaders' roundtable as one of the key reasons why the province's health system isn't providing timely care to patients.

Earlier this year, a study of the province's privately operated ambulance service found that ambulances spend too much time off-loading patients at hospitals causing delays in response times. The report, written by consultants with Fitch and Associates, also found ambulances are often tied up transferring patients between facilities.

The consultants said Nova Scotia's current model also doesn't take advantage of the medical care paramedics can provide because all patients who accept assistance must be transported to hospital.

Liberal Leader Iain Rankin said his government had been working on the report's recommendations before the Aug. 17 election call.

"There are many recommendations that can help us make sure that we make our system more efficient so that when we are transferring patients from institution to institution they aren't tying up ambulances," said Rankin.

He said the government recently hired more paramedics and if re-elected would make investments to improve the ambulance system where needed and "follow the report."

But Progressive Conservative Leader Tim Houston said the ambulance service wouldn't be fixed until the "root causes" of the delays are tackled across the health system.

"When the emergency room gets full the ambulance that pulls up at the hospital can't off-load because the emergency room is full," Houston said. "That's why we're talking about more doctors ... these things are all tied together."

The Tory leader has kept almost a singular focus on the province's health system over the first 20 days of the month-long election campaign.

He pointed out that as of last Sunday, nearly 72,000 Nova Scotians are on the province's wait-list for a family doctor.

But Rankin said keys to creating more access to the system will be more virtual care options and the utilization of a broader range of health professionals in collaborative practices.

He again distanced himself from a Liberal campaign promise made in 2013 of a doctor for every Nova Scotian when asked by CTV anchor and moderator Steve Murphy whether he thought the promise was ever realistic.

"The model has changed," said Rankin. "We no longer have a so-called family doctor that takes on 5,000 patients. That's why we have to spend money on collaborative care and on other health infrastructure."

NDP Leader Gary Burrill said the challenge of providing primary health care was not beyond the province's "capacity to meet." However, he too stopped short of saying that everyone would have a family doctor and like Rankin touted the use of collaborative medical practices.

In fact, the concept was introduced in Nova Scotia in 2011 by the former NDP government led by Darrell Dexter. The goal was to address gaps in rural access to emergency care.

"There is a path ... and it involves seeing that every primary care provider works to the full scope of their practice," Burrill said. "We have done quite well in areas like advance care paramedics but we have done poorly in other areas, for example with physician assistants."

The wide-ranging 90-minute discussion also touched on areas such as the economy and deficits, long-term care, leadership, and COVID-19.

The leaders sidestepped questions on whether they would impose a vaccine passport system such as Quebec announced Thursday or mandate vaccines for all school staff, health care workers and provincial employees.

All three complimented the province's public health response during the pandemic and Dr. Robert Strang, the province's chief medical officer of health. They said they would continue to rely on the advice of health officials.

As of Thursday Nova Scotia had 15 active cases of novel coronavirus.

"I think if there were a Nova Scotian equivalent of a Nobel Prize we would want to award it to the public health authorities of our province," said Burrill. "So it's only prudent for any government to follow the lead and the example and the guidance that we have been seeing."

This report by The Canadian Press was first published Aug. 5, 2021.