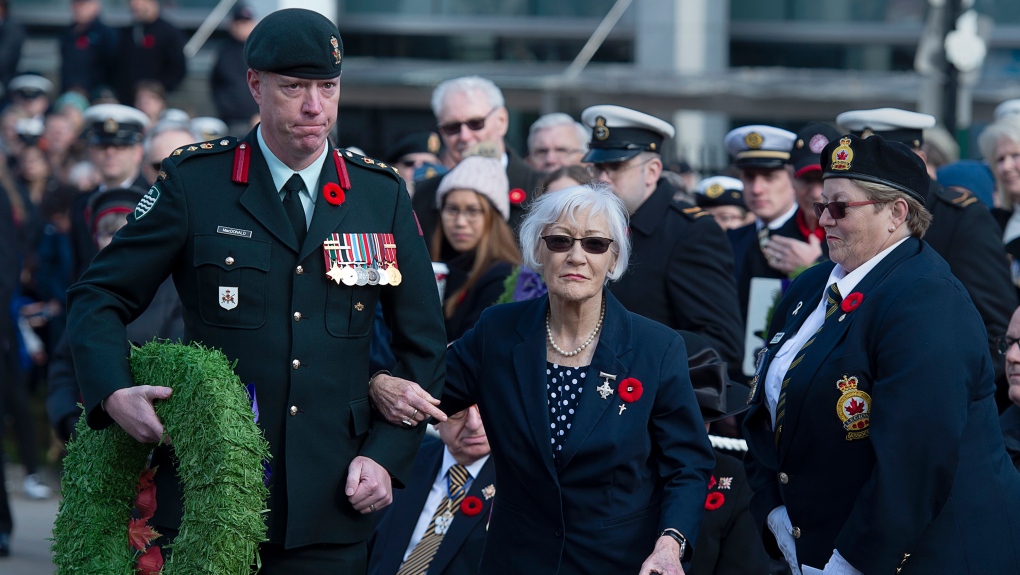 Silver Cross Mother Anne Snyder is escorted by Col. John MacDonald, commander of the 36 Canadian Brigade Group, as she lays a wreath at Remembrance Day ceremonies at the Grand Parade in Halifax on Monday, Nov. 11, 2019. (THE CANADIAN PRESS/Andrew Vaughan)

HALIFAX -- As thousands gathered Monday for a Remembrance Day ceremony at the Grand Parade in Halifax, their numbers included veterans of United Nations and NATO missions present as a reminder that support is available to those still suffering from war trauma.

Artillery occasionally boomed from nearby Citadel Hill as Silver Cross mother Anne Snyder, whose son Jonathan Snyder died in an accident during the Afghanistan war, laid a wreath in his memory.

As the wreaths were brought before the cenotaph, Angus (Gus) Cameron, an advocate for veterans, stood with other veterans who served in UN- and NATO-sanctioned operations ranging from the Korean War to the Iraq and Afghanistan conflicts.

The 57-year-old veteran said he marches in the ceremony each year to remember those who served and also to remind any veterans who may be suffering that his group is present to provide fellowship and support.

"We come to pay our respects at Grand Parade and to show the general public there's a helping group available to any veteran that may be struggling," he said before the ceremony began.

"If you know a veteran that's struggling, we can show them some friendship . . . brotherhood and sisterhood and get them back inside the family again."

The regional representative for Veterans of United Nations and NATO said young men and women in the Canadian Forces have "seen some pretty terrible things" in a variety of wars and may suffer from hidden damage that his group can help with.

"We're here for everybody to help them get through it and suggest different ways to heal," said Cameron, who served 26 years in the Royal Canadian Navy, mostly in peacetime operations.

Cameron estimated there are 780 UN and NATO veterans in Nova Scotia and more than 7,000 members across the country, in addition to chapters overseas.

The federal Liberal government has been increasing the proportion of case workers available to veterans in recent years and has added funding to help homeless veterans find a place to live and other necessary services. In July, 22 initiatives were announced to help former military members.

However, Veterans Affairs Canada has been criticized for failing to meet targets in responding to disabled veterans seeking supports and benefits.

For example, veterans are told they can expect to know within 16 weeks whether they qualify for disability benefits. But the average wait time is between 23 and 29 weeks, with many forced to wait much longer, according to figures reported last April.

About 6,700 military members who served in the Afghanistan war were receiving disability benefits for mental health conditions as of March 2018.

Cameron said his group helps new veterans navigate the paperwork, putting them in touch with other veterans who've already gone through the application process.

Members of the veterans' group often march in leather vests with a mix of crests indicating their military backgrounds, but on the group's website, they stress they are not a motorcycle club.

"It's just a hobby some of us have. We have lots of people who don't ride (motorcycles)," Cameron said.

This report by The Canadian Press was first published on Nov. 11, 2019.