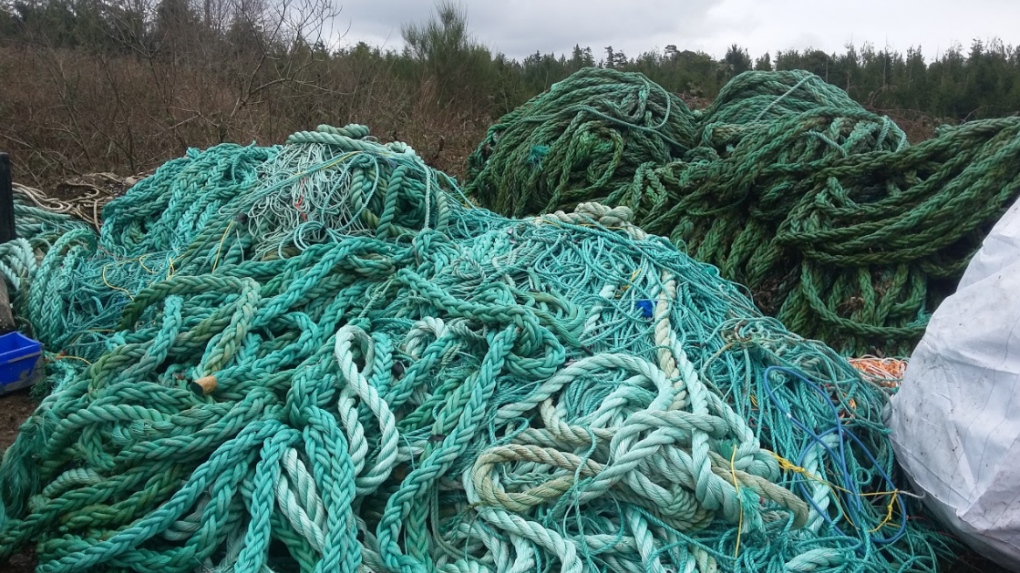 Fishing gear collected in 2020 from the Atlantic Ocean is shown in a handout photo from the Department of Fisheries and Oceans. THE CANADIAN PRESS/HO-DFO

HALIFAX -- Lost and discarded fishing gear dumped off the southwestern coast of Nova Scotia -- site of Canada's most lucrative lobster fishery -- is trapping species at risk and hurting the lobster industry, a new scientific study says.

Researchers at Dalhousie University in Halifax determined the abandoned traps, ropes, hooks and other equipment are costing the lobster industry nearly $200,000 annually in lost catches.

"When it starts impacting the bottom line of one of the most important industries in Nova Scotia ... it becomes apparent that we need to do something about it," the study's co-author, associate professor Tony Walker, said in an interview Friday.

"We can actually make more money if we clean up our act."

In 2019, the landed value of Nova Scotia lobsters was $880 million -- more than half of the Canada's overall total.

While the scourge of so-called ghost gear is a global problem, the study is described as the first of its kind to provide a preliminary assessment of its environmental and economic impacts.

The findings are based on what researchers found last summer and fall when five fishing boats were used to haul in more than seven tonnes of lost, discarded and abandoned gear. The vessels conducted 60 trips, covering 1,500 square kilometres.

Lobster traps made up the 66 per cent of the gear pulled to the surface. Other gear included cables, ropes, marker buoys and other marine debris.

The researchers calculated that the traps, often referred to as lobster pots, could be responsible for up to $176,000 in annual commercial losses because many of them continue to catch bottom-feeders long after they have been left behind.

"There's probably way more gear out there than this study suggests," said Walker, who is with Dalhousie's School for Resource and Environmental Studies. "Those economic losses are only going to increase."

As well, untended traps are continuing to indiscriminately capture other creatures, including groundfish considered species at risk.

"You get fish and crab in the lobster pots all the time," Walker said, noting that the traps are supposed to be checked every 24 hours to allow for the release of so-called bycatch -- the species other than market-sized lobster.

But if the traps are abandoned, an ugly cycle begins.

"If the (trapped creatures) die in place, then they themselves become fresh bait for other creatures to enter the trap. As long as the trap stays intact, that (cycle) can keep on going," Walker said. "Those (traps) older than four years old and still intact, continued to catch bycatch."

As a result, determining how many creatures have been captured by a derelict trap can be difficult.

"Our estimate of the diversity of species and the total number trapped is a massive underestimate," the Walker said."It's important that policy changes should be made."

Of the 15 different live species released from retrieved traps, five were species-at-risk: a wolffish, a cod, a cusk and two sculpins.

"It adds weight to the negative environmental impact," the researcher said. "These are federally protected species, and they're dying unnecessarily."

Walker said said fishers are typically reluctant to bring any traps to shore other than their own because they could face allegations of poaching.

Last week, Ottawa announced that its Ghost Gear Fund has been used to remove 224 tonnes of old gear from Canadian and international waters over the past two years. In all, 159 tonnes of gear has been pulled from the Atlantic and 65 tonnes from the Pacific coast.

Fisheries Minister Bernadette Jordan also announced that a new online system will make it easier for commercial harvesters to report the loss of fishing gear and its exact location -- as required by law.

"Not only will the ... system make it easier for harvesters to be part of the solution, it will help them recover their valuable gear, " Jordan said in a statement. "This is good for industry and good for our environment." Recreational fishers and the general public will be able to use the system at a later date, the department said.

This report by The Canadian Press was first published July 30, 2021.