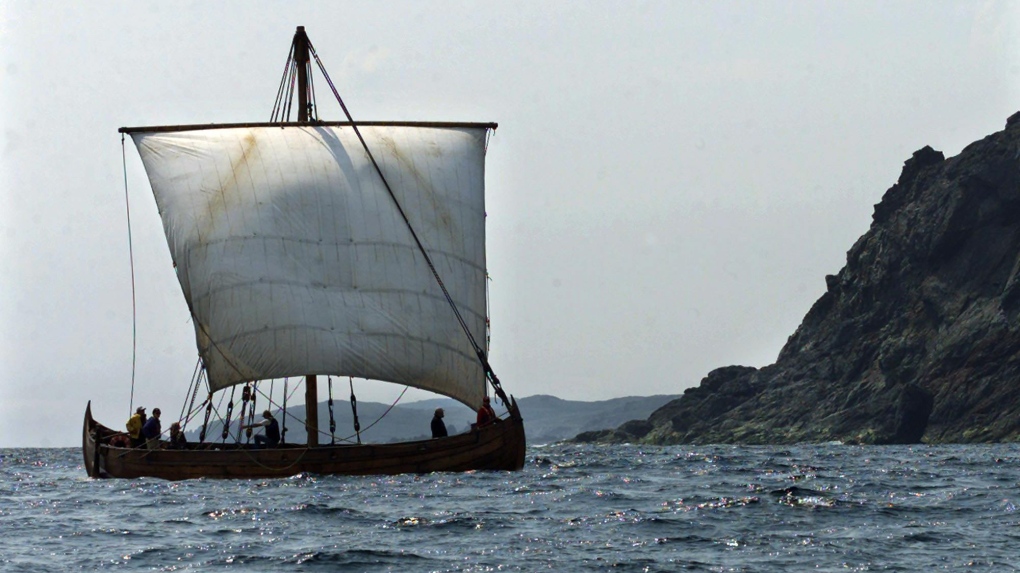 The replica Viking boat Snorri, built in Maine, heads past an island near L'Anse aux Meadows, N.L., in July 2000. The vessel was part of a flotilla that will travelled to the historic site with the Islendingur, a Viking longship, honouring Lief Ericson's voyages around the year 1000 AD.(CP PHOTO/Andrew Vaughan)
HALIFAX -

A groundbreaking study has confirmed Vikings had settled in a remote corner of northern Newfoundland by AD 1021, establishing for the first time a precise date for the earliest European habitation in the Americas -- exactly 1,000 years ago.

The remains of the small Norse settlement at L'Anse aux Meadows were unearthed in 1960 by Norwegian explorer Helge Ingstad and his wife, archeologist Anne Stine. But the methods used to pinpoint the date of construction were imprecise.

Until this week, it was believed the Norse encampment was established around AD 1000 -- a finding that prompted Canada's easternmost province to stage an elaborate re-enactment and festival in 2000 called, "Vikings! 2000."

That initial date of settlement was based on early radiocarbon dating techniques, the results of which were cross-referenced with analysis of the architectural remains and a handful of artifacts, as well as interpretations of Icelandic sagas written centuries after the Vikings had left the island.

"The buildings are typical of 11th and 10th century Iceland and Greenland," said Birgitta Wallace, a retired senior archeologist with Parks Canada who worked with Ingstad and his wife in the 1960s. "They're quite distinctive in shape and material and there were enough artifacts to confirm that."

As well, Ingstad and Stine found wood cut by metal tools, which were not made by the local Indigenous inhabitants.

But radiocarbon dating techniques at the time were lacking. "You got error factors of plus or minus 100 years -- even more sometimes," said Wallace, a co-author of the new study published this week in the journal Nature. "You couldn't even say if it was late 10th century or early 11th century."

Wallace stressed that the original AD 1000 date was never meant to be a precise declaration. "But this new method pinpoints the exact year," she said in an interview Thursday.

Using accelerator mass spectrometry, researchers re-examined tree rings in pieces of wood used to build the camp. They found some tree rings exhibited a pattern consistent with exposure to a solar storm that swept over Earth in AD 993.

"There was one year of solar activity that affected the growth of trees throughout the world," said Wallace, who specialized in Viking archeology in Sweden and the United States before she moved to Canada. "Those tree rings are really wiggly."

Wallace said it's important to understand that the new AD 1021 date represents a precise calculation of when the trees used to build the settlement were felled. There's no way to know how long the Vikings were in Newfoundland, either before or after that date, but it is widely believed that the settlement existed for a relatively short time.

Still, it is the first and only authenticated Viking settlement in North America, outside of Greenland.

The study's contributors, who include researchers from the Netherlands, Germany and Canada, found conclusive evidence from three different trees to support their cosmic radiation theory.

"Our result of AD 1021 for the cutting year (of the wood) constitutes the only secure calendar date for the presence of Europeans across the Atlantic before the voyages of Columbus," the study says.

The archeological find in 1960 turned Norse myth into historical fact. Led by Norse explorer Leif Ericsson, the Vikings' voyage to Newfoundland -- completed almost 500 years before Christopher Columbus would lay claim to the continent -- was described in two medieval Icelandic documents, the Saga of Erik the Red and the Saga of Greenlanders.

The site at L'Anse aux Meadows, managed by Parks Canada, was declared a UNESCO World Heritage Site in 1978.

When asked to explain why the latest findings are important, Wallace said the level of precision was key. "It's something we rarely have," she said. "There are always many uncertainties in archeology."