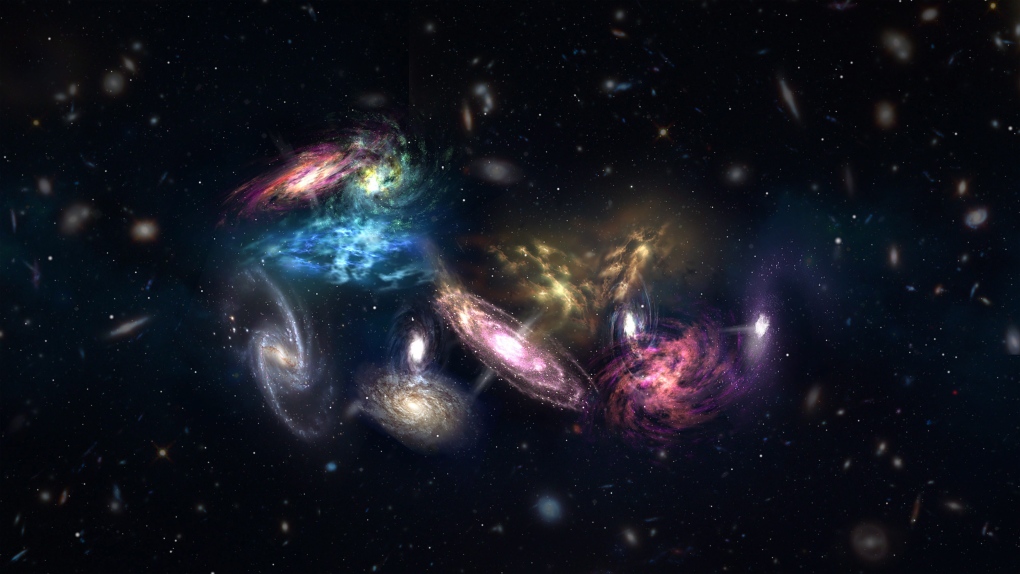 An artist's impression of the 14 galaxies detected by Atacama Large Millimeter/submillimeter Array (ALMA) as they appear in the very early, very distant universe are shown in this undated handout photo. (THE CANADIAN PRESS/HO - NRAO, AUI, NSF - S. Dagnello)

HALIFAX -- Astronomers have discovered the beginnings of a gigantic "cosmic pileup" in the far reaches of the universe, which could form one of the largest structures in the cosmos.

The team of Canadian and international scientists used a powerful telescope in Chile to spot the "impending collision of 14 young, starbursting galaxies" that will become a massive galaxy cluster.

The research, published in the journal Nature, says the so-called protocluster or group of galaxies is 12.4 billion light years away -- suggesting its light began travelling to Earth when the universe was 1.4 billion years old.

"Having caught a massive galaxy cluster in throes of formation is spectacular in and of itself," researcher Scott Chapman, an astrophysicist at Dalhousie University in Halifax, said in a statement..

"But, the fact that this is happening so early in the history of the universe poses a formidable challenge to our present-day understanding of the way structures form in the universe."

Chapman said until now, astronomers had theorized that protoclusters as large as this one would have taken much longer to form. But this formation has upended that thinking because it happened quickly and in a space only about three times the size of the Milky Way, he said.

Galaxy clusters are thought to be the largest objects in the known universe, with masses comparable to a million billion suns, the study says. They are bound together by gravity and can contain a thousand galaxies, dark matter, expansive black holes and extremely hot gas.

The clusters are considered rare and can have typical separations of 600 million light years.

"The distance to the closest big cluster (Coma) is 300 million light years, so we live in a relatively unpopulated region of the Universe," said Chapman.

The paper's authors say the discovery could shed light on how galaxy clusters form in environments characterized by hot, ionized gas.

"How this assembly of galaxies got so big so fast is a bit of a mystery -- it wasn't built up gradually over billions of years, as astronomers might expect," said Tim Miller, a doctoral candidate at Yale University and co-author of the paper.

"This discovery provides an incredible opportunity to study how galaxy clusters and their massive galaxies came together in these extreme environments."

The galactic cluster -- dubbed SPT2349-56 -- was first seen as a smudge of light in 2010 by the South Pole Telescope in Antarctica. That led scientists to follow up with the ALMA telescope, ultimately determining that the smudge was 14 galaxies located 90 per cent of the way across the observable universe.

"SPT2349 shows us that massive cluster formation can happen much more rapidly and explosively than simulations or theory have suggested," Chapman said.

"The incredible energetics are like 10,000 supernova going off at a time, quite literally."

The researchers found its energetic individual galaxies are forming stars up to 1,000 times faster than the Milky Way.

"In the short term, SPT2349 affords us a wonderful shortcut -- we can use SPT2349 as the initial conditions for a simulation of cluster formation and see what lessons can be learned," said Chapman.