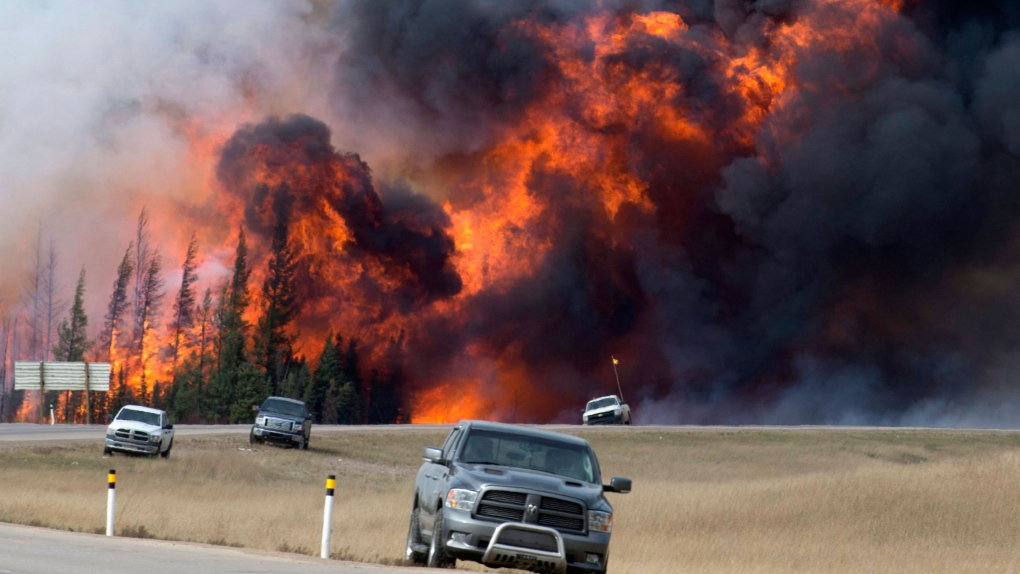 A wildfire burns south of Fort McMurray, Alberta on May 7, 2016. (Jonathan Hayward / THE CANADIAN PRESS)

FREDERICTON -- Atlantic Canadians who were forced to flee their homes and jobs in Fort McMurray because of raging wildfires say they're packed and waiting for the green light to head west again.

Officials in Alberta say a phased re-entry of residents into Fort McMurray is on track to begin on Wednesday.

The wildfire that forced more than 80,000 people out of their homes early this month was still officially listed as out of control, and has burned through almost 5,800 square kilometres.

Rooyakkers said she and her teenaged son Blake want to help with the reconstruction of her hometown. The storage company employee said moving and storage businesses will have a key role to play in the city's rebirth as people return and rebuild.

However, there have been delays as the city checks natural gas feeds, smoke damage and water supplies in the area. Rooyakkers says she's been told it could be up to two months before her employer is up and running.

Rooyakkers stays in touch with other evacuees in Nova Scotia and says she has participated in information sessions with government agencies on the status of Fort McMurray and the plans to return evacuees to their homes.

She says the wait has been "challenging," and friends are having adverse reactions as the frightening memories return. When a friend mentioned gathering around a campfire, Rooyakkers said she had to take a pass.

"I didn't want anything to do with it. It (the wildfire) does effect you mentally," she said.

Rooyakkers said initially her hope was for a quick return. But as the days passed, the magnitude of the damage sank in.

"You start to realize your city is not the city it was," she said.

In Springhill, N.S., Larry Coleman is also awaiting the okay to get back to his job of building scaffolding for other trades at Syncrude. Coleman said he has no hesitation about returning.

"Most of the area of concern is burnt, so it's not going to burn again. That damage has been done," he said.

Coleman said finding places to live will be difficult for many of the employees because many of the townspeople are being housed in the work camps. He says the housing shortage could impact the plans of some Atlantic Canada residents, like a friend of his who has a job waiting for him.

Colton Wood, a pipefitter from Havre Boucher, N.S., said he's anxious to return to his job with Syncrude. The 24-year-old said he and his brother will make tracks for Fort McMurray as soon as they get the call.

Wood said there will be lots of work to be done to get the plants up and running again, though some logistics are still up in the air.

"We're not 100 per cent sure where we'll be staying or what camp we'll be in. We'll find something for sure, they have to," he said.

Wood said while most of the co-workers he knows from Atlantic Canada will be heading back to Alberta, some have been able to find new work at home.

He said those returning have been told they will have to be fitted for masks because of the smoke still in the air.

Both Coleman and Wood said Fort McMurray was already a close-knit community, but will be even closer in the wake of the fires.

"I think it already has had that effect. That's about the only good thing that would have come out of it," Coleman said.