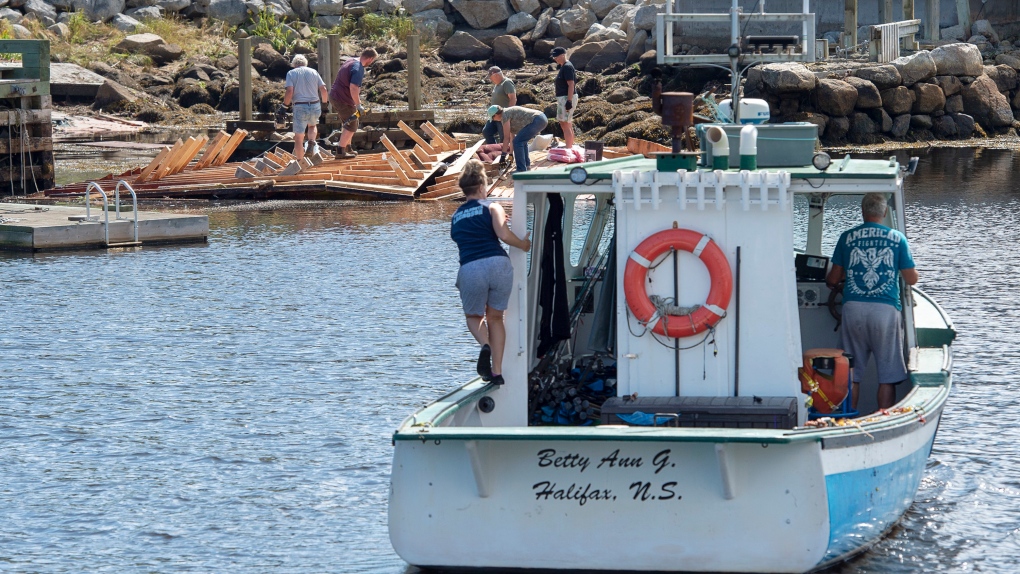 Residents recover furniture from their boat house that was swept into the waters of Herring Cove, N.S. on Tuesday, Sept. 10, 2019. (THE CANADIAN PRESS/Andrew Vaughan)

HALIFAX -- In an era when storms with hurricane-force winds are expected to keep battering Atlantic Canada, experts say the region should make major changes to electrical grids, shoreline defences and even the types of trees being planted.

Work continues today to reconnect customers after post-tropical storm Dorian knocked out power to 80 per cent of homes and businesses in Nova Scotia. By early afternoon there were 56,000 customers without electricity in the province, compared with 400,000 at the storm's peak on the weekend.

Recent scientific literature says 35 hurricanes -- not including post-tropical storms like Dorian -- have made landfall in the region since 1850, an average of one every five years.

Anthony Taylor, a forest ecologist scientist with Natural Resources Canada, wrote in a recent peer-reviewed paper that climate change is expected to increase the frequency of severe hurricanes.

He says promoting more mixed forests with hardwoods would reduce the rate of destruction caused by the storms.

Erni Wiebe, former director of distribution at Manitoba Hydro, says the storms should cause Atlantic utilities to rethink their view that burying lines is too expensive and to contemplate other long-term solutions.

Blair Feltmate, head of the Intact Centre on Climate Change at the University of Waterloo, says Atlantic Canada should also develop standards for coastline resiliency due to predictions of rising sea levels combining with the storms.

He says that would mean a more rapid refurbishing of sea walls and dike systems, along with more shoreline vegetation.

Feltmate also calls for an aggressive tree-trimming program to limit power outages that he says "will otherwise continue to plague the Maritimes."