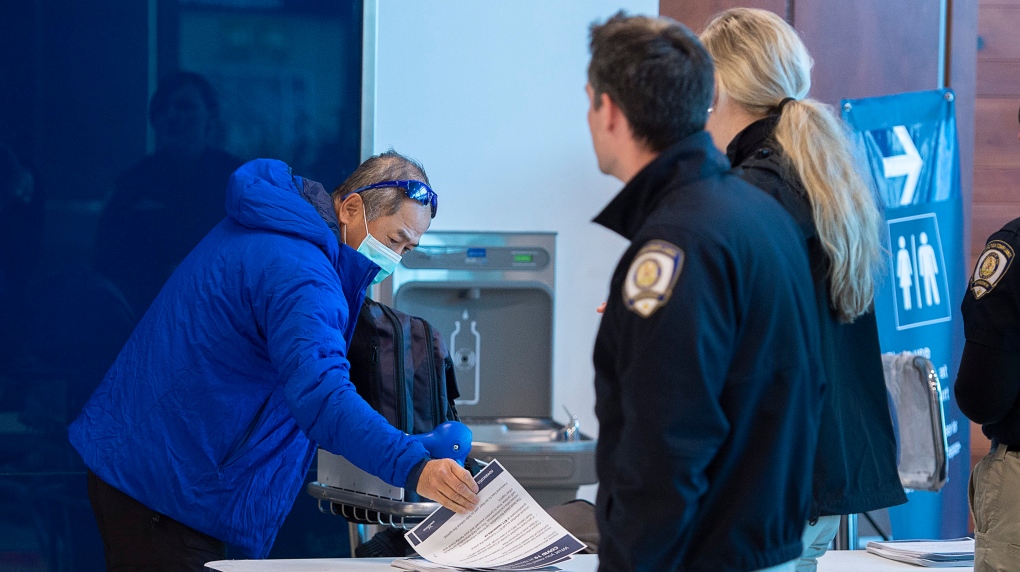 A man takes a pamphlet as public health inspectors greet passengers at Halifax Stanfield International Airport in Enfield, N.S. on Monday, March 16, 2020. The province has placed some restrictions on travellers in the effort to control the spread of COVID-19 in Nova Scotia. (THE CANADIAN PRESS/Andrew Vaughan)

HALIFAX -- Health officials and governments in Atlantic Canada stepped up measures to deal with the spread of COVID-19 on Tuesday, as three of the four provinces in the region reported several new cases.

Officials in Nova Scotia said they were dealing with two new presumptive cases of COVID-19, bringing the total number of positives in the province to seven, including one confirmed case.

"One is related to travel, their exposure was outside of the country, the other one was related to one of our previous cases," Dr. Robert Strang, the province's chief medical officer of health, said of the new cases.

Strang said the affected individuals are in self-isolation and are recovering at home. None of Nova Scotia's cases have had to be hospitalized.

Meanwhile, Premier Stephen McNeil said that effective immediately, all public gatherings would be limited to no more than 50 people. Beginning Thursday, restaurants would only be able to do takeout orders while all bars and pubs would be closed.

The province is also limiting the operating hours of Nova Scotia Liquor Corporation stores and is closing them on Sundays, McNeil said. Service Nova Scotia will close its centres for one week and extend the dates for the renewal of licences and vehicle registrations that expire in March, April or May until the end of August.

The Nova Scotia Health Authority said it is restricting access and suspending some health services, including elective outpatient visits and surgical procedures.

The region's largest children's hospital, the IWK Health Centre, said surgical procedures would be limited to urgent and emergency cases.

Officials said that as currently occupied inpatient beds become available, they will be held open to create space to establish COVID-19 units in designated hospitals.

Dr. Brendan Carr, president and CEO of the Nova Scotia Health Authority, said the system is ready for what's to come.

"Our teams have been working flat-out for three months to get ready for this," said Carr. "We know that it's imminent that we are going to have patients that are going to need to be in the hospital, and I think we are ready to bring those patients into the hospital and provide them with care."

Two more presumptive cases were also reported in Newfoundland and Labrador on Tuesday, bringing the total number of cases in that province to three.

Dr. Janice Fitzgerald, the province's chief medical officer of health, said the woman and man live within the Labrador-Grenfell Health region, which covers Labrador and part of Newfoundland's Northern Peninsula.

The cases are linked to contact with the province's first presumptive case that was announced on Saturday. Fitzgerald said the two new patients are household contacts of the first case.

Fitzgerald also said she is recommending the closure of public spaces including fitness facilities, arenas, bars and performances spaces. She said all St. Patrick's Day celebrations scheduled for later Tuesday should be cancelled.

Fitzgerald and Health Minister John Haggie encouraged residents to support each other and monitor their physical and mental health during what would likely be a long period of preventive measures.

"This will not be a short-term situation," Fitzgerald said.

New Brunswick also reported a new presumptive case of COVID-19 -- a boy under the age of 10 from the central part of the province who is a close contact to one of the province's two confirmed travel-related cases.

That brings to eight the total number of cases in New Brunswick -- two confirmed and six presumptive cases.

The province has closed all public access to correctional institutions to help prevent the spread of COVID-19. The restrictions include all members of the public, including inmate family members, volunteers and legal representatives.

Visitation to nursing homes and hospitals in New Brunswick is restricted to protect people over the age of 70. The Department of Social Development is moving 65 seniors now in hospital beds into nursing homes around the province.

Prince Edward Island still had only one confirmed case of COVID-19, but health officials issued an alert that anyone who was on West Jet flight 3440 on March 7 from Toronto to Moncton, N.B., should self-isolate.

P.E.I.'s chief health officer Dr. Heather Morrison said the woman who is the confirmed case on the Island returned on the flight after travelling on a cruise ship.

"There was a case of COVID-19 on that particular flight and they had mild symptoms on that flight," Morrison told a news conference in Charlottetown.

She said three other Islanders who had been on the cruise with the patient are in self-isolation and are reported to be doing well. Morrison couldn't say whether they were also on the flight back to the Maritimes.

She also announced that all restaurants and bars will be required to close in-room dining, while dental clinics will be closing for 14 days.

As well, wakes at funeral homes will be restricted to family only, with gatherings limited to no more than 20 people.

- With files by Kevin Bissett in Fredericton and Holly McKenzie-Sutter in St. John's

Met Gala postponed due to the coronavirus outbreak

Travelling back from Florida? Eight tips for snowbirds returning to Canada

Trump pushes for massive aid from Congress, checks to public

COVID-19 has now infected more Canadians than SARS did

'Like resting on a bed of nails': Restaurants on closing doors amid COVID-19

Conference Board says Canada to avoid technical recession despite hit

COVID-19 in Canada: What's closed due to coronavirus concerns

What happens if Trudeau becomes unable to fulfill the PM's duties?

These stores are reserving shopping hours for seniors