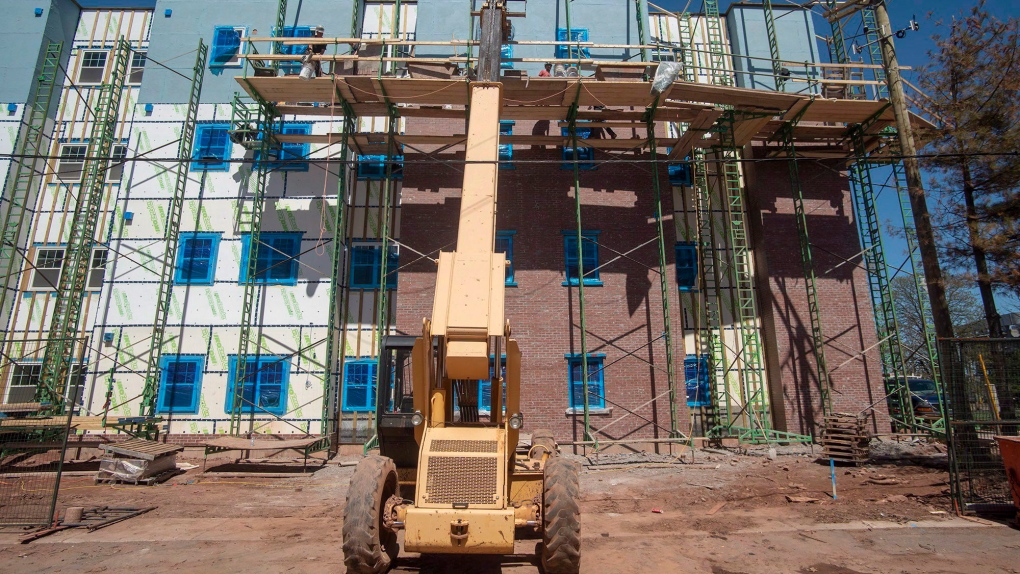 A crane delivers materials to the top of the scaffolding at this housing project in Charlottetown, P.E.I. on Wednesday May 16, 2018. (THE CANADIAN PRESS/Brian McInnis)

An Ottawa-based think tank is predicting rising growth for all four Atlantic provinces -- especially tiny P.E.I., which is expected to lead the country with 3.2 per cent growth this year.

The Conference Board of Canada attributes the rosy outlook to service-sector stability and rising exports in New Brunswick and Nova Scotia, while Newfoundland and Labrador is expected to record an uptick in oil production.

P.E.I.'s red-hot growth is credited to a boom in residential construction following an "influx of international migrants" and higher demand for Island products.

"Over the next two years, the Island should outpace nearly every other province in the country when it comes to its rate of population growth. Consequently, the construction industry is set to surge this year, thanks to new housing developments on the Island," the Conference Board said in its latest provincial outlook released Wednesday.

"Add to that the impressive tourism prospects and the elevated demand for P.E.I. products boosting exports and manufacturing, and economic growth in the province should continue to outpace the Canadian average -- a feat that P.E.I. has achieved every year since 2015."

The report noted the growth meant a recent surplus in the P.E.I. provincial budget, after a decade of deficits.

Newfoundland is predicted to grow by 2.7 per cent this year, but the Conference Board says oil industry volatility will mean growth of only one per cent in the province in 2020.

"The labour market will continue to struggle as baby boomers retire, projects come to the end of their life cycles, and workers in the service sector migrate to other provinces where their skills are in high demand," the report says of Canada's easternmost province.

It said Nova Scotia is on the road to a stronger economy, with hot seafood exports and improved demographics after an influx of people from across Canada and internationally.

"Over the next two years, the province is expected to enjoy its highest economic growth in almost a decade," the report predicted of Nova Scotia.

New Brunswick, which reported anemic growth of 0.2 per cent last year, is predicted to see growth of 1.4 per cent this year and 1.3 per cent next year.

"The biggest challenge to economic growth is the province's weak demographic profile," the report says of New Brunswick.

"Although immigration levels to the province have reached record levels, the large flow of residents to other provinces and a negative natural increase (i.e., births outnumber deaths) erase any potential gains in population."

Nationally, the Conference Board predicts 1.9 per cent growth this year, and 2.1 per cent in 2020.

It predicts weaker growth in Quebec, Ontario, Alberta and Manitoba, but robust growth in Saskatchewan and B.C.