Atlantic Schooners could begin their CFL tenure playing in Moncton 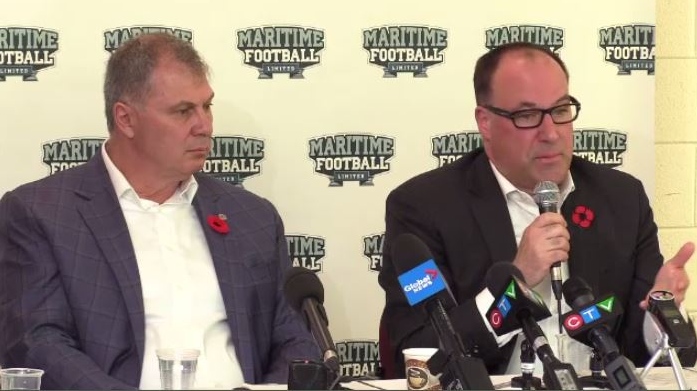 "Look, if all goes well and we have something in place by June, we want to seriously look at starting to play not obviously in the 2019 season but the 2020 season in Moncton," said Anthony Leblanc (right), one of three founding partners of the group.

If all goes to plan, the CFL's Atlantic Schooners will begin play in 2020 in Moncton, N.B., while a new stadium is being built in Halifax.

Schooners Sports and Entertainment (formerly Maritime Football Limited) is the group looking to secure a CFL franchise for Halifax, but the biggest hurdle it faces is the construction of a suitable stadium. Anthony LeBlanc, one of three founding partners of the group, said Tuesday talks continue with the Halifax Regional Municipality (HRM) regarding a 24,000-seat stadium proposed for Shannon Park.

LeBlanc said in a perfect world the Schooners would begin play in 2020. They'd stage their home games at Moncton Stadium until a new facility was completed in Halifax.

Moncton Stadium has 10,000 permanent seats but could be expanded to 20,725 via temporary seating.

"Look, if all goes well and we have something in place by June, we want to seriously look at starting to play not obviously in the 2019 season but the 2020 season in Moncton," LeBlanc said. "We've indicated to the city that our desire would be to play our first, and if need be our first couple of seasons, in Moncton while we have the stadium being built."

Moncton Stadium also is a leading candidate to stage the 2019 Touchdown Atlantic game Aug. 25 between the Toronto Argonauts and Montreal Alouettes. Other communities interested in the contest are Saint John, N.B. and Antigonish, N.S.

LeBlanc said the game won't be played in Halifax because there's no suitable venue there.

"I'd hope we'll have that finalized in the next week, two weeks tops," LeBlanc said. "The great news is these communities really want it.

"I'd say financially Moncton probably has the easier lift ... but this is a pretty bid deal for these communities. These are wonderful cities, you couldn't ask for a better place to be in Canada in late August. They want to show themselves off."

LeBlanc said his group has established a self-imposed deadline of the end of June to determine either to go ahead with the project or move on.

"We've kind of put a line in the sand," he said. "We want this thing either on its way or we've decided to pack up and go home by the end of June.

"That will be the two-year anniversary of my first series of meetings here in Halifax about this concept. Look, it's not a threat by any means. At some point you've just got to say, 'This thing is going to happen or it's not,' ... and I think June is that timeframe."

In October, Halifax council voted to take a closer look at a proposed 24,000-seat stadium. The preferred location is Shannon Park, a 38-hectare area of land on the east side of Halifax harbour that comes with an estimated price tag of between $170-$190 million.

"We feel now we can get this thing down closer to $130 million in a first phase that would be a very functional stadium just like BMO Field was when it opened," LeBlanc said. "Then we can look down the road and maybe get certain benchmarks for attendance.

"We're trying to just reduce the risk to everybody who's involved."

But there's more to it than just creating a sports facility. A stadium would simply be part of a much broader construction plan much like Ottawa's TD Place, which is part of a bigger real estate project involving a host of other venues.

"Where there's been a bit of a delay is understanding the elements of a larger mixed-use development around the stadium," LeBlanc said. "That's critically important to HRM because their contribution is based on an increase in property taxes around the stadium that wouldn't there if the stadium wasn't there.

"That's really the piece we need to finalize. It really does need to be a robust mixed-use development."

Until the stadium issue is rectified, the Schooners will refrain from hiring a vice-president of football operations. Last month, the club was expected to announce the appointment of former Hamilton GM Eric Tillman as its top football executive following his departure from the Tiger-Cats.

"It's unfortunate because we do still feel we're behind in starting to recruit on the football side," LeBlanc said. "But it's only fair we figure out if this is going to go or not before we start bringing on that calibre of person."

"We're been very, very bullish in our projections on how successful we think it could be in this market," LeBlanc said."I don't think we'd be quite that bullish to say we'd overtake (the Saskatchewan Roughriders) from a revenue perspective, but we think we'd be one of the top three teams in the league."