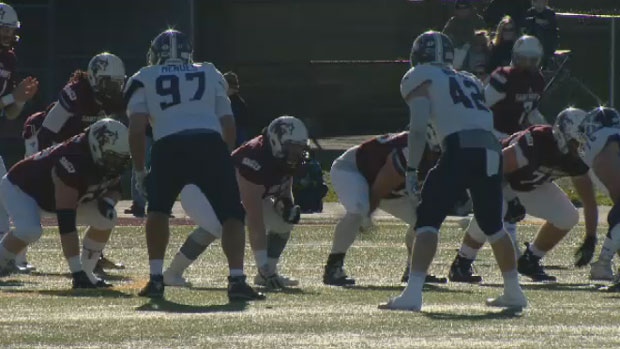 Football teams of AUS members Saint Mary's and St. FX are shown in this file photo.

HALIFAX -- Atlantic University Sport has announced it won’t proceed with “conference-sanctioned regular seasons or postseasons” for the rest of the 2020-21 season.

The organization says it will not host any championships either.

“We had hoped to be able to get to a place where we could see some semblance of a regular season and postseason take place for our winter sport student-athletes,” said Phil Currie, the executive director of AUS, in a news release Wednesday.

“Unfortunately given the current realities in many of our regions, and evolving public health directives, this won’t be possible.”

Schools will still be allowed to compete “at a level they’re comfortable with” with teams geographically close to them. AUS did not specify any requirements for how close these teams should be in order to compete.

AUS says it is up to each team to determine its own level of play, reminding that it must be in accordance with public health guidelines.

The organization says public health officials from all four Atlantic provinces gave feedback on the framework.

“With guidance and input from public health and building on a lot of the groundwork already laid regarding safe practices on our respective campuses, we were able to create a very thorough plan in a short window of time,” said John Richard, the director of athletics at the University of New Brunswick and the president of AUS, in the news release.

Richard served as chair of the Return-to-Play Committee.

“We’re still hopeful there will be a pathway for meaningful competition for many of our student-athletes this winter and we’re grateful the board has afforded us that opportunity,” he said.

AUS says all planned competition is subject to change or cancellation.