A young New Brunswick boy who wrote a letter to Santa for both himself and his sister received a reply that should put the author on the naughty list.

A rogue elf thought they would add a comment to the bottom of a letter – written from Santa – and sent it back to the boy.

"You certainly have a long list!” Santa said to the boy. “I think that you are forgetting about the true meaning of Christmas. It is not receiving gifts, but giving from your heart. Two letters is too many."

The mother of the youngster told CTV News that her son thought he had done something wrong "to make Santa mad."

When CTV News asked Canada Post about the letter, the crown corporation said another one from Santa will soon be on the way.

“T’was days before Christmas and in one little letter, an elf thought he was helping but should have known better,” the Canada Post wrote. “Santa sprang to his desk to write a new note, then placed it in an envelope with a special stamp from his coat.”

“He gave it to Canada Post with a whistle. It's now flying on its way, like the down of a thistle.”

Officials at Canada Post familiar with the North Pole also tell CTV News it's rare to have a grumpy elf, but it has happened before. 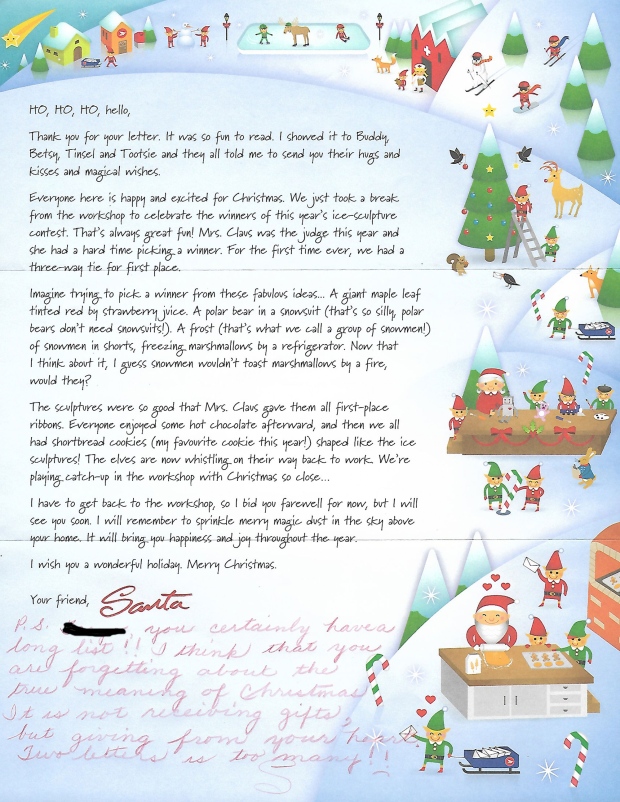