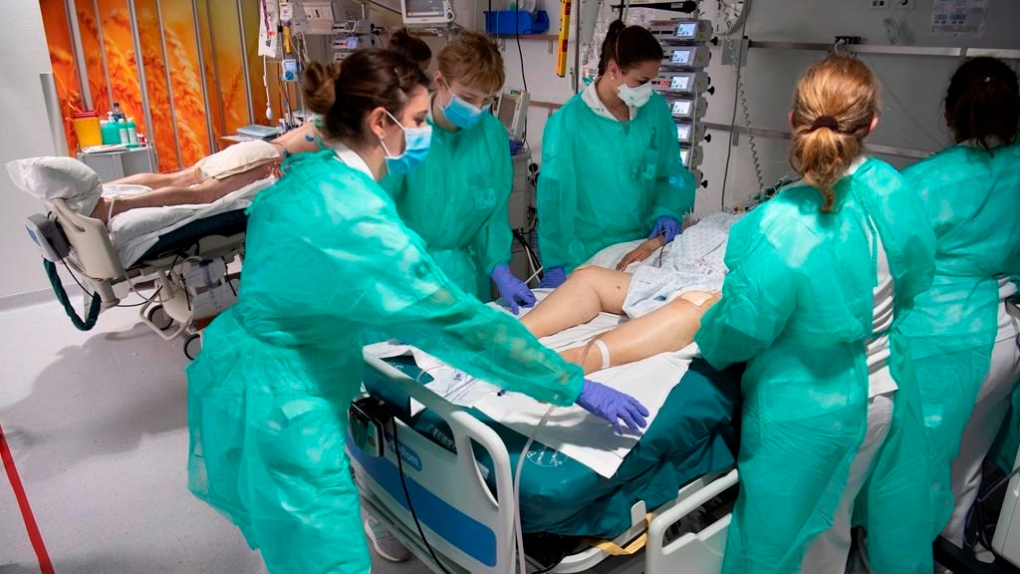 Medical workers treat a patient with COVID-19 in the intensive care unit at the University Hospital (CHUV) during the state of emergency of the coronavirus disease (COVID-19) outbreak, in Lausanne, Switzerland, Friday, April 3, 2020. Being a smaller East Coast province in the pandemic is a double-edged sword: there are fewer critically ill patients, but a limited supply of beds in the worst-case scenario. THE CANADIAN PRESS/AP-Pool Photo via AP

HALIFAX -- Being a small East Coast province in the pandemic is a double-edged sword: there are fewer critically ill patients, but the supply of hospital beds is limited if the worst-case scenario materializes.

"We will have fewer beds, but we will have a lower population density too," said Dr. Ward Patrick, the head of critical care at the Nova Scotia Health Authority -- the biggest health agency in Atlantic Canada.

The 60-year-old veteran of intensive care medicine said in an interview his teams have access to an existing supply of 120 intensive care beds provincewide -- each equipped with ventilators and staffed by specialized health workers.

In addition, the province's intensive care units have been emptied by 50 per cent to prepare for COVID-19 patients, and Patrick says Nova Scotia could surge to over 200 intensive care beds as the pandemic progresses.

However, he also acknowledged there are "wild cards," ranging from unanticipated jumps in infections to finding replacements for sick staff.

His health authority has created scenarios where 7,000 of its 23,400 staff are off due to self-isolation or illness, and Patrick said he's aware of estimates that could go higher.

Janet Hazelton, the president of the Nova Scotia Nurses' Union, said she believes the Atlantic provinces could face some of Canada's biggest staffing issues.

"We don't have enough that we can move them all over, as in some of the biggest provinces," she said during an interview.

An outbreak from two gatherings at a funeral home last month in St. John's, N.L. -- which has generated nearly three quarters of the province's 195 infections -- illustrates another key risk when ICU beds are at a premium.

Gilles Lanteigne, the chief executive of the Vitalite Health Network in New Brunswick -- which serves the province's francophone population -- says intense outbreaks in one location are the most worrying scenario for smaller health agencies like the one he oversees.

"The average age of our population is very old, and we have some regions where people are not as healthy when compared to the average region in the country," he said in a telephone interview.

"Clustering, if that ever happens ... it could cause almost a disaster. It could increase significantly the cases."

His agency has 33 intensive care beds prepared for COVID-19 patients, with a capacity to surge in two stages to a total of 116, he said. Horizon Health Network, New Brunswick largest health authority, has 98 intensive care unit beds in place, 53 of which are currently occupied.

Newfoundland and Labrador has 98 such beds, and four COVID-19 patients were in intensive care Friday.

Dr. John Haggie, the minister of health in the province, has said repeatedly he believes his province can cope, but this week he added: "Whether we're right, ask me in three weeks' time."

Javier Sanchez, an epidemiologist at the University of Prince Edward Island's faculty of veterinary medicine, sees some hope emerging for smaller jurisdictions.

Though he's a veterinarian, Sanchez's expertise has been called upon to help with COVID-19 modelling for the Island's population of 156,000. He said with just 22 positive cases and no community transmission as of Friday, P.E.I. may be exhibiting "a unique situation."

He said there's little doubt a concentrated outbreak could challenge the Island's two hospitals, which have just 17 intensive care beds and a capacity to bring on 46 additional units if needed.

However, Sanchez said unlike large urban centres, the Island, with a single bridge linking it to the mainland, has the advantage of being able to tightly restrict entry of people from other jurisdictions.

He also suggests a rural population is likelier to succeed in social distancing than large cities, and breaking the rules would be more quickly detected.

"In P.E.I., everyone knows everyone, so if you have to self-isolate and you're going around, somebody will know you," he said.

Lanteigne says New Brunswick's Acadian population's advantage is "the population is dispersed." With the exception of Moncton, "we don't have very large cities with high-rise buildings," he said.

To date, there's little clear indication of when the Atlantic provinces expect their critical care capacity will face its greatest test.

Nationally, figures cited by the chief public health officer of Canada have suggested about three per cent of the current infected population will become critically ill.

New Brunswick, Nova Scotia and Prince Edward Island have committed to releasing models next week showing the best- and worst-case scenarios they are working with, and when the peak of the pandemic is forecast.

Dr. Robert Strang, the chief medical officer of health in Nova Scotia, has said technical expertise is in short supply to create the models.

"It's a busy time. But we're going to see this through," he said.

This report by The Canadian Press was first published April 3, 2020