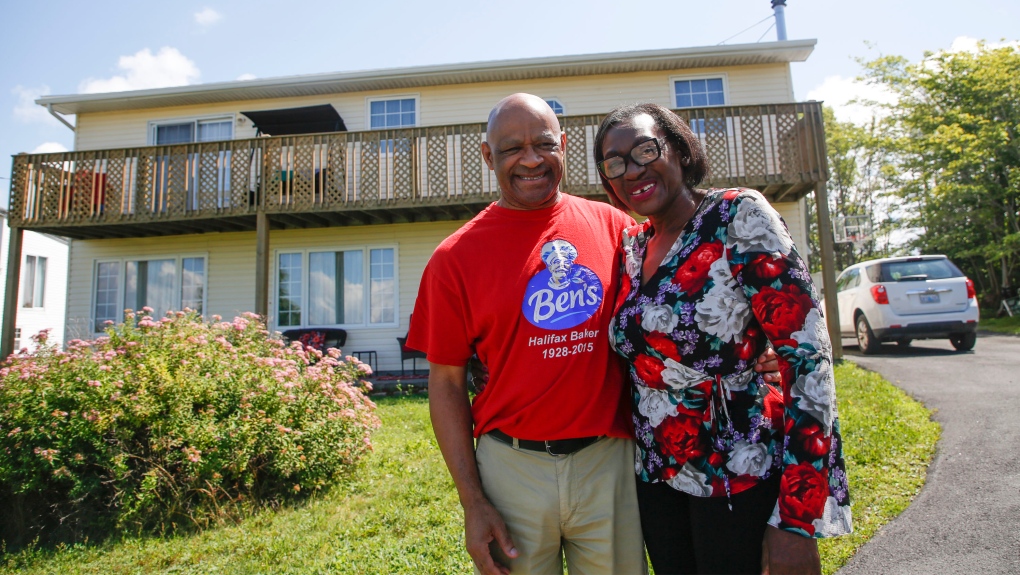 Christopher Downey and his wife Chrissy pose in front of their home in North Preston, N.S., Saturday, August 1, 2020. Christopher Downey finished building his home in 2002 on a parcel of land in North Preston, N.S., that has been in his family for generations. But it was only in late July that Downey says he found out the province intends to issue him a certificate of claim to the land upon which his house was built, the first step in his years-long fight for title. THE CANADIAN PRESS/TIM KROCHAK

HALIFAX -- Christopher Downey finished building his home in 2002 on a parcel of land in North Preston, N.S., that has been in his family for generations.

But it was only in late July that Downey says he found out the province intends to issue him a certificate of claim to the land upon which his house was built -- the first step in his years-long fight for title.

"It's been a long journey, but the truth always prevails, and I think it came down to just the government doing the right thing," the 66-year-old said in a recent interview.

Downey is among scores of African Nova Scotians who have struggled for years to have their title claims recognized. But now, after he won his case in Nova Scotia Supreme Court, the province says it is going to make it easier for Black Nova Scotians to settle land claims.

The problem dates back to the 1800s when the Nova Scotia government distributed land to white and Black Loyalists -- people who stayed loyal to the British Crown and moved to Canada following the American Revolution.

Downey said his ancestors fought alongside the British in the War of 1812 on the promise they would be granted land in what is now North Preston.

Yet while white settlers received title to fertile ground in present-day Nova Scotia, their Black counterparts were allowed to use and occupy the lands they were given, but were not granted legal title.

In 1963, Nova Scotia passed what is now known as the Land Titles Clarification Act, which aimed to provide African Nova Scotians with a pathway to legal ownership of lands that in many cases had been in their families for decades.

The act applies to 13 predominantly Black communities, including Cherry Brooke, East Preston and North Preston, all on the outskirts of Halifax. But lawyers, human rights advocates and African Nova Scotian communities have long complained of a burdensome, costly and time-consuming process to apply for title.

Downey took his case to the Nova Scotia Supreme Court, which last month ordered the government to reassess his application for a certificate of claim after it was rejected on the basis the father of four could not prove he had lived on the land for 20 consecutive years.

The court said the government was unreasonable in applying that standard, known as adverse possession, in Downey's case. Downey's great-grandfather, Peter Beals, and wife, Heidi, settled on the land in 1913, the ruling states.

"African Nova Scotians have been subjected to racism for hundreds of years in this province," Justice Jamie Campbell wrote in the decision. "That has real implications for things like land ownership. Residents in African Nova Scotian communities are more likely to have unclear title to land on which they may have lived for many generations."

Downey said he and his wife, Christselina, were "overjoyed" by the court's decision. "The impact is tremendous ... With this case, we feel that now it will open the door for most of the residents in this community to actually obtain their certificate of claim," he said.

Scott Campbell, the lawyer who represented Downey at the Supreme Court, said the minister of lands and forestry will issue Downey a certificate of claim "subject to the resolution of any outstanding liens," or any debts that have been registered against the land.

"While we're not there yet, this is a significant step forward and we appreciate the minister's efforts in this regard," Campbell said in an Aug. 4 email.

Lisa Jarrett, spokeswoman for the Department of Lands and Forestry, told The Canadian Press in a July email the province had accepted the Supreme Court's decision in Downey's case and was working to quickly change its adverse possession policy. Jarrett later confirmed on Aug. 5 the government was finalizing Downey's certificate of claim.

The province is looking at whether the 20-years adverse possession test affected other applicants, but Jarrett did not say how many people could have been impacted. Nova Scotia has received over 360 land claims to date, she said, and the owners of 130 parcels of land have received title.

"We will continue to look for ways to streamline this process and remove barriers wherever possible," Jarrett said.

Campbell said the government indicated in court it had applied the 20-years adverse possession test since at least 2015 -- meaning many families may have had their claims denied on that basis. He said he hoped the court's ruling would push Nova Scotia to engage with historical experts and Black community members to better understand how to implement the 1963 Land Titles Clarification Act.

"With all of that information, my hope is that it will provide the minister and his department with a framework by which they can more appropriately and fairly assess applications," Campbell said.

Downey said while his certificate of claim is nearly approved, he and his family still have several steps ahead of them before they can get ownership of the land.

After a certificate of claim is issued, a notice must be posted to allow anyone wishing to make their own claim to the land to come forward. If there are no competing claims, then a certificate of title can be issued.

But Downey said his case shows the government can -- and should -- recognize the land claims of African Nova Scotians.

"People have actually died waiting, so it doesn't have to come to that."

This report by The Canadian Press was first published Aug. 9, 2020.