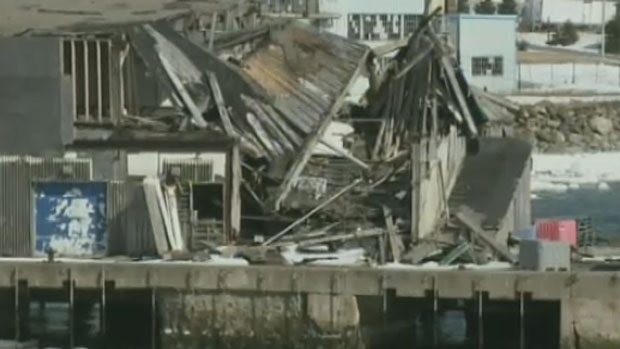 Cod-laden trawlers once landed their catches at the former National Sea plant in Louisbourg, but boats now steer clear of the area. (CTV Atlantic)

Debris from a dilapidated former fish plant is falling into a busy Cape Breton harbour, causing concerns about navigation. The mess is also a terrible eyesore in the tourism town.

“Obviously, this building is falling down,” says Lloydette MacDonald of the Louisbourg Harbour Authority. “It is going into the harbour. What’s that creating?”

Cod-laden trawlers once landed their catches at the former National Sea plant in Louisbourg, but boats now steer clear of the area.

“There have been reports that some vessels have seen debris floating in the harbour,” says MacDonald. “I’m assuming, that if you look at this building, the only place for it to go is into the harbour.”

The former plant is located on the main street of the town and shares the same harbour shoreline as Fortress Louisbourg, which is gearing up for the town’s 300th anniversary.

“The owner of this company should be ashamed of himself,” says Coun. Kevin Saccary. “To come into town and do business and have the community co-operate and then walk away and leave this, it is not right.”

One of the former fish plant’s nearest neighbours is a popular seafood restaurant. Its owner, Jim Devries, is not happy with the view afforded diners as they enjoy lobster and crab at his establishment.

“This is the view from the deck of our restaurant in Louisbourg,” says Devries. “They are kind of disappointed in how nice everything is in the area, then they look out the window and see this.”

The Cape Breton Regional Municipality will try and sell the plant again during a tax sale early next month. One official says there is interest in its equipment, but so far, no one wants to buy the property itself.