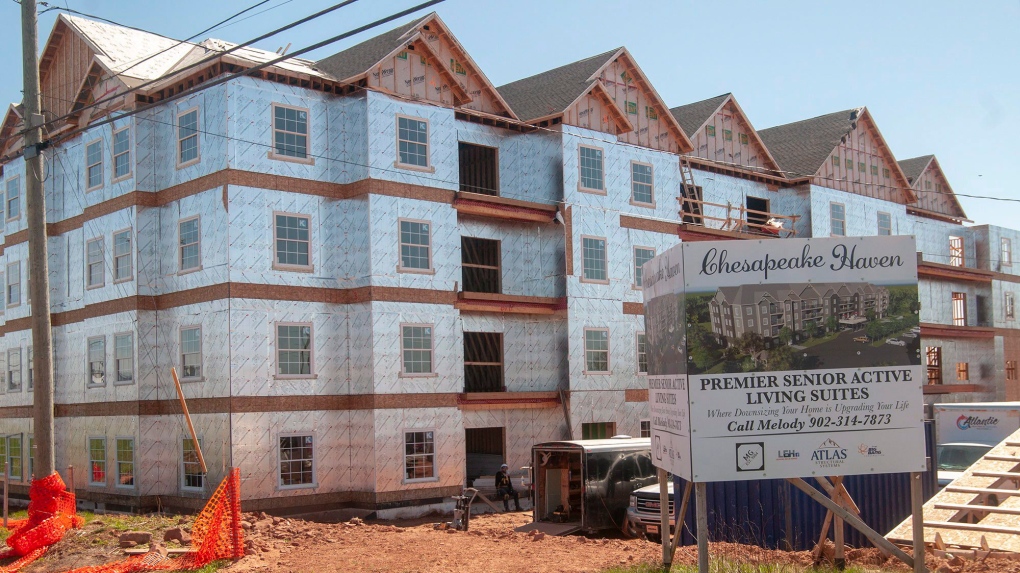 A worker takes a break on Wednesday May 16, 2018 at this seniors housing site on the outskirts of Charlottetown, P.E.I. (THE CANADIAN PRESS/Brian McInnis)

CHARLOTTETOWN -- Tourists visiting tidy, bucolic Prince Edward Island should keep their eyes open for some swagger this summer: The smallest province is on a tear.

An expected steady rhythm of hammers and saws is just one indicator of an economic boom.

Retail sales on the Island were up 7.4 per cent last year, and employment grew by three per cent and continues to grow at that pace.

Wages grew by 3.6 per cent over the past year -- third in the country behind only British Columbia and Ontario. The island is aiming for its fifth straight year of record tourism

Chris Palmer, minister of economic development, said the Island has seen a fundamental change in attitude.

"We've got tremendous skill sets of folks who are here. We are inviting people with new skill sets to come to P.E.I. They're coming here and thriving. They're creating new employment. They're spending money," he said.

Bergman said there is no one single reason for the boom, but a number of sectors including the fishery and tourism are doing very well.

"The value of the lobster catch at the wharf would be up 50 per cent in two years," Premier Wade MacLauchlan, who brought in the Island's first balanced budget in a decade last year, said in an interview. "That in turn is money people spend on their vehicles, on homes, dining out and improving their communities."

The Island only has about 150,000 residents, or about the same as Trois-Rivieres, Que., but it has the strongest population growth in the region.

Some of that credit goes to immigration. The province's immigration nominee program has been harshly criticized as flawed because it grants permanent residency before there's proof the immigrants have actually stayed on the Island, but P.E.I.'s growing diversity cannot be denied.

"The number of immigrants per 1,000 people on P.E.I. showed that once again they led the country in terms of immigration rate. About 2,350 permanent residents went to P.E.I. last year, so that's a measure of immigration," Bergman said.

Housing starts on the Island increased by 64 per cent last year -- compared to a national average of 11 per cent.

"This year is looking like an amazing year again in construction, both on the commercial and residential side," said Sam Sanderson, general manager of the P.E.I. Construction Association.

And with a vacancy rate of less than half of a per cent, Sanderson expects 2018 will be busy. The industry is in fact facing a shortage of skilled trades people, and Sanderson said efforts are being made to train more Islanders in the trades and to recruit more to move to the Island.

Palmer said there are opportunities in the province that weren't there when he was growing up. He said many Islanders who moved away in search of work are now moving home and bringing the jobs with them.

"I was one of those. I was in IT in Moncton for five years and Halifax for five years. I couldn't wait to get back. I was able to come back and do the kind of work I was doing somewhere else. I could do it from P.E.I.," he said.

The Conference Board of Canada has touted a "strong demand for P.E.I. products" that is bolstering its manufacturing sector.

Among the success stories: Sekisui Diagnostics, a global company -- based in Japan -- that makes reagents for medical testing.

The company bought an existing bioscience company in Charlottetown in 2011 and seen steady growth ever since.

Every year, Sekisui produces 1.5 billion clinical chemistry tests in P.E.I. that are then shipped around the world.

"Since 2011 our revenues have grown about 225 per cent. We've added about 50 full time staff. (Now 123 in total) We just went through a multi-million dollar expansion and are potentially looking at another expansion," said plant manager Brian Stewart.

He said the Charlottetown facility is more cost competitive than their plants in Japan, so more of the company's volume is being moved to P.E.I.

MacLauchlan said exports from the small province hit an all-time high of $1.38 billion in 2017, with year-over-year growth of 4.6 per cent.

"We think that can continue," the premier said, noting that efforts are being made to grow markets in Europe and Asia.

"I'm very confident that it can continue to grow and to reflect the success that we're having. Success brings success."

-- By Kevin Bissett in Fredericton