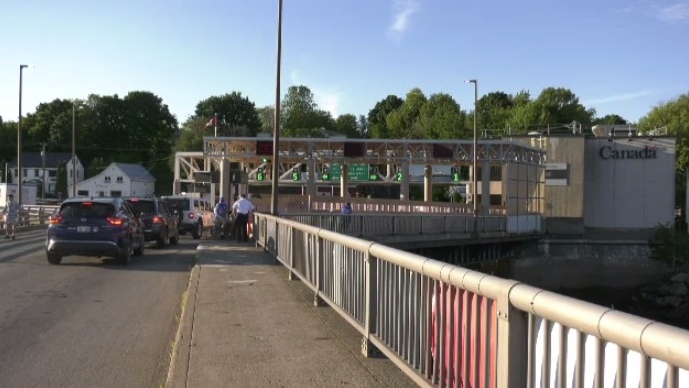 The first update in 27 years at one of the land border crossings between St. Stephen, N.B. and Calais, Maine, is expected to create traffic delays, especially during peak travel times.

Only one inspection booth is currently operating on the Canadian side of the Ferry Point Bridge and it will remain that way until February 2023, when construction is set to finish.

The Canadian crossing’s three former booths will become two modern booths upon completion, according to the Canadian Border Services Agency. The agency is advising travellers to consider using two other crossings in the area.

The construction is the latest in a string of recent developments at New Brunswick and Maine border crossings.

In March, hours were cut at the nearby Milltown border crossing in St. Stephen, N.B. from 9 a.m. to 5 p.m. seven days a week, including holidays.

Further north, hours of service at the Grand Falls, N.B. crossing into Hamlin, Maine were cut, from 7 a.m. to 7 p.m. ADT, seven days a week, including holidays.

In May, the Gillespie Portage border connection linking Canada to Limestone, Maine re-opened after closing entirely due to COVID-19 travel numbers. The closure first began in July 2021.

This fall, hours of operation on the U.S. side of the Vanceboro, Maine, and St. Croix, N.B. crossing are expected to be reduced.

Meanwhile, construction of a brand new international bridge between Edmundston, N.B. and Madawaska, Maine is ongoing. Traffic is expected on the new bridge by the end of 2023.

North Korea on Sunday fired a short-range ballistic missile toward its eastern seas, extending a provocative streak in weapons testing as a U.S. aircraft carrier visits South Korea for joint military exercises in response to the North's growing nuclear threat.