HALIFAX -- Gender-reveal parties are about to get saucy!

Nicholas Nahas, vice-president of King of Donair, came up with the idea of using donair sauce for a gender reveal last year while browsing the internet.

“Donairs are a fun food item, they originate here in Halifax, it really resonates with people from here and Haligonians who have moved away as well,” says Nahas.

“People get crazy online with these reveals, so I thought, why not?”

After that, the waiting game began.

Nahas wanted to find the ideal fun, food-loving couple for his first attempt at a donair gender-reveal party.

That couple ended up being his brother and sister-in-law. 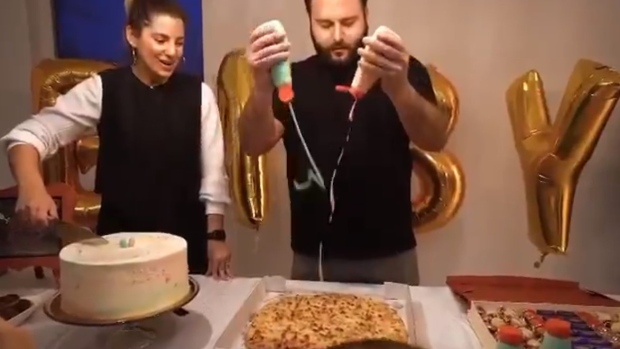 Andrew and Nina Nahas held a donair and pizza-themed gender-reveal party for their loved ones. (King of Donair/Facebook)

“I wasn’t too excited about a gender reveal to begin with,” says father-to-be Andrew Nahas.

“My wife probably figured this was the only way I would do it. She brought me a few options and I said, ‘No, no, no.’ Then this one came up and certainly there was no way to say no to it.”

Andrew and Nina Nahas held a donair and pizza-themed gender-reveal party for their loved ones.

When it came time to reveal the surprise, Andrew was the only person in the room who knew the baby’s gender.

“We had a garlic finger and I had a bottle of pink and a bottle of blue donair sauce and I squirted the appropriate one at the end of the countdown,” he explains.

Blue donair sauce covered the garlic fingers as the room erupted in cheers and applause.

“In the end, the most Haligonian way of introducing your baby to the world was the donair reveal, so why not?” says the soon-to-be dad.

The couple is expecting a baby boy in June. 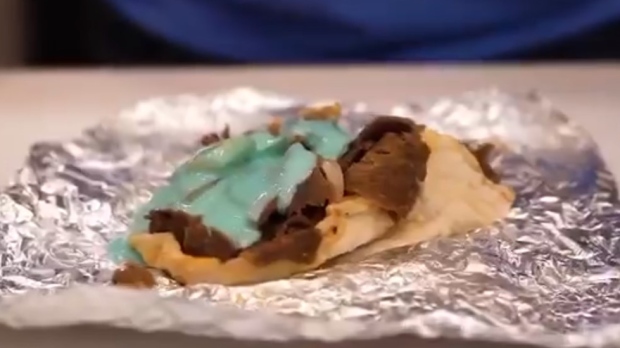 King of Donair’s vice-president says there are a variety of ways to enjoy the sauces at a gender-reveal party.

“We have someone next month, they’re going to give us an envelope with what the gender is, and so they have no idea what it’s going to be so we’ll see if it’s a boy or girl,” explains Nahas.

“We’ll put the appropriate sauce colour in their donairs so when they unwrap it – that’s the surprise right there.”

They also have two spots in Edmonton, one in Grande Prairie, along with one in Saskatoon.

The specialty sauces will be available in all King of Donair restaurants. They sell for $4.99 a bottle and tastes just like regular donair sauce.