Bud the Spud, founder of famous chip wagon, dies at 77 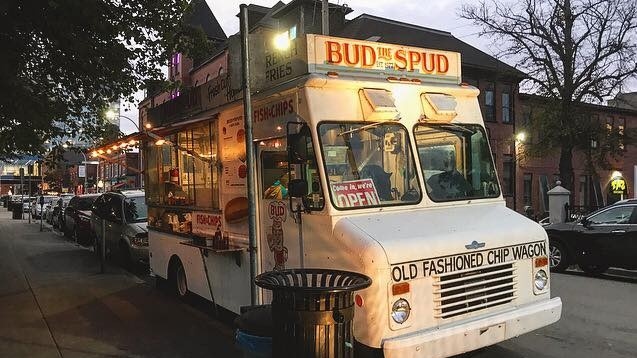 Over the past 40 years, the "Bud the Spud" food truck, shown in a handout photo, in downtown Halifax has become a local landmark, known for its mouthwatering french fries and long lineups. The man who started the business in 1977, Leonard (Bud) True, died last Saturday at the age of 77. (THE CANADIAN PRESS/HO-Facebook-Bud the Spud)

HALIFAX -- Over the past 40 years, the "Bud the Spud" food truck in downtown Halifax has become a local landmark, known for its mouthwatering french fries, long lineups and the outgoing man who made the business a lunchtime mecca.

Gary Burke, Bud's nephew, says Bud and his wife Nancy worked as a team for 32 years before they sold the truck and retired in 2009.

"Nancy and Bud were really the Bud the Spud team," Burke said in an interview Friday, adding that the couple usually worked seven days a week, though they dropped to six days in their final years on the job.

"Summers for them were gruelling."

They lugged huge sacks of P.E.I. potatoes and kept the deep fryer boiling at full tilt -- even on the hottest days. Though Bud and Nancy would travel in the winter months, the long shifts took their toll. Bud had two hip replacements during his career.

"I was a little kid in 1977 when they first got the truck ... and we would come up to Nova Scotia every summer," says Burke.

"We'd visit Bud the Spud's truck. He was my uncle, but he also made amazing fries .... There were lineups all the time."

Though the venerable chip truck shares its name with the famous song by Stompin' Tom Connors, Leonard True was known as Bud long before he bought his first truck in 1977.

Despite the long hours between May and September, Bud remained a friendly and gregarious man whose commitment to quality never waned, Burke says.

"He was always cheerful, always jovial -- even when he was working in the truck for 12 hours a day," says Burke, who now lives in Bedford, N.S.

"He visited other countries and tried their fries. The Belgians have a pretty good reputation for making fries, and he learned from them."

As for how Bud the Spud made what some claim were the best fries in Halifax, Burke says the key to the port city delicacy was in the preparation. Before the sliced potatoes were placed in the fryer, they were blanched.

Though Bud received many offers to expand his business, he was never interested.

"There could have been a Bud the Spud in every food court in Canada," Burke says. "But he was always focused on running the business as well as he could. He stayed small and local."

"So many of my regular customers still talk about Bud -- and Nancy, of course -- with genuine affection," he said Friday in a Facebook post.

"Bud was a pioneer in the local food truck industry and has made his truck into a Halifax institution."

This report by The Canadian Press was first published Feb. 28, 2020.