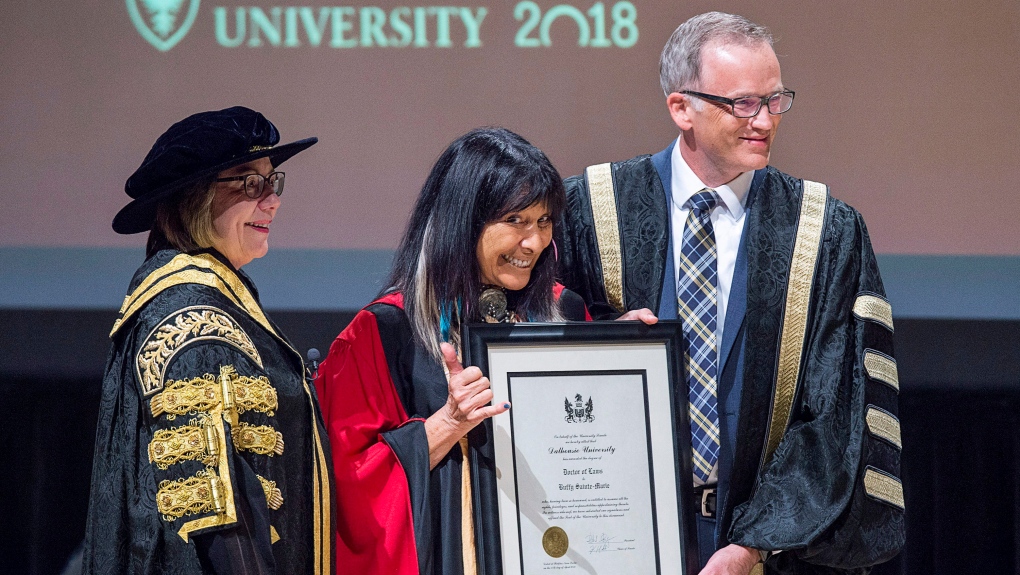 HALIFAX -- The road to reconciliation must include empathy and patience from both Indigenous and non-Indigenous people, famed Aboriginal singer-activist Buffy Sainte-Marie said Tuesday as she touched on a legacy of racism she has been fighting much of her life.

The award-winning songwriter told a Halifax audience that decolonization is a shared effort between the descendants of European settlers and Indigenous people, and Aboriginal people should teach others about injustice in a compassionate and non-combative way.

Indigenous people need to understand that much of "settler racism has to do with not knowing," she told the sold-out crowd.

In effect, Sainte-Marie said people in conflict should treat each other as if they were children and didn't know about Canada's painful history of Aboriginal relations.

"Don't devalue people because of their immaturity or their lack of knowledge -- that's what you're there to remedy," Sainte-Marie said in an interview with The Canadian Press. "You're there to teach, not to scold."

The celebrated Indigenous singer issued the appeal prior to a presentation ceremony at Dalhousie University, where she received an honorary doctorate of laws.

"Even though things have changed a lot, the good news about the bad news is that more people know about it now," she said.

"It's going to take compassion and empathy and good hearts in both communities to ripen Canada into the way it could be."

The singer, who now lives in Hawaii, reflected on her long journey to draw attention to the plight of Indigenous people.

"It took 50 years for the general public in Canada to address these issues," she said. "I think a lot of people have been on the edge of understanding."

Sainte-Marie, who is also an educator, offered a lesson she learned from many years as an activist: "Wait until the buffalo chips have dried."

In other words, she said, patience will heal all wounds, and bitterness and guilt should be allowed to dry out.

"There are ways to decolonize that go far beyond the imaginations of defensive or fearful people."

"I've been dealing with these issues my whole adult life, and you know what, it hasn't killed me yet," she said.

Sainte-Marie, who was born on the Piapot Plains Cree First Nation reserve in Saskatchewan, gained fame for her folk music in the 1960s that addressed issues plaguing Indigenous people, including lack of access to education, civil rights and social genocide.

She also made regular appearances on "Sesame Street," and founded the Nihewan Foundation for American Indian Education as well as the Cradleboard Teaching Project.

Sainte-Marie won an Oscar for writing "Up Where We Belong," a song performed by Joe Cocker and Jennifer Warnes for the film "An Officer and a Gentleman." In 2010, she and rocker Bryan Adams were among the recipients of the Governor General's Performing Arts Awards for lifetime artistic achievement.

"Sainte-Marie's career is a category of firsts," Kevin Hewitt, Dalhousie's chair of the Senate, said in his introduction of the singer.

Tuesday's forum was part of Dalhousie's 200th Year of Belonging, an initiative that aims to generate discussion about inclusiveness on the university campus.