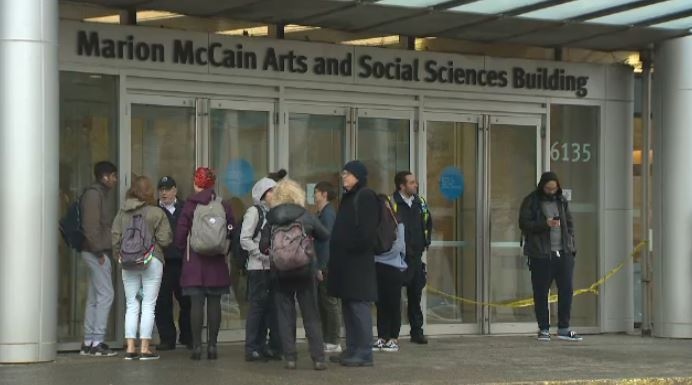 The Marion McCain Arts and Social Sciences Building on the Dalhousie University campus in Halifax was evacuated due to an issue with the water supply on Oct. 31, 2019.

The university received reports of discoloured water in the Marion McCain Arts and Social Sciences Building Thursday morning. The building was evacuated around 9:30 a.m.

Dalhousie University determined there was an issue with the building’s heating system, which led to two chemicals being introduced to the water supply for a short period of time.

The chemicals were identified as a descaling chemical containing citric acid, and a solution with propylene glycol, which is used to stop the pipes from freezing.

The university says the water systems in the McCain Building have been flushed and drained six times since Thursday morning. The samples were taken in five separate areas of the building covering three floors and all four corners of the building.

Samples taken on Friday, following initial flushing and draining, came back with no detectable levels of the chemicals, and are within Canadian drinking water standards.

The building remains closed Monday. It will reopen and classes will resume Tuesday morning.

Dalhousie says they will be replacing all the filters in the building’s water fountains as a precaution. The school warns that the water may be slightly discoloured due to sediment from the amount of flushing, but says it poses no risk.

While the chemicals are considered low toxicity, the university is encouraging anyone who may have consumed drinking water from the building between 8 a.m. and 9:30 a.m. last Thursday to seek medical attention as a precaution.