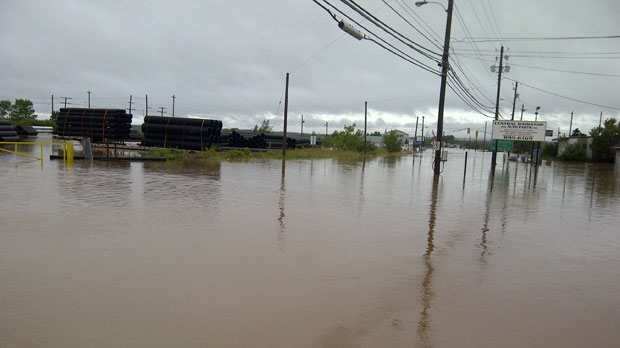 TRURO, N.S. -- Businesses in the Truro area that were flooded following a storm earlier this month want the Nova Scotia government to repair a damaged dike before river waters rise again.

Karl Costandi, the owner of Costandi Designs, an interior design store, said provincial and municipal governments must stop wrangling over who has financial responsibility for the embankment along the North River and find the quickest way to fix it.

"Immediately the dike needs to be rebuilt. Immediately," he said in an interview Thursday.

"Right now ... we're in big trouble if there's any substantial amount of rain."

He said eight businesses that employ about 50 people are threatened if the dike isn't repaired quickly, adding that more flooding may drive some employers out of the Truro area.

"I'm just praying they do something with the dike immediately. If not, I have no choice but to look at relocating," he said.

But Agriculture Minister John MacDonell, whose department is responsible for many dikes in the area, said that dike was built by a private citizen and it isn't the government's responsibility to fix it.

"This was not ours, so we worry about them, but this was fresh water and our (dikes) are to keep the ocean back and we really can't control what other people do," he said.

"I think somebody should look at this, whether it turns out to be my department or the Emergency Measures Organization or the municipality ... Somebody got permission to build a berm along the North River and it washed out and maybe they want to go back to that individual."

Alex MacKenzie, an employee of Hub Excavation and Trucking, said local businesses can't wait for layers of bureaucracies to discuss who will pay for the work.

"It could ruin us. We've already lost welders, plasma cutters and electrical tools. Trucks are flooded. It made a heck of a mess," he said.

"The province should step up and give their people some help."

Gary Robertson, manager of Fundy Grinding, a machinery and tools shop, said homeowners and employers along Highway 311 -- the area affected by this month's flooding -- think the province is best positioned to act.

"The Department of Transportation has the equipment, the excavators, bulldozers and trucks that can start to repair this," he said.

Bill Mills, the mayor of Truro, said a meeting of the regional Emergency Measures Organization was held Monday and municipal governments agreed to approach the province for help.

"We have a fair amount of money in a disaster relief fund," he said. "We might be wise to use some of that money for mitigation."

Mills said the municipal governments intend to follow up with Premier Darrell Dexter after he asked his officials to meet with municipal leaders and develop ways to reduce flooding damage.

Liberal agriculture critic Leo Glavine said the province needs to act to repair the damage as soon as possible, regardless of who owns any particular dike.

"That's clearly where government looking after the needs of all citizens needs to come in here and address this issue," he said.

Ross Landry, the minister responsible for the Emergency Management Office, said an overall assessment of the provincial dike system was underway.

Landry said staff from the department are scheduled to meet with municipal officials and engineering experts next Wednesday.

"After that data and information is calculated the premier and myself probably will have further discussions with the municipal leaders as to how we move forward," he said.

-- By Michael Tutton and Keith Doucette in Halifax