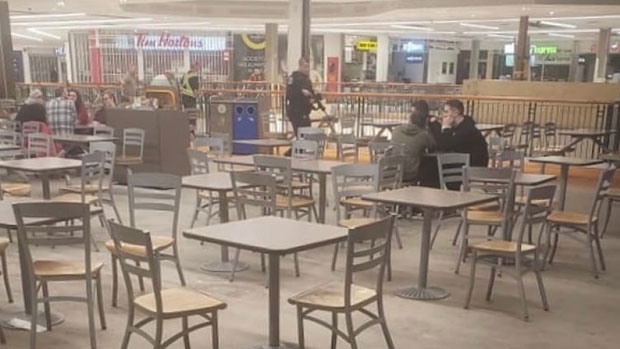 ST. JOHN'S, N.L. -- A young woman who snapped a photo of a police officer walking through a St. John's mall with a carbine firearm at the ready says she wishes officers could tell citizens more when highly armed situations arise in public venues.

The Royal Newfoundland Constabulary explained Sunday evening, almost two days after the incident, that they were responding to a report of a shooting at the Avalon mall that turned out to be a false report.

Twenty-three-year-old Amanda Evans said in an interview on Sunday she was coming off her shift and was sitting in the closed food court at Avalon Mall late Friday, taking shelter from a cool evening as she waited for a bus.

She says when she asked a Royal Newfoundland Constabulary officer carrying a rifle what was occurring and whether she should leave, she was told the situation appeared to be under control.

"I went up to the police officer with a gun and said, 'I know you're carrying something and the laser is on, but is it safe for me to stay here?"' she said.

"He said, 'It should be all fine for now. I think we have it all under control,"' Evans recalled.

Evans said the response left her uncertain of what to do and whether to remain in the area. She said she also searched in vain for a news release or public information afterwards to explain what had occurred.

Speculation on what had happened piled up in her Facebook page for a day, as the public awaited an official comment on the incident.

Const. Colin Shaw, a spokesman for the Royal Newfoundland Constabulary, said in an interview Sunday evening that carbines have become part of police responses to shooting calls since officers who weren't equipped with the long guns were killed in Mayerthorpe, Alta., and in Moncton, N.B., incidents.

The RCMP was convicted on Labour Code charges related to the 2014 shooting in Moncton that left three officers dead and two injured, due to its failure to provide its members with the necessary equipment to deal with an active shooter event.

The judge in the Moncton case said high-powered carbine rifles could have made a difference for the officers targeted by the gunman.

Then-commissioner Bob Paulson testified during the trial that RCMP management had concerns over the potential militarization of the force. He told the court he worried that the carbines could "distance the public from the police."

Shaw said in the St. John's incident, police responded appropriately by having the guns on display when they arrived at 10 p.m.

"We have to respond to each of those calls as though true, until it's proven false," he said.

"When you have a report of anyone with a firearm in a public place where there's potential for multiple casualties. ... officers respond with carbines."

Following the event, police offered limited information to media, other than to state the public was not at risk. Shaw said that a public explanation could have been produced more quickly.

Evans says she posted a fuzzy photograph of the officer with the carbine on her social media, adding she did so in an effort to draw out information on the incident.

Shaw said one option would be for an officer to refer the public to a supervisor when they ask what's occurring, but sometimes they might not be able to take the time and answer a series of questions.

"It's tough when you're in the moment to have the appropriate response to those kinds of questions that are coming at you," he said.

Brendan Rozier, a law student in Winnipeg who has researched police militarization, said the visibility of weapons is an increasing reality in Canadian policing.

"Both the public and the police want an effective police service, though they may disagree about what that looks like," he said in an email.

"To what extent should the police be expected to inform the public of ongoing situations, or to limit the use of certain equipment? Those are questions with answers that may vary from one community to another."