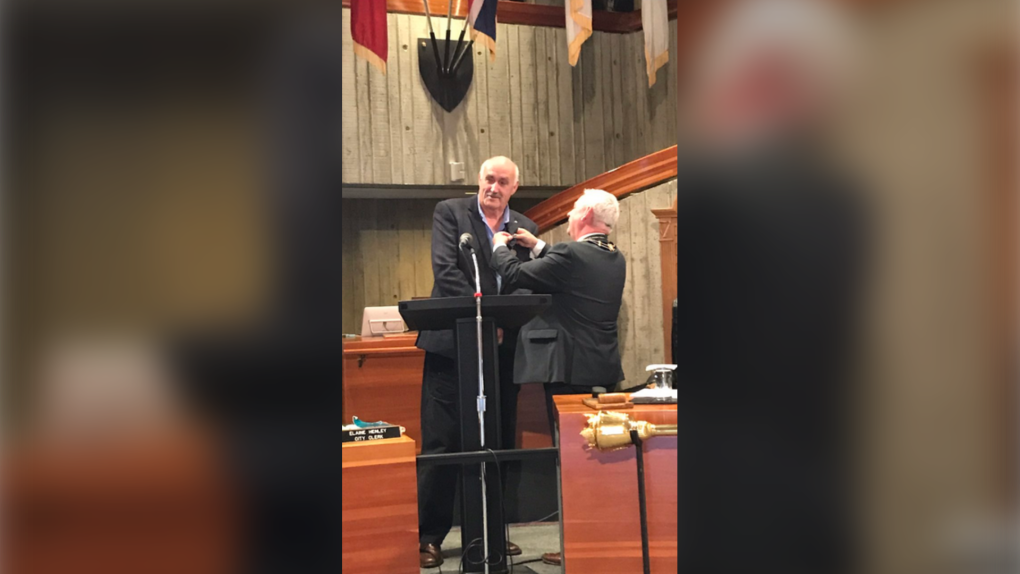 Mike Stapleton was awarded a medal for bravery from the Royal Canadian Humane Association at St. John's City Hall on Oct. 7. (Deanne Stapleton)

Mike Stapleton was awarded a medal for bravery from the Royal Canadian Humane Association at St. John's City Hall on Oct. 7.

Stapleton recalled the quiet early morning in May, at approximately 2:15 a.m., when he came across the damaged vehicle on a St. John's street.

"It was a weird, moon-ish night. There wasn't a sound," he said in a phone interview. "It's like I was meant to be there."

At first, he thought the car had been abandoned, but he soon realized four young people were inside, bloodied and badly hurt. Some were unconscious.

After calling emergency services, he worked quickly to carry each person to safety.

"The headlights were on, there was smoke coming from the car, so I said, 'I'd better go into action,"' he said.

All four people survived, but the rescue was no easy feat. Stapleton had to carefully lift one young woman, her leg "snapped" in the accident, from a back seat.

Another female passenger in the front seat was trapped with the door jammed. Stapleton said he struggled with the door and tried to break the window before praying for help.

"I was desperate then, right," Stapleton said. "Soon as I said that, I grabbed ahold of the door and ripped the door open. It came open once I asked the big guy."

A few seconds after he pulled the last person from the driver's seat, he saw the car go up in flames.

"Then it got real," he recalled.

"When the first police car pulled up in front of everything, boom. (The car) blew up over the bridge. They were lucky kids."

Since the rescue, Stapleton has been recognized as a hero by his coworkers, community members and politicians both provincial and local.

He said he's been humbled by all the recognition. The four survivors and their families have been in touch, sending cards and thanking him for saving their lives in the close call.

With five children and 10 grandchildren of his own, Stapleton said he hopes someone would do the same for his family if they were caught in a similar situation.

"I never thought of it. I just got them out."

This report by The Canadian Press was first published Oct. 14, 2019.