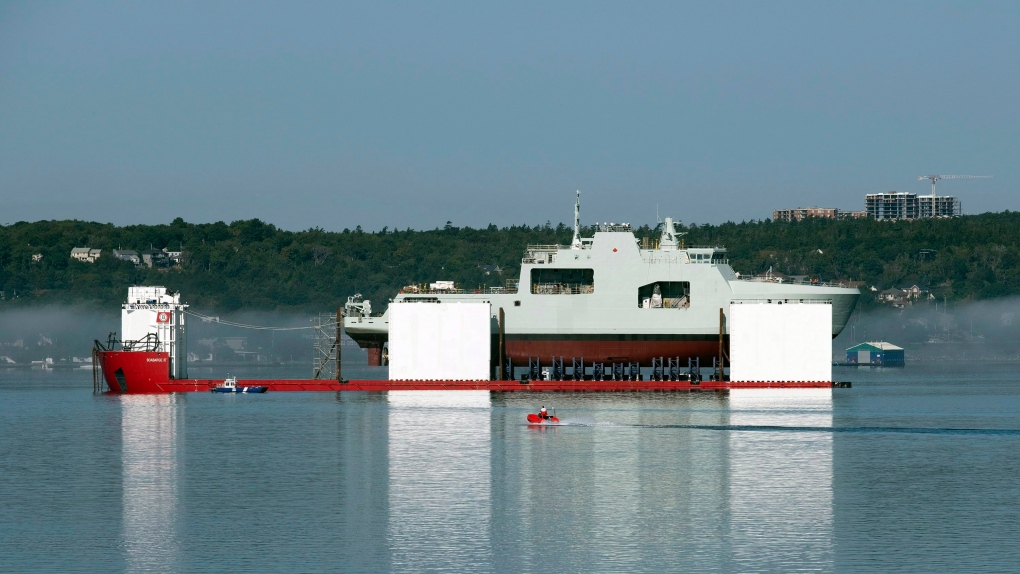 HALIFAX -- The ship that will become Canada's first Arctic and Offshore Patrol Vessel met water for the first time Saturday, the first of up to six vessels of its kind being built by Halifax's Irving Shipbuilding.

The future HMCS Harry DeWolf was towed to its launch site in the Bedford Basin on a submersible barge on Saturday, beginning an up to 24-hour long process where the barge is submerged and the vessel is taken back to the shipyard, where work will continue ahead of its delivery to the Royal Canadian Navy in summer 2019.

Even though it's been launched, the ship has yet to be officially named in a naming ceremony -- technically, its name is still "Irving Hull 103" -- and staff still need to work to prepare the ship for upcoming trials.

Ken Hansen, a retired Navy commander and defence analyst, said the future HMCS Harry DeWolf will need to go through rigorous testing before the country can use it.

"The ship will be tested by Irving's people to make sure everything works according to the specifications in the contract ... then the Navy will work together with the shipyard, and once the Navy has accepted the ship, they'll sign it off, and it will officially become HMCS," said Hansen.

The ship, which will be named after former Vice-Admiral Harry George DeWolf, is the first of at least five Arctic and Offshore Patrol Vessels tasked with patrolling Canadian waters, including the Arctic. The Navy says there is "an option for a sixth."

Assembly is also underway at the Halifax shipyard for the future HMCS Margaret Brooke and Max Bernays.

Hansen said these ships -- outfitted with a flight deck, rescue boats, and a remote-controlled 25-mm gun -- could aid in disaster or humanitarian response missions.

"When something like a humanitarian assistance mission comes along, it will probably be these ships that go, rather than the frigates or destroyers."

Irving will also build 15 vessels under the Canadian Surface Combatant project over the next 25 years.

Colin Darlington, a former Navy commander and the vice-president of the Royal United Services Institute of Nova Scotia, said the HMCS Harry DeWolf launch is significant because not only will it be the country's first Arctic and Offshore Patrol Vessel, it will also be the first large ship the Canadian Navy will receive in 20 years.

"It's a recapitalization in the Navy," he said, noting the Asterix, launched in 2010, is owned by the Federal Fleet Services.

"To go 20 years without a new ship has adverse effects: whether it be training or operations, you're working with older and older equipment."

While some Navy ships already venture up north, Darlington said these will be the first patrol ships specifically built to handle severe northern climates.

In a May 2017 report, however, the Senate's Committee on National Security and Defence outlined concerns they had over the $3.5 billion Arctic and Offshore Patrol Ships project.

"These arctic patrol vessels will be unable to break ice that is more than a metre thick, and will only be able to operate in the arctic between June and October, still requiring a coast guard icebreaker as escort; they are slower than a B.C. Ferry at 17 knots, and will lack significant force projection in the form of weapons system," read the report.

"These limitations are troubling and raise the question of whether the taxpayers are receiving value for the monies spent."

But Darlington said the one-metre icebreaking capabilities will enable the ship to get to most places where it will be needed, noting that the ship is not a designated icebreaker.

He added that the ship's gun is standard for a patrol vessel, and if it finds itself in an unlikely situation where more firepower is needed, that would be provided by strike aircraft or major warships.

"The ship will be able to function all of where she'll need to function," he said. "You don't need to have a major combatant capability in every ship; you can't afford that. The Harry DeWolf has to be looked upon as part of an overall Navy capability."

According to Irving, the vessel is the largest Royal Canadian Navy ship built in Canada in 50 years, at 103 metres long and 6,615 tonnes.