SAINT JOHN, N.B. -- The tragic tale of the Titanic still captures attention more than 100 years after the passenger liner sank in the North Atlantic 600 km southeast of Cape Race, N.L.

Now, Canadian researchers are investigating the authenticity of a message in a bottle allegedly thrown from the liner before it went down.

Four years ago, a family walking along the shores of the Hopewell Rocks near Hopewell Cape, N.B., stumbled upon a maritime mystery.

It was a still-sealed bottle with a message inside -- a letter dated April 13, 1912 -- and signed by Mathilde Lefebvre.

That's the name of a passenger on the Titanic, who perished in the tragedy.

"She's a famous passenger," said Manon Savard, a professor of archeology and geography at the University of Quebec at Rimouski. "She was featured in an exhibition in France in Cherbourg Museum, there was an exhibition on the children of the titanic and she was mentioned there."

Academics with the university in Rimouski, Que., are now working to authenticate the message.

So far, radiocarbon dating has been done on both the cork and the paper that was wrapped around it.

"We received radiocarbon dates that are consistent that means that they are older, if they were recent dates we could rule it out as a hoax, but the dates are consistent."

Testing on the bottle itself has also been found to be consistent with the date written on the letter.

But there are questions and doubts -- including the handwriting -- which is much different than what was taught to children that age in French schools at the time. 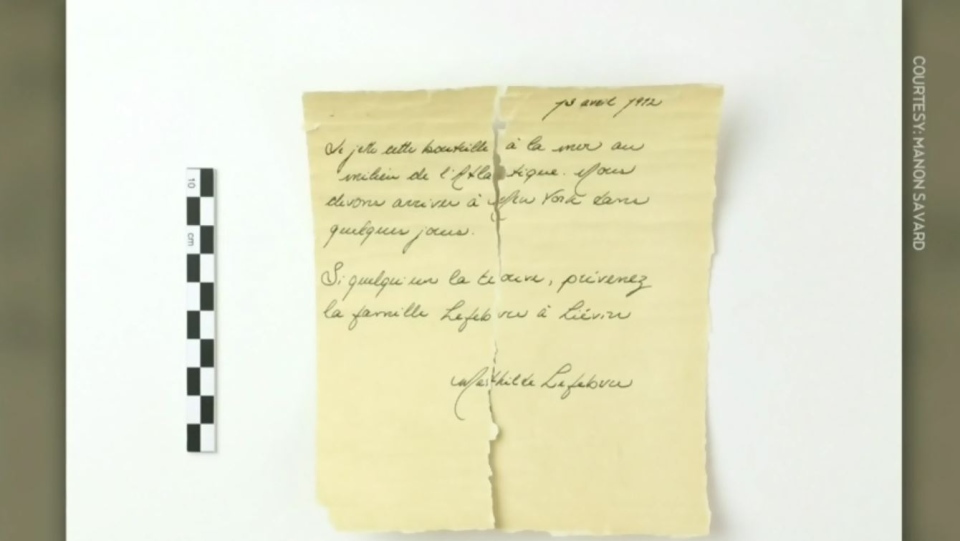 Researchers are also looking into whether a bottle that was tossed off the ship could have eventually made its way to New Brunswick.

That probability has been determined to be very low, but not impossible.

Professor Nicolas Beaudry, who is also from the University of Quebec at Rimouski, says throwing bottles into the sea was very common in the late 19th century -- as were newspapers publishing purported "last words" from passengers.

"Newspapers regularly published letters about messages from the sea found on beaches or found offshore and they would publish them about news even when they had serious doubts about their authenticity," Beaudry says.

So, if this is a hoax, it's possible that it's one that's many years old.

As researchers continue to try to solve this mystery --- one thing is certain: that the cultural curiosity around the Titanic continues – even more than 100 years later.