RESERVE MINES, N.S. -- It started with a photo and created a lasting friendship between two fire departments.

A Cape Breton fire station threw its support behind a department from the mainland -- giving up their own chance of winning a cash prize in the process.

Bradley O'Neil looks through his old firefighting gear, which dates back to 2007.

"I'm not exactly sure how out of date my old gear is, but it is expired and out of date," O'Neil said.

The 23-year-old is a member of the Smith's Cove Volunteer Fire Department, but Tuesday he was in Cape Breton, and will soon have brand new gear, thanks to his firefighting brothers in Reserve Mines, N.S.

"When that pager goes off, we are putting that turnout gear on and risking our lives to go and save people we don't even know," said Reserve Mines Fire Chief Jeff Aucoin. "We would at least like to see people wearing the proper equipment."

Aucoin met Josh Snyder, the chief of the Smith's Cove Fire Department, on Tuesday. It's a meeting that's been marked on both their calendars for some time now.

"Most of us are a small department, fighting in a big department world, and we all need help," Snyder said.

And that's exactly what Snyder and his members got.

It all started with a fire photo contest, offering a cash prize of $5,000.

In the end, it came down to Reserve Mines versus Smith's Cove and a stunning shot taken by photographer Sean Francis. 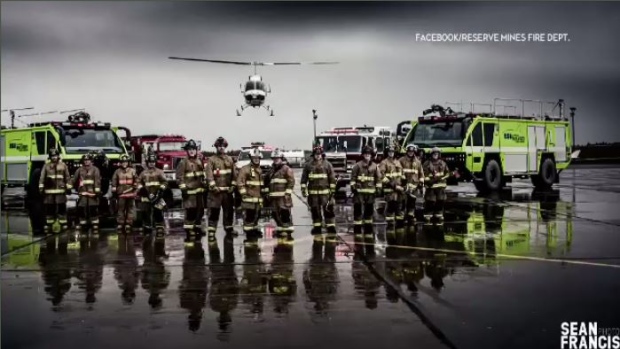 "We were blown away, and within 24 hours, the lead that we had was gone," Snyder said.

And so was the hope of getting new gear Snyder's department desperately needed -- but the story doesn't end there.

Aucoin and the firefighters in Reserve Mines found out how bad the need was and dropped out of the contest, putting their support behind Smith's Cove.

"We can be a neighbouring department down the road or another department in another province," Aucoin said. "We all try to stick together and support each other.

Said Snyder: "As soon as I went and told the members, some cheered, some cried, some were like this means we're going to get brand new bunker gear."

Tuesday, Snyder presented Aucoin with a thank you card signed by all of his members, along with scallops from the mainland.

The two fire departments were planning a barbecue and a get-together at the fire hall Tuesday evening -- but not before one last gift was was handed out.

"We wanted to come up with a real special way to thank Reserve Mines Fire Department, so we found an old helmet and mounted it and then put a plaque on it to show the everlasting strong brotherhood that this fire department has given us," said Snyder.

With that plaque, they made Reserve Mines honorary members of Smith's Cove -- creating a bond for life.