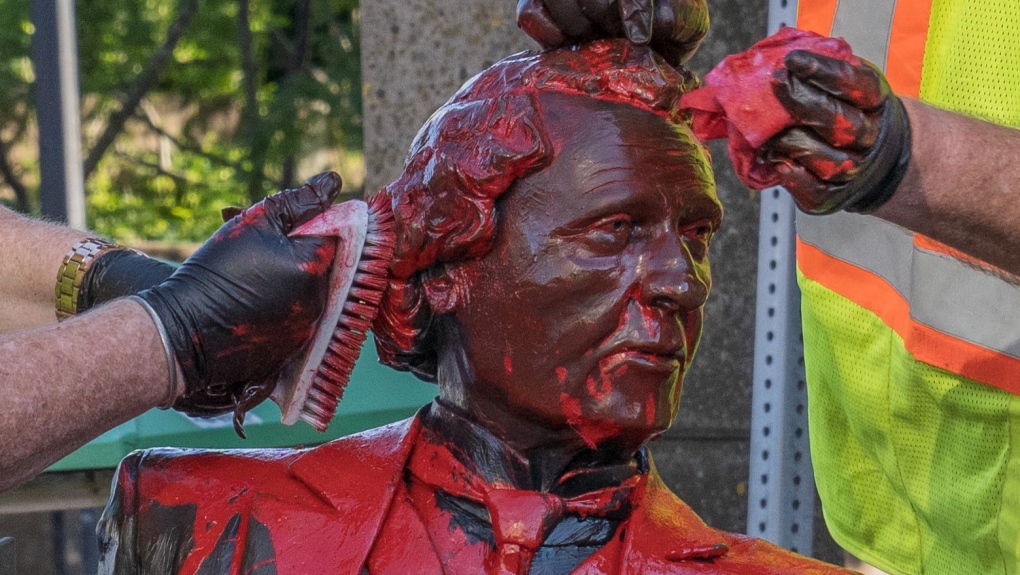 Workers remove red paint from a Sir John A. Macdonald statue in Charlottetown on Friday June 19, 2020. (THE CANADIAN PRESS/John Morris)

FREDERICTON -- Charlottetown city council says more discussion is needed before it decides what to do with a statue of Canada's first prime minister.

Council voted 7-2 Monday evening to send the issue back to committee for further discussion.

The artwork, which features Sir John A. Macdonald sitting on a bench in Prince Edward Island's capital, has been vandalized three times in the past year.

Indigenous groups on the Island have recommended a number of changes including adding a sculpture of an Indigenous elder or child next to Macdonald to create the image the two are in conversation. They have also requested the city install a new plaque that describes more of Macdonald's story, including his role in the creation of the residential school system.

Mayor Phillip Brown said council has had difficulty getting members of the academic community involved in helping to write the content for the plaque. "It's been hard to get anything to present to council," Brown said in an interview.

The Epekwitk Assembly of Councils wrote to the city in January, saying that adding another statue, such as an Indigenous child or elder, would "visibly represent (Macdonald's) impact on Canada's Indigenous peoples."

"We feel this matter has dragged on for too long and that simply rewriting the plaque is simply not acceptable and that other issues involving the statue, as noted, need to be addressed," the assembly said.

Artist Mike Halterman, who created the art piece in 2008, says he has no problem adding to the statue. "I'm an artist man, not a politician," Halterman said Monday from his studio in Cripple Creek, Colo.

He said he doesn't understand why people want to vandalize statues and try to destroy history.

Halterman, however, said he likes the idea of adding an Indigenous elder or child to the art installation. "It might work. It would even it out," he said.

Brown says reconciliation is important and he hopes any changes could be made as soon as possible.

This report by The Canadian Press was first published April 26, 2021.