Charlottetown votes to add Indigenous figure next to Sir John A. Macdonald statue 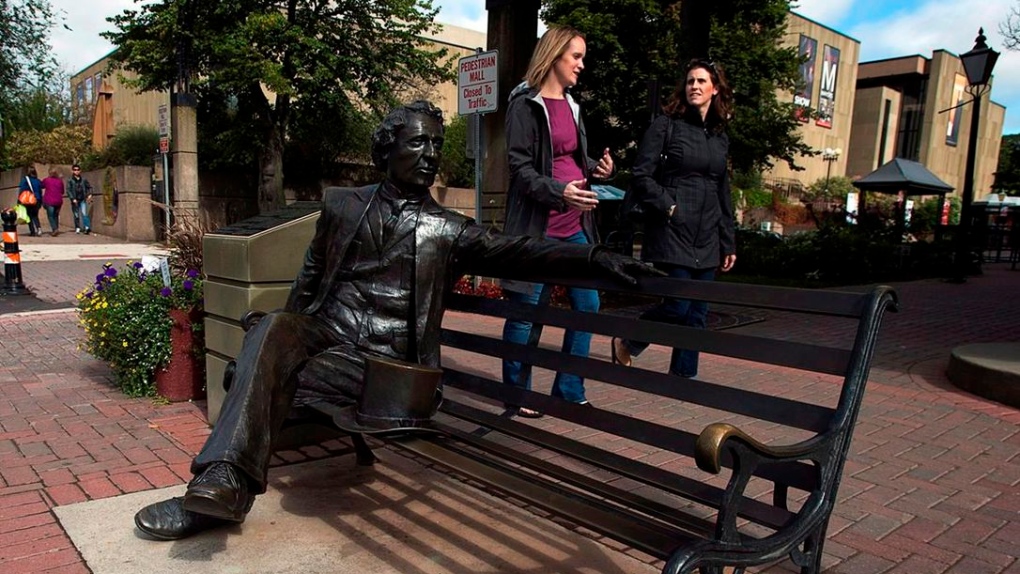 Charlottetown city council will install a statue of an Indigenous elder or child next to a downtown statue of Sir John A. Macdonald to create the image the two are in conversation. (Photo: THE CANADIAN PRESS)

FREDERICTON, N.B. -- The City of Charlottetown will add a representation of an Indigenous elder or child next to its downtown statue of Sir John A. Macdonald to serve as a reminder of the darker side of the former prime minister's legacy.

The change is one of several recommendations from Indigenous groups on Prince Edward Island that were adopted by city council Monday night in an 8-1 vote.

The statue in the P.E.I. capital of Canada's first prime minister, sitting on a bench with his arm outstretched and his top hat beside him, has been vandalized three times in the past year. The damage is part of a national trend, which saw one statue toppled in Montreal last August, as greater attention is focused on Macdonald's role as an architect of the country's residential school system, where thousands of children suffered abuse, or even death.

The Epekwitk Assembly of Councils, which represents the Abegweit First Nation and Lennox Island First Nation on P.E.I., wrote to the city in January recommending several changes to the statue, including a new plaque providing a fuller account of Macdonald's story. The group sought to have the empty space on the bench blocked off to remove the possibility of photo opportunities next to the statue.

The assembly also called for "the addition of another figure, such as an Indigenous child or elder, to offset the existing one and therefore visibly represent his impact on Canada's Indigenous peoples."

In a statement Tuesday, the assembly said it hopes to see the changes implemented quickly. "Certain recommendations such as filling in or sealing off the empty space on the bench next to the statue to discourage selfies and photo ops should be dealt with immediately, with the others implemented as quickly as possible," it said.

"The devastating impacts of the Indian Act, residential schools and the other laws and policies that Sir John A. Macdonald was responsible for must also be told," the statement added. "We believe it should be less about taking the statue down and more about telling our real history, our true shared history and, most importantly, all of our collective energy should be aimed at solving the very devastating injustices facing the Mi'kmaq in P.E.I. and Indigenous people across this country."

Coun. Julie McCabe, who chairs the city's tourism and economic development committee, said the changes approved by council are significant. "It's important to be able to come to a compromise and find balance in the reconciliation process and to work collaboratively with the Indigenous groups," she said in an interview Tuesday.

She said consultation will have to continue with the artist and the Indigenous groups to come up with a design. McCabe said only then will they be able to discuss a budget for the changes. The original art piece cost about $75,000.

Artist Mike Halterman, who created the work in 2008, told The Canadian Press last month he has no problem adding to the statue. "I'm an artist, man, not a politician," Halterman said from his studio in Cripple Creek, Colo.

He said he likes the idea of an Indigenous elder or child joining Macdonald. "It might work. It would even it out," he said.

McCabe said the goal is to make the changes by this fall, but she said the consultation process could delay that.

"It has taken almost nine months to get to this point today, and we have to be realistic in working with the original artist and with Indigenous groups. I do believe this is going to be a process," she said.