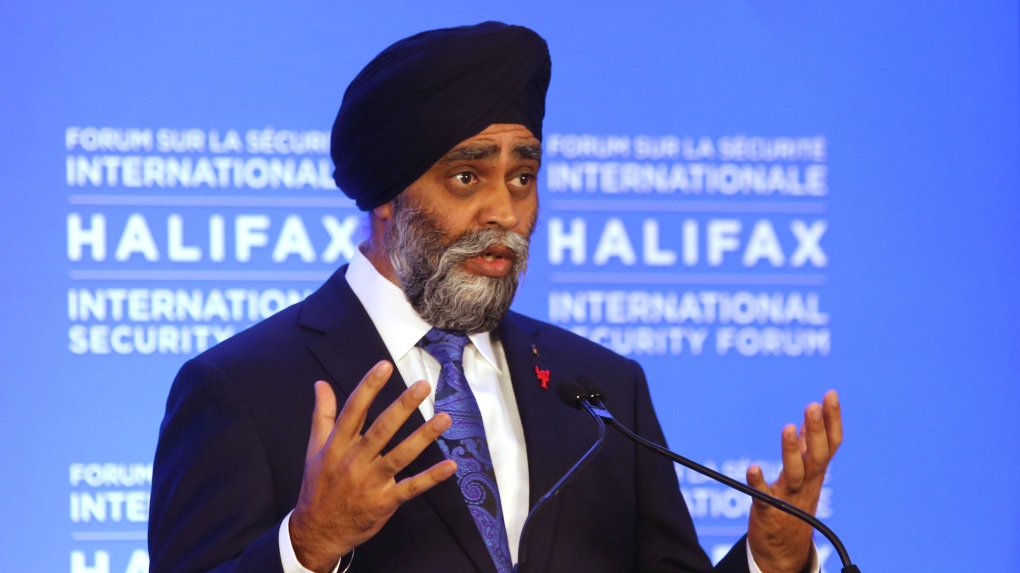 Harjit Singh Sajjan, Minister of National Defence, speaks at the opening news briefing before the start of the Halifax International Security Forum in Halifax on Friday November 22, 2019. THE CANADIAN PRESS/Tim Krochak

HALIFAX -- Canada's defence minister says he doesn't see China as an adversary, as a security conference in Halifax this weekend prepares to focus heavily on the Asian superpower.

Harjit Sajjan said while there are significant challenges in Canada's relationship with China -- including the detention by the Chinese of two Canadians -- there is co-operation on "certain aspects of trade," and now is the time to try to work together to find solutions.

"We don't consider China as an adversary," Sajjan told reporters at the Halifax International Security Forum on Friday.

"Some of the things that China from a security perspective have been doing is concerning, and we need to be mindful of that. But it's only through the appropriate discussions that we are able to get back into a rules-based order."

Several of the sessions at the Halifax forum will deal with the country many geopolitical experts see as an emerging threat.

China-Canada relations have largely remained tense since the detention of Michael Kovrig and Michael Spavor on espionage allegations last December, shortly after Huawei senior executive Meng Wanzhou was arrested in Vancouver on an extradition request from the United States.

Many China observers believe relations will remain in limbo until Meng's case is resolved.

Forum president Peter Van Praagh wasn't as careful as Sajjan in his assessment, saying China can be characterized in a variety of ways including as a strategic competitor and adversary.

"I think it's clear that China and Canada do not share the same interests," Van Praagh said. "There is some intermingling on some issues, but China has a very different view of the world than Canada's view of the world."

Van Praagh said Canada and its democratic allies in Europe and Asia need to recognize that fact in order to be properly prepared to deal with it.

He noted that trade is often top of the agenda when it comes to China because of the jobs it means for Canada, the U.S. and their allies.

"And so, what are we willing to surrender in terms of our own values in co-operation with China and where is that line drawn?"

Tensions are also high over China's handling of pro-democracy protests in Hong Kong. Emily Lau, chair of the Foreign Affairs Committee of the Democratic Party of Hong Kong, will be one of the participants in the Halifax forum.

Van Praagh later announced the forum would be conducting a year-long initiative focused on China. He said the forum would consult with subject experts to produce a strategy paper that would be released at next year's gathering, just two weeks after the next U.S. presidential election.

"It is time for a comprehensive China strategy for the United States, Canada and their allies -- one that makes the world safe for democracy," he said in a statement.

Meanwhile, the forum was also looking to deal with questions raised about a plenary session to be held Sunday on women's contributions to security solutions.

As things stood early Friday, the participants were all men: Admiral Rob Bauer, chief of defence of the Netherlands Armed Forces; Atul Khare, under-secretary general of operational support at the United Nations; Gen. Stephen Wilson, vice-chief of staff for the United States Air Force; and moderator Steve Clemons, editor-at-large for The Hill.

"This panel was not an accident," said Paz Magat, director of the forum's Peace With Women Fellowship.

"We are hoping to have a meaningful conversation about what it's going to take to truly elevate the role of women. We still need the people in positions of power to be able to let us do that an we are hoping that this panel will address some of the barriers and challenges that still impede women."

When asked whether any women would be added, Magat would only say the panel is "continuing to evolve."

In a tweet issued later, Clemons said that the panel should include women's voices.

"This needs to be changed," the panel's moderator tweeted.

This report by The Canadian Press was first published Nov. 22, 2019.