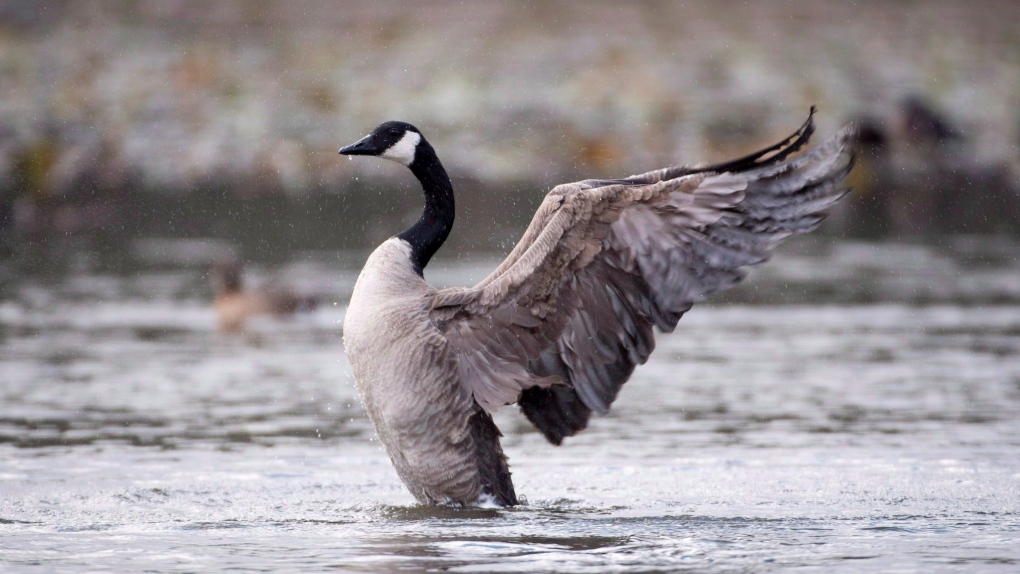 A Canada goose shakes his feathers as he swims in Burnaby Lake in Burnaby, B.C. Monday, Nov. 5, 2018. (THE CANADIAN PRESS /Jonathan Hayward)

MONCTON, N.B. -- Moncton, N.B., has a goose poop problem, and the city's director of parks says he may need strobe lights to solve it.

Dan Hicks says the Canada goose population around Jones Lake and nearby Centennial Park increases every summer, and the birds leave behind a treacherous mess on the surrounding walking trails and lawns.

"(When) you start to measure the problem in how many droppings per square foot, you know you have a problem," Hicks said in an interview Thursday. "We were in five to seven (per square foot) in some areas."

He's been looking at solutions that will let geese and humans peacefully coexist. In particular, he's interested in specialized floating strobe lights made by a company called Away With Geese. The low-lying LED lights would float in the lake, blinking through the night and hopefully annoying the geese enough to keep them away. Hicks said he'd like to try a sample set in a popular nesting area to see how it goes.

The impact on trail walkers would be minimal. And he's not concerned the strobe lights will replace the goose problem with a nighttime dance party problem. "The light itself is fairly low to the ground and fairly low level," he said.

He's also looking at putting up fencing around the lake to discourage the geese from nesting there. An ideal nest provides shelter, camouflage and a direct path to water for the goslings, he said. A fence could block that path and encourage expectant geese mothers to settle somewhere else.

He's asking the City of Moncton to allocate $15,000 in its upcoming 2021 municipal budget for what he calls a "goose management strategy," which could incorporate the lights and fences. He suspects there will be public support for the expense.

"We've had some pretty frustrated residents express their concerns in various ways, suggesting a myriad of different tactics, some of which we could try, some of which . . . probably not," he said, laughing, noting that he was relieved when Thanksgiving passed without any noticeable drop in the goose population.

The strobe lights would not be Moncton's first goose-control scheme. Hicks grabbed attention in 2013 when he tried to use a small remote-controlled seaplane called the Goosinator to control the flocks. He and his team flew the plane out onto the surface of the lake to break up goose gatherings.

The Goosinator did not solve their problem -- the geese would scatter and then come right back -- but it was fun to fly, Hicks said.

The Canada goose problem is relatively new for Moncton. "We didn't have a resident population of geese back in the late 80s, early 90s," Hicks said. Under then-premier Frank McKenna, the province accepted a shipment of geese from Toronto, which was having issues similar to Moncton's current ones. McKenna's idea was to start a goose-hunting business in New Brunswick, Hicks said.

That didn't quite work out, but Hicks said he's not mad at McKenna for possibly contributing to his present problems. "He was an excellent premier," he said. "I guess you live and learn, and we'll continue to move forward."