Clinic closure in N.B. an unlikely catalyst for change on abortion 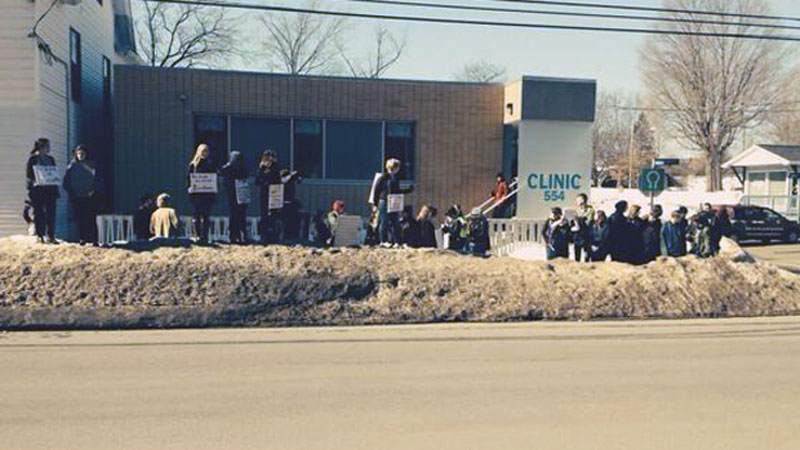 Pro-abortion supporters gather outside the Morgentaler Clinic in Fredericton after it was announced the facility would be closing. (CTV Atlantic)

For abortion rights activists in New Brunswick, the announcement in April that the Morgentaler Clinic in Fredericton would soon shut down marked a low ebb for the movement.

However, it actually proved to be an unlikely catalyst for change.

The closure, caused by the province's steadfast opposition to paying for abortions in private clinics, suddenly focused national attention on New Brunswick's uniquely restrictive approach to offering the medical procedure.

In the weeks that followed, younger abortion rights activists were galvanized into action, turning to social media to rally support and heading to the streets to organize protest marches.

"It made national headlines ... and the fundraising just shot up like crazy because suddenly, people knew about it," says Joyce Arthur, executive director of the Abortion Rights Coalition of Canada.

"I think it really shocked the government."

Under Regulation 84-20 of the province's Medical Services Payment Act, women seeking publicly funded abortions have to get written permission from two doctors to certify the procedure as medically necessary. As well, abortions can only be performed in one of two hospitals by obstetricians and gynecologists.

Those requirements will be eliminated as of Jan. 1.

While access to abortion is hardly uniform across Canada, those restrictions have not applied for years in other provinces. P.E.I. is the only province that doesn't offer abortion services, preferring instead to pay to have the procedure done in other provinces.

Successive governments in New Brunswick -- both Liberal and Progressive Conservative -- had long stood firm in their resolve that their rules were in line with a landmark Supreme Court of Canada ruling that decriminalized abortion in 1988, though critics said otherwise.

Arthur says that even among abortion rights activists across Canada, New Brunswick's approach to abortion had attracted little scrutiny in recent years.

"It was really hard to get people to understand how serious a problem this was," she says.

Joanne Wright, a professor of political science at the University of New Brunswick in Fredericton, says it's important to remember that New Brunswick wasn't the only province to restrict access to abortions after the Supreme Court decision.

But the restrictions in other provinces fell after a long series of court cases.

By contrast, New Brunswick lawmakers clung to the status quo, fighting in court against abortion rights crusader Dr. Henry Morgentaler even after his death in 2013.

"New Brunswick was absolutely resolute about defending its policy," says Joanna Erdman, an expert in health law at Dalhousie University's Schulich School of Law in Halifax. "The government was willing to challenge this to the wall."

While it's clear that religion played a role -- the province has a large Roman Catholic population -- Wright says there were other factors at work.

Until recently, the province's small population did not have a critical mass among reproductive rights advocates, she says.

"Being a smaller province that is sometimes characterized as being more small-c conservative, I think it makes it more challenging to get those critical voices heard," she says.

As well, she says the province suffers from what she calls "New Brunswick exceptionalism."

"There's a belief that we are just a little province and we can't expect the same rights and entitlements here," she says.

"We understand that we have to settle for less because we can't afford certain things. ... That leads to complacency. That leads to a sense that the government can make decision for us and not bother asking what we think."

As the issue gained traction through the summer, other abortion rights advocates came forward to remind Canadians about New Brunswick's low-key, hardline approach.

At one point, the president of the U.S.-based National Abortion Federation, Vicki Saporta, said New Brunswick's restrictions were tougher than those found in any U.S. state.

Unmoved, then-premier David Alward said the status quo was fine with him.

Liberal Leader Brian Gallant had been calling for a review of the regulation, but in July he promised that as premier he would move swiftly "to ensure we are respecting a woman's right to choose."

Gallant, whose Liberals were elected to govern on Sept. 22, stunned the province last month when he announced his cabinet was amending Regulation 84-20 so that women would no longer need the approval of two physicians to have abortions and the procedures would not have to be done by specialists.

"The (Morgentaler) clinic was essentially serving as a crutch for a system that was not respecting a women's right to choose," the premier told a news conference Nov. 26.

"Regardless of our personal views, we need to respect the reproductive rights of women that have been confirmed by the Supreme Court of Canada."

"Maybe they were being a bit timid, wanting to take just one step at a time," says Arthur. "They should be challenged on this."

"One province after the other has gone the way of abortion rights and has gotten into funding abortion on demand," he says.

"There's been a cultural shift in Canada and that shift has come to New Brunswick. ... To us, it seemed like there was a shame campaign going on, whereby the message was: 'What's wrong with New Brunswick? Why are we not falling into line with the rest of Canada?"'