People who live near New Brunswick’s Smithtown Covered Bridge say they heard ominous creaking in the lead up to several stories of scaffolding collapsing close to the wooden link.

It happened Thursday morning. A resident, who didn’t want to be named, was curious about the sound and began recording video of the already damaged scaffolding just before it fell into the Hammond River.

The New Brunswick Department of Transportation and Infrastructure (DTI) says the scaffolding at the Smithtown Covered Bridge in Hampton, N.B., collapsed due to the high water resulting from heavy rains overnight Wednesday into Thursday.

DTI says district staff confirm the bridge itself wasn't damaged. Video shows some boards were broken from the bridge when the scaffolding was being pushed by the river.

As for the 108-year-old covered bridge, the department says there is no damage to the structure after the collapse.

“The scaffold installer for the project was contacted early Thursday morning to assess the area and began removal of scaffolding, which will continue today and into next week,” said a spokesperson in a statement to CTV News.

“Some scaffolding may remain in the river; but will be removed once the water recedes.” 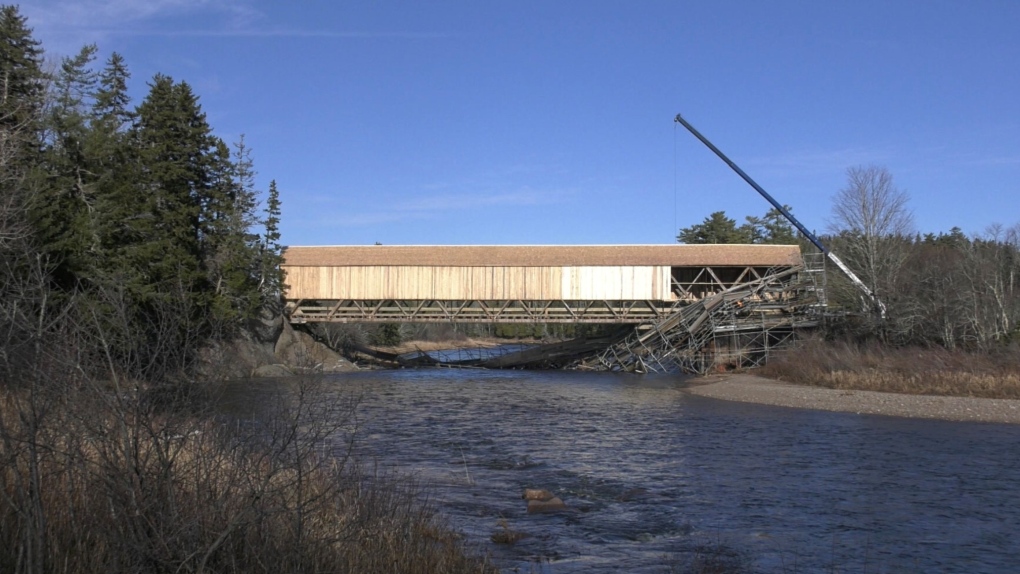 The historic Smithtown Covered Bridge is seen in Hampton, N.B., on Dec. 2, 2022, a day after after scaffolding collapsed next to the structure. (Nick Moore/CTV Atlantic)

The province says it’s looking at options other than scaffolding to complete the work being done to the bridge. It had hoped to have the work completed this week, but the province says the incident will likely push the project back by at least two weeks.

In the meantime, the Damascus Road approaches to the bridge remain open to traffic.

The Smithtown Covered Bridge was built in 1914.

BC Emergency Health Services saw a slight decline in 911 calls for overdose and drug toxicity last year, but some areas saw a dramatic increase, and the death rate doesn’t appear to be slowing down.