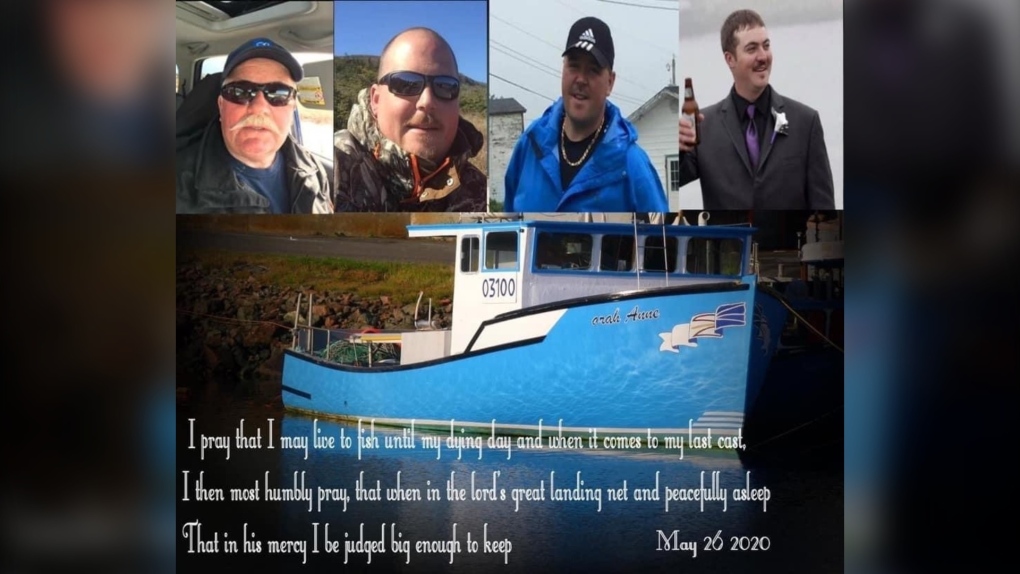 Ed Norman, left to right, Scott Norman, Jody Norman, Isaac Kettle, four fishermen from St. Lawrence, N.L., who went missing while fishing for crab on Monday as shown in this image provided by Melissa Mayo-Norman. The bodies of Ed, his son Scott and nephew Jody were recovered on Tuesday as the search for Kettle continued on Wednesday. (THE CANADIAN PRESS/HO-Melissa Mayo-Norman)

ST. LAWRENCE, N.L. -- Search and rescue operations to find a missing Newfoundland fisherman whose three crewmates perished at sea were to wind down at sunset Wednesday.

Mark Gould, regional supervisor for search and rescue at the Maritime rescue sub-centre in St. John's, said ships searched late into Tuesday night and were back at it Wednesday morning, aided by aircraft. The vessel Sarah Anne is believed to have sunk Monday.

"Nothing has been found at this point, and we're reaching the time where there's no chance of finding a survivor, even giving someone the best chance and best odds based on our models," Gould said late Wednesday.

"We've exhausted all of our leads. We've covered the search area multiple times."

After the search of Placentia Bay concludes, the case will be handed over to the RCMP as a missing persons investigation.

Three men from the same Newfoundland family with a long history of fishing died in the apparent sinking of the Sarah Anne, which was reported missing off the island's south coast Monday evening.

Residents of St. Lawrence, N.L., a town of about 1,200 and the Norman family's home community, were mourning the loss Wednesday as they rallied to continue the search for young father Isaac Kettle, who had been aboard the boat with the trio.

Eileen Norman of St. Lawrence told The Canadian Press that the body of her brother-in-law Ed Norman, 67, had been found Tuesday. The bodies of his son Scott Norman, in his mid-30s, and nephew Jody Norman, 42, were also recovered.

Kettle, a close family friend of the two younger men who is in his early 30s, remains missing.

"He never stopped, he was always at something," Norman said. "I'll miss him being around (for) companionship. And anything I wanted done, all I had to do was call him."

He praised Scott and Jody Norman as young men eager to help out with any fixes around the house. "They'd be right here in five minutes," he said.

Provincial Fisheries Minister Gerry Byrne said the tragedy is a reminder of the dangerous work people do on the water in Newfoundland and Labrador.

"Their work requires courage and resolve every time they leave the safety of the harbour and embark to make a difficult living from an unforgiving sea," Byrne said in a statement.

Dozens of community members from St. Lawrence and the Burin Peninsula took to their boats to join the search for the lost fishermen, according to Mayor Paul Pike and coast guard officials.

The Transportation Safety Board of Canada was gathering information on the accident Wednesday afternoon but had not dispatched investigators because the wreckage had not been located.

The four men left St. Lawrence before dawn on Monday aboard the 12-metre vessel to fish for crab, and the search began shortly after 8 p.m. when they did not return as scheduled.

Ed Norman was an experienced carpenter who had purchased the fishing vessel last year and fixed it up with the help of his nephew and sons, his brother said. The Sarah Anne was named for a family member's girlfriend who was killed in a traffic accident.

Eileen Norman recalled how the young woman's family attended the boat's maiden voyage when it was christened with champagne.

John Norman said he'll miss the sight of the Sarah Anne docked in the town.

"I'll miss looking down every day, and not seeing the boat, and (Ed) not giving me a call," he said.