Commercial helicopter came within four metres of ditching in the Atlantic: report 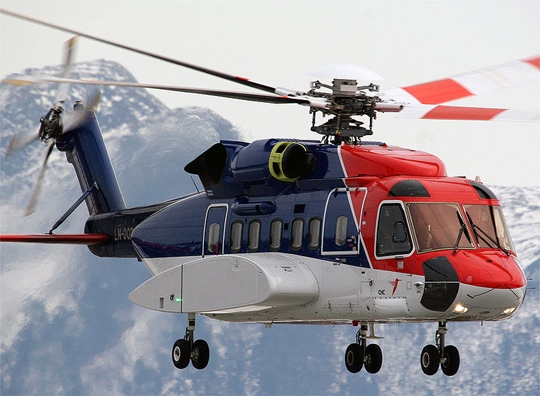 The Transportation Safety Board says a helicopter carrying 13 passengers and crew came within four metres of ditching in the Atlantic last July as it was trying to land on an offshore platform in foggy conditions.

HALIFAX -- A helicopter carrying 13 people came within four metres of ditching in the Atlantic as it was trying to land on an offshore platform in July 2019, the Transportation Safety Board said Tuesday.

The two pilots aboard the Sikorsky S-92A helicopter, operated by Canadian Helicopters Offshore, had attempted two approaches using instrument flight rules, but they couldn't land because of low clouds and poor visibility, according to a report by the federal agency.

The flight crew then spotted the platform, visible above a fog layer, and attempted a "non-standard visual approach," the report said.

Larry McWha, a retired navy helicopter pilot, said a non-standard approach indicates that the pilots flew toward the platform in a way that was not recommended.

"Once you descend into the fog, you lose your visual references," McWha said in an interview Tuesday. "There's no horizon anymore. And if they lost sight of the rig, they would have no reference there."

The offshore rig, known as the Thebaud Central Facility, is about 290 kilometres east of Halifax and was part of the Sable Offshore Energy Project. Production ceased in December 2018.

The independent agency said that as the helicopter approached the helideck in low-visibility conditions, the pilots inadvertently allowed the aircraft to descend too quickly.

"They were going at a relatively slow speed, which indicates to me a vertical descent, attempting to maintain visual contact with the rig as they descended into the fog layer," McWha said.

The board's investigation determined that during the final approach, the helicopter was flying at a low power setting, which the flight crew did not notice.

"The helicopter's low-energy state went undetected by the flight crew, who were focused on the helideck, which was sitting above the fog and in an area without a discernible horizon," the report said.

"The degraded visual environment made it difficult for the pilots to recognize the unstable approach."

The safety board said that during the rapid descent, the helicopter's engines were over-revved as the flight crew increased power to regain control just above the water.

"The story that is depicted here implies that they realized they were heading into a grave situation and tried to get every ounce of horsepower they could and they saved the situation," McWha, who has experience landing helicopters on ships and offshore rigs, said.

"They obviously lost contact with the horizon and the obstacle they were trying to land on and had to get out of there. It sounds like a close call for everybody."

There were no injuries and the aircraft safely returned to Halifax Stanfield International Airport that day. The report does not say anything about possible mechanical failure.

"The pilots were in control and they almost did an inadvertent ditching," McWha said.

As well, the report said the pilot who was flying the helicopter had engaged the so-called cyclic trim release, which reduced the effectiveness of the automatic flight control system and "contributed to control difficulties."

Neither the helicopter manufacturer's flight manual nor the operator's standard operating procedures warned of the potential hazards of using of the trim release in low-visibility conditions.

There was no indication how much damage was done to the "over-torqued" engines because the aircraft was removed from service after the incident on July 24, 2019.

This report by The Canadian Press was first published April 27, 2021.

A previous version of this story incorrectly stated the incident occured last July. In fact, it happened in July 2019.