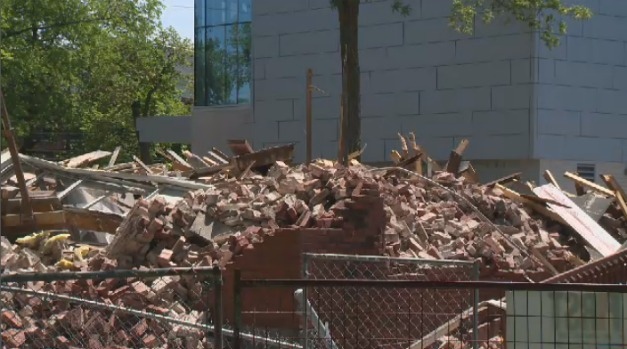 HALIFAX - In the early 1900s, the building at 980 Tower Road was known as the Halifax Infants Home. In the 1950s, it became Bethany Home, a place where unwed mothers could have their children.

“They might have committed suicide or infanticide or be on the street basically those were the options for young unmarried women of low-income,” says Stella Lord from the Canadian Federation of University Women. She was one of many who fought to save the building from demolition.

Linda Forbes from the Heritage Trust of Nova Scotia says she “felt sick” when she heard the building had been demolished.

“I think if we get rid of the physical reminders of our past whether it’s a happy past or a sad one, it’s more difficult to remember,” says Forbes.

In 1998, Saint Mary’s University bought the building. It was most recently used to teach English as a second language. For the university, it wasn’t financially feasible to keep the building up and running, according to Margaret Murphy, Associate VP External Affairs.

“It would cost $10 million just to stabilize it and renovate it because the walls and roof were unsound but it would take $13.4 million to repurpose it,” says Murphy.

While some community members are outraged at the university’s decision, others like Robert Carter, who lives in the neighbourhood, say it’s the right choice.

“The impression I got from them was there was shame to it,” says Carter. “I think it was great there was a facility at that time when women couldn’t have an abortion, but now it’s time to move on.”

The university says in the next few years a modern building will be erected on that plot of land and something will be placed near the area to recognize the home’s original purpose.