Complainant in tears after defence suggests sex-assault testimony was 'scripted' 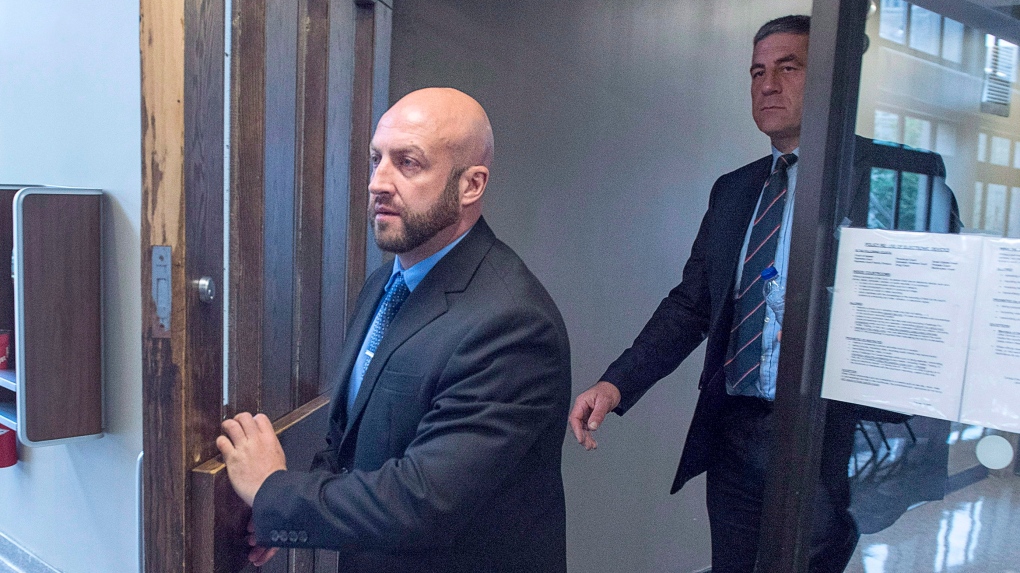 Darren Smalley, left, a British sailor charged with sexual assault causing bodily harm, heads from Supreme Court in Halifax on Tuesday, Sept. 4, 2018. Fellow sailor Simon Radford, also facing charges in the incident, was unable to attend court as he is in the hospital with an undisclosed ailment. THE CANADIAN PRESS/Andrew Vaughan

HALIFAX -- A young Halifax woman who was allegedly sexually assaulted by British sailors broke down in tears Friday after a defence lawyer suggested her testimony was "scripted."

Under cross examination by lawyer Ian Hutchison, the woman agreed she had gaps in her memory of what happened on the night of April 9, 2015, in the barracks of a Halifax-area military base, and that she cannot explain those gaps.

Hutchison suggested that her testimony was "rehearsed."

"It is not," she replied, breaking down on the stand.

Darren Smalley, 38, is charged with sexual assault causing bodily harm and participating in a sexual assault involving one or more people at 12 Wing Shearwater.

Hutchison asked how she prepared to testify at the trial and at an earlier preliminary inquiry.

She agreed she discussed possible "difficult" questions with her psychiatrist and psychologist, and Hutchison suggested she was using those professionals as a "sound board to determine how good your answers would be."

"I would disagree with that suggestion," she replied, now more calm and composed in her testimony.

The woman, whose identity is protected by a publication ban, agreed she highlighted portions of her police statement ahead of testifying at the preliminary inquiry, and Hutchison asked her why.

"As a student, you just highlight important passages," she said. "I don't know if I had a specific thought process in mind."

He also asked her questions about what a military police officer told her about the ongoing investigation.

She agreed the investigator called to inform her about the results of a toxicology report, and that a DNA test came back positive for Smalley's DNA.

On Thursday, the complainant testified she woke up face down and naked on a bed in the barracks with at least three men performing sex acts on her.

The woman said she went to sleep in a room with four beds next to a sailor and when she awoke, two men were performing sex acts on her from the front and one from behind.

The complainant said she went in and out of consciousness three times, and recognized Smalley's voice.

"I didn't know what the hell was going on ... I was in shock," she testified on Thursday.

The men were in the area to participate in a naval hockey tournament at the time of the alleged sexual assault.

On the night in question, the woman's friend had invited her on a double date with a British hockey player she had met on Tinder.

They watched a game at the Shearwater rink, and then went back to barracks afterwards.

She testified that she later got separated from her friend, and started feeling panicked.

The woman went back to the room they had been hanging out in previously that night, and found the room full of hockey players with a naked man face down on a bed.

She eventually found her friend, but then lost her again. At some point, it was decided they would stay the night. She didn't feel comfortable staying in the barracks, but did not want to abandon her friend.

She said she went to sleep in a bed next to a sailor, and when he awoke, at least three men were sexually assaulting her.

When asked if she had consented to sexual activity with Smalley or anyone else, she said: "There was none ... I would not have consented."

Simon Radford has been in hospital with a serious infection. The charges against him can be reinstituted within one year.