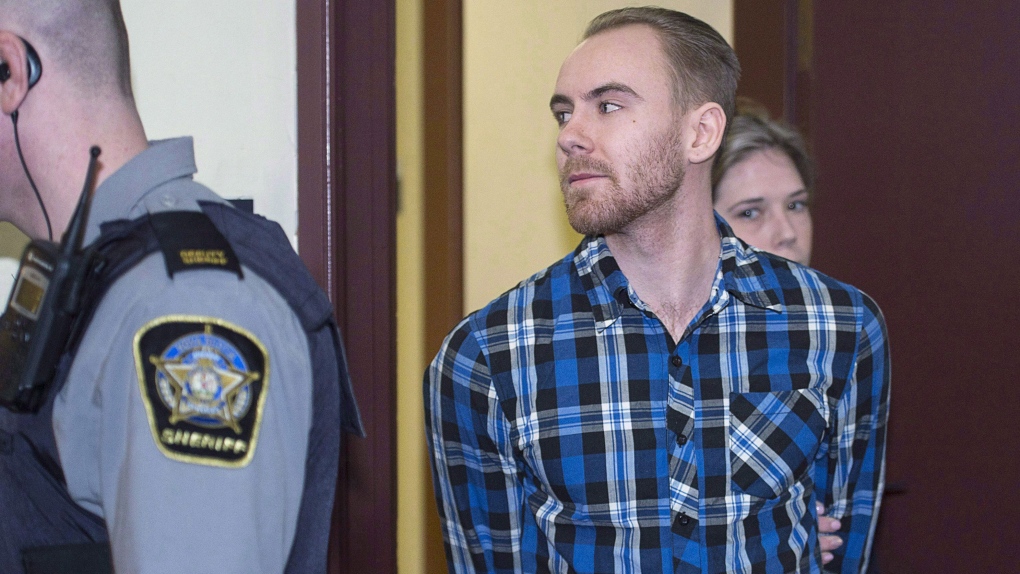 HALIFAX -- A former medical student serving a life sentence for murder has been granted a copy of his laptop hard drive, as he represents himself in a court bid to obtain the computer itself.

William Sandeson is in the process of appealing a first-degree murder conviction in the death of 22-year-old Taylor Samson during a drug deal, though Sandeson said Thursday he doesn't have a lawyer for that case yet.

Samson's body has never been found.

In written submissions requesting the return of his computer, which was seized by police during their investigation, Sandeson said it contained personal information of a sentimental value to him and his family. The specific items were not revealed.

Sandeson, who is in his mid-20s, appeared in Nova Scotia Supreme Court in Halifax via video conference on Thursday in an attempt to set a court date to get the computer back.

Sandeson, sitting in a white room with his arms crossed, could be seen behind a small round table with documents spread out before him.

During the brief court hearing, Justice Patrick Duncan read a portion of a letter from the Crown opposing the return of the computer while Sandeson's conviction is under appeal.

"Pending the disposition of any further proceedings in this matter, the Crown maintains its authorization to retain the computer," the letter said, alluding to Criminal Code provisions on the detention of property during appeals.

Duncan asked if Sandeson would like to reconsider his application given the Crown's position.

"I anticipated as much from the Crown," Sandeson replied, and confirmed he would like to proceed.

When asked if he had the chance to read over that section of the code, Sandeson said he looked at the section itself but didn't recall the specific subsection where the relevant information was mentioned.

On Thursday, Crown attorney Susan MacKay said while she opposed the return of the computer itself, the police were willing to give him a copy of the hard drive.

Duncan asked Sandeson if he wanted it.

"I would still like to proceed in trying to obtain the laptop in full," said Sandeson.

"It's not an 'or' proposition," the judge replied. "You can have the hard drive and you can continue your application anyway."

"Yes, absolutely, I would appreciate it very much if I could get the hard drive as well," said Sandeson.

MacKay said arrangements will be made to send a copy of the hard drive to Sandeson's father.

The judge was also unsure about if he had the jurisdiction to hear Sandeson's request, noting that matters like this usually go where the case is being heard: in this case, the province's Court of Appeal.

MacKay said she would consult with appeals lawyers, and the matter will be back before Duncan on August 9.

At the time of his arrest, Sandeson had completed one year of medical school in the Caribbean, was a track and field athlete, worked two jobs and had a girlfriend. He was due to start medical school at Dalhousie University within a week of the slaying of Samson, a physics student at Dalhousie.

Samson went to Sandeson's Halifax apartment on Aug. 15, 2015, to sell nine kilograms of marijuana as part of a prearranged deal. Sandeson, who did not have the $40,000 cash to pay for the drugs, shot him while he was sitting at a kitchen table.

Crown lawyers had argued Sandeson devised a scheme to kill Samson and steal the marijuana to pay off his debts.

Sandeson took a paralegal course while in prison so he could better understand his case.

In May, Sandeson was awarded nearly $700 after accusing a former roommate of stealing $2,500 worth of sneakers and homemade wine from their Halifax apartment.

Sandeson was living with Dylan Zinck-Selig when he was arrested.

Zinck-Selig had been given limited access to the apartment to retrieve essential items during the police forensic investigation. Zinck-Selig admitted to taking some sneakers and four bottles of wine, but not all the items claimed by Sandeson.

Sandeson also made headlines in January after he made a profile on Canadian Inmates Connects, a site that matches federal inmates to pen pals.