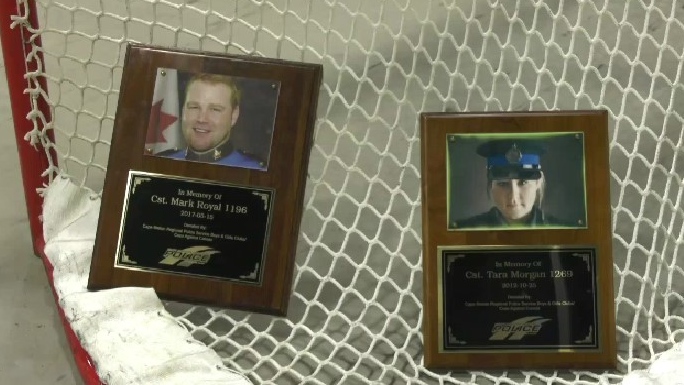 The Cops Against Cancer ball hockey tournament was created in 2018. The event typically raises more than $5,000 each year in the two officers' names.
GLACE BAY, N.S. -

“Her passion was policing. She was on the police force when she was 22. She got diagnosed with a brain tumour at 23 and she passed at 24,” said Morgan.

Although time has passed, Morgan says it feels like yesterday when they received the devastating news.

“People ask me and I tell them, it's like walking around with a load of bricks in your pocket. There's always weight on you. I go somewhere and see a police car and I think of her,” said Morgan.

Many people still think of her and colleague Mark Royal, who also passed away from cancer in 2017.

The following year, a Cops Against Cancer ball hockey tournament was created.

The event typically raises more than $5,000 each year in the two officers' names.

“Mark was a great guy. He was a great police officer. This is something he would be involved in today,” said Cape Breton Regional Police Const. Dwight Miller, an organizer of the ball tournament.

Nine teams made up of friends, family and community members will participate in the tournament, which is taking place at the Miners Forum in Glace Bay, N.S, on Saturday.

“I think it's important. We've all lost somebody to cancer outside of this. We all lost family members. I think it helps the organization for newer members coming on to not forget Mark and Tara,” said Miller.

Saturday's tournament is open to the public. There will be prizes and giveaways, with a chance to win a signed Vladimir Guerrero Jr. jersey from the Toronto Blue Jays baseball team.

Morgan says he's just happy the community is coming together to raise awareness and remember his daughter.

“I think she would be overwhelmed. She would like it, but at the same time, she was modest and didn't look for accolades, but she would be very happy,” he said.

The games begin at 9 a.m. Saturday.

Beto O'Rourke confronts Gov. Abbott on shooting: 'This is on you'

A news conference about the shooting at a Texas elementary school broke into shouting Wednesday as Democratic gunbernatotrial candidate Beto O'Rourke blamed Republican Gov. Greg Abbott for inaction ahead of the latest in a long string of mass shootings in the state.

Later tonight, the six candidates on the ballot to be the next leader of the Conservative Party of Canada will be debating each other in Laval, Que. CTV News will be live-streaming the debate with English translation and offering real-time updates and analysis, and you can follow along.

Governor: Texas gunman said he was going to shoot up school

The gunman who massacred 19 children and two teachers at an elementary school in Texas had warned in online messages minutes before the attack that he had shot his grandmother and was going to shoot up a school, the governor said Wednesday.