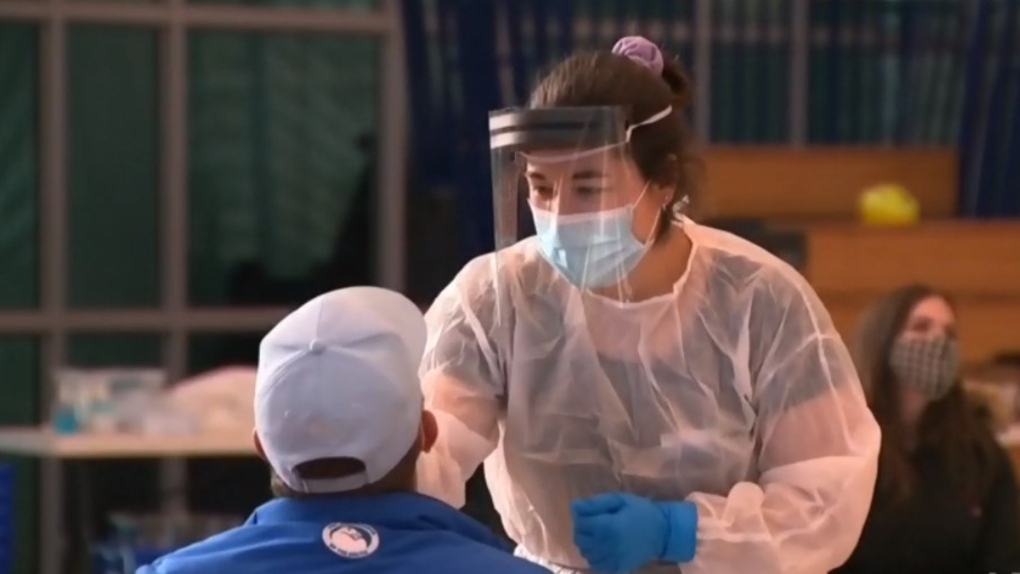 A COVID-19 test is administered at a testing site at the Canada Games Centre in Halifax on Dec. 3, 2020.

With 11 previously-identified cases now considered resolved, the number of active cases in the province has dropped from 55 to 50.

Three of the new cases are located in the province's Central Zone. One case is a close contact of a previously-reported case. One case is related to travel outside of Atlantic Canada. The person is self-isolating, as required. The third case is under investigation.

Two cases are in the Western Zone and are related to travel outside of Atlantic Canada. The people are self-isolating, as required.

One case is in the Northern Zone and is a close contact of a previously-reported case.

"While our case numbers are low, COVID-19 is still here and still moving into different areas of our province," said Premier Stephen McNeil in a news release. "That is why we must be careful about our own movement and our social contacts. I ask all Nova Scotians to keep following all the public health protocols to keep each other safe."

Nova Scotia’s daily new COVID-19 cases have been in the single digits since Dec. 5.

"For almost two weeks, our new case numbers have remained in the single digits. While the numbers are low, the virus still has the potential to spread," said Chief Medical Officer of Health Dr. Robert Strang. "We are approaching the holiday season, which is typically a time of year that brings people together. We need to remain vigilant and to continue to follow all the public health measures."

Chief Medical Officer of Health Dr. Robert Strang said Wednesday that the current restrictions in place in the Halifax area will be extended until Sunday night.

And on Monday, new restrictions meant to prevent any possible surge of COVID-19 will go into effect across the province until Jan. 10, he said.

Between Dec. 21 and Jan. 10, in-person dining at restaurants in the Halifax area will remain closed, while restaurants and licensed establishments in the rest of the province will have to stop service by 10 p.m. and close by 11 p.m., Strang said.

Indoor gatherings provincewide will be limited to 10 people, while social events such as festivals and cultural and sports events will not be permitted. Also, during the same period, restrictions in the Halifax area limiting the number of shoppers in retail stores will be extended to the entire province.

People are asked to avoid any unnecessary travel, although a recommendation against travel into and out of the Halifax area is now lifted with the condition that people go directly to their destination and stay there.

Faith gatherings, weddings and funeral services will be allowed with a maximum of 150 people outdoors or with 50 per cent of an indoor venue's capacity, for a maximum of 100 people. Receptions for weddings and funerals are not permitted. Museums and libraries will be allowed to open at full capacity as long as physical distancing and other public health measures are followed.

Since Oct. 1, Nova Scotia has conducted 94,152 tests and confirmed 347 positive COVID-19 cases. Of those, 297 cases are considered resolved, leaving 50 active cases. No one has died during the second wave. There is no one in hospital due to COVID-19.

Since the start of the pandemic, Nova Scotia has completed 217,323 tests, and reported a total of 1,436 cases of COVID-19. Of those, 1,321 cases are now considered resolved and 65 people have died as a result of the novel coronavirus.

Fifty-six per cent of cases are female and 44 per cent are male.

It is mandatory to wear a face mask in indoor public spaces in Nova Scotia.

Live map: Where Canada's COVID-19 vaccines are being distributed

PM says feds being cautious with estimates, but vaccine timeline could accelerate

Why isn't it approved for kids? Answering questions parents may have about the COVID-19 vaccine

Most Canadians plan to get COVID-19 vaccine: StatCan

Pfizer says it's not facing production issues with COVID-19 vaccine