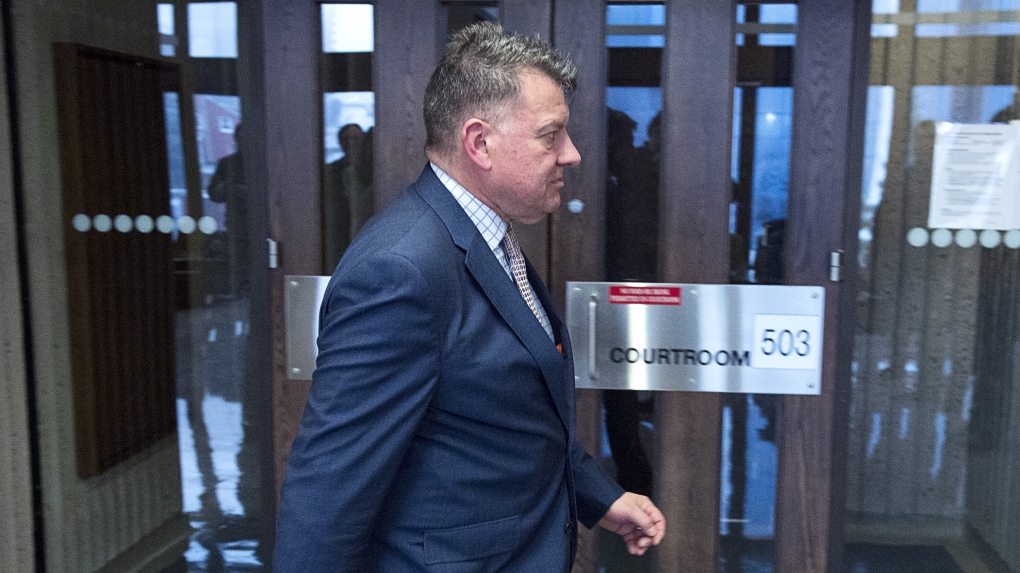 Maurice Chiasson, a lawyer with Stewart McKelvey, attends Nova Scotia Supreme Court as Canada's largest cryptocurrency exchange seeks creditor protection in the wake of the sudden death of its founder and chief executive in December and missing cryptocurrency worth roughly $190 million, in Halifax on Tuesday, Feb. 5, 2019. (THE CANADIAN PRESS/Andrew Vaughan)

HALIFAX -- Canada's largest cryptocurrency exchange was granted protection from its creditors Tuesday as it deals with the fallout from its founder's death and the virtual company's inability to gain access to $180 million in digital assets believed to be locked in his laptop.

Gerald Cotten, CEO and sole director of the trading platform QuadrigaCX, was travelling in India on Dec. 9 when he died suddenly from complications linked to Crohn's disease, court documents say.

His wife, Jennifer Robertson, has filed an affidavit with Nova Scotia Supreme Court saying Cotten was the only person with access to the laptop. She says she has searched their home in Fall River, N.S., where he conducted most of his business, and was unable to find any passwords or business records.

QuadrigaCX owes about 115,000 of its users $70 million in cash and $180 million in Bitcoins and other cryptocurrencies -- based on market prices in December.

On Tuesday, Justice Michael Wood also granted QuadrigaCX a 30-day stay of proceedings, which prevents any lawsuits from being filed against the insolvent company.

QuadrigaCX lawyer Maurice Chiasson said the orders were necessary to bring stability to a chaotic case punctuated by "threats, veiled and otherwise" of legal action.

"This is an attempt to call a time-out," he told the court, adding that the decision by QuadrigaCX's newly appointed directors to shut down the site on Jan. 28 caused a "fair amount of panic."

Meanwhile, a spokeswoman with Nova Scotia RCMP confirmed Tuesday they are assisting with an investigation into QuadrigaCX.

Cpl. Jennifer Clarke said the investigation is being led by the RCMP's Toronto West detachment.

In his submission to the court, Chiasson said dealing with the unregulated and secretive world of cryptocurrency trading has proven difficult for his team of lawyers.

At one point, he described the challenge of tracking down third-party payment companies that may have digital assets belonging to QuadrigaCX users.

"We're still struggling to find out who they are," he said.

"We still think ... there is up to $180 million in cryptocurrency floating around ... There's a lot of moving parts to this."

The company could have access to about $30 million in bank drafts, but regular financial institutions have made it clear they are nervous about handling those funds, Chiasson told the court.

On the weekend, Chiasson said his firm learned that a so-called black bank may be holding $11 million in cryptocurrency owed to QuadrigaCX's creditors.

Chiasson also suggested that reaching the 115,000 affected creditors could prove to be another challenge because those trading in cryptocurrencies typically prefer to remain anonymous and often get their information from anonymous online chat rooms.

"They don't immediately know what is real and what is not," he said.

As for Cotten's computer, he said, significant resources have been employed to gain access to the machine's encrypted files.

"There's been some limited success," he said, adding that the computer has been examined by a retired RCMP officer with expertise in encryption technology.

Lawyer Raj Sahni, who represents 78 creditors who are owed more than $100 million, marvelled at the novel nature of the case.

"This is nothing like anything we've seen before," he told the court.

Sahni pointed to misinformation on chat rooms and the fact that the court-appointed monitor, Ernst and Young, has no idea where most of the money is.

As monitor, the company will oversee the search for the missing assets and determine if the business can be sold.

Ernst and Young later agreed to post notices of the court action on Reddit.com, an online community where the QuadrigaCX debacle is the subject of much discussion and more than a few rumours.

At one point, a younger member of the Ernst and Young team was called upon to explain to the court how Reddit works.

In her affidavit, Robertson complained that some of the online chatter raised questions about "whether (Cotten) is really dead." As well, she said she has received online death threats.

George Kinsman, an Ernst and Young spokesman, said the monitor has plenty of work to do.

"There are a lot of affected parties that are involved, there's large dollar amounts ... but I think getting the order is going to be Step 1 in a meaningful process," he said outside the court.

"There will be transparency."

Kinsman said specialists will be tasked with ensuring Cotten's laptop is secure, and he confirmed that it will remain in a Toronto office.

The QuadrigaCX platform, which is based on blockchain technology, was launched by Cotten in December 2013.

Before the platform was shut down, it had 363,000 registered users.

QuadrigaCX and its affiliated companies are registered in British Columbia, but it has no offices, no bank accounts and no employees, aside from a handful of contractors.

"Most of the business of the companies was being conducted by Gerry wherever he and his computer were located," Robertson said in her affidavit.

Court documents show that QuadrigaCX had been facing liquidity issues over the past year but a major issue arose in January 2018 when CIBC froze roughly $25.7 million of its funds held in the account of a third-party payment processor.

That money has been turned over to the processor, Costodian, but they haven't deposited the bank drafts, court documents say.

Cryptocurrencies, which are not regulated or subject to industry oversight, are typically stored digitally on a computer server connected to the internet, which is known as a hot wallet.

The digital assets can also be stored on a physical device, such as a USB flash drive, which is kept offline to prevent hacking.

After Cotten died, QuadrigaCX employees tried to gain access to the company's cold wallets, but they either failed to get in or found the wallets held very little cryptocurrency.

-- With files from Keith Doucette in Halifax