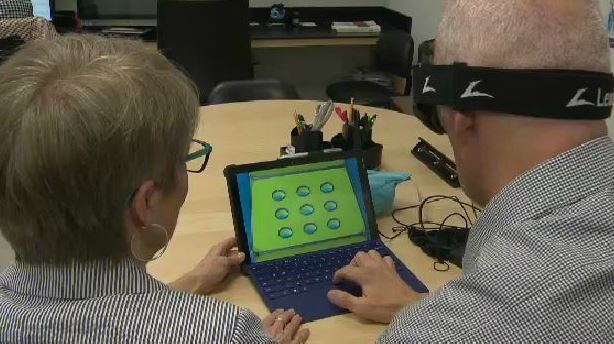 Neuropsychologist Dr. Gail Eskes is interested in the brain – specifically, how it recovers from a stroke.

This post stroke spatial neglect can vary in severity.

Ray Bourque has experience left side spatial neglect since having a stroke in July of 2014.

“To be thinking you’re wheeling your wheelchair up the centre of an aisle and your left wheel is actually rubbing the wall beside you, it’s really strange to wrap your head around that,” recalls Bourque. “To do tests, for instance, and totally ignore the left hand side of the page.”

Bourque says he tries to be conscious of the world to his left as a means of correction.

“But when you’re overtired or multitasking, it can kind of rear its ugly head and I’ve noticed that even two years out,” he says.

Bourque is trying out prism adaptation in Dr. Eskes’ lab. Special prism goggles shift the world to the right. The wearer is asked to complete a series of activities involving hand eye coordination.

“Because the world is shifted to the right by the goggles, they’re initially going to make mistakes to the right and so the brain has to think about making a leftward correction to help the person point appropriately,” says Dr. Eskes.

Once the goggles come off, Dr. Eskes says the leftward correction helps those with spatial neglect pay attention to that side.

Dr. Eskes and her colleagues are studying the most effective way to use the goggles and achieve long lasting results. She wants to make the therapy accessible to stroke patients both in hospital and after they are released.

“We’ve developed a software program, an app, that they would be able to take home with them and then when they need it, they can do the prism adaptation on a regular basis to help that training stay permanent.”