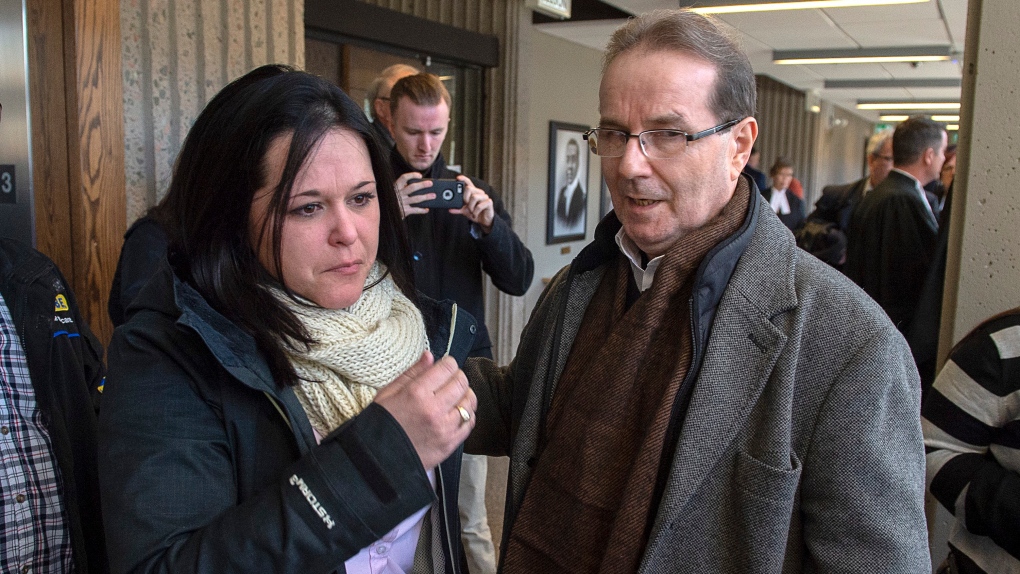 HALIFAX -- As she was fitted for a crisp new uniform in 2017, Amanda Assoun thought her lifelong dream of becoming a Halifax police officer was coming true. But five days later, a one-line note confirmed for her that there was no escaping her last name.

The Nov. 22 message from Insp. Reid McCoombs to the daughter of Glen Assoun, a man wrongfully convicted of murdering a Halifax woman in 1995, rescinded her job offer.

The reason, revealed in later correspondence obtained by The Canadian Press, was that she hadn't volunteered information to police about her agreement to post bail and provide housing in Halifax for her mentally ill father, who was living in British Columbia at the time.

"It was like something had been ripped away from me that I'd worked my entire life for," recalled the 37-year-old Halifax woman, who has since taken her wife's surname and goes by Amanda Huckle.

Her father's conviction, officially reversed by a court earlier this year, had in the past led to her being taunted by schoolmates and refused apartments by landlords. Now it was scuttling her hope of becoming a police officer.

Glen Assoun was acquitted of the second-degree murder of Brenda Way on March 1 in Nova Scotia Supreme Court after spending 17 years in federal prison and 52 months on bail. Federal Justice Department lawyer Mark Green had documented that a key witness altered her story about an alleged confession to Halifax police and the RCMP erased potential evidence about an alternative suspect.

At the time that his daughter was applying to the Halifax police, Assoun -- who was released on bail in 2014 -- was in the middle of a four-year wait for the federal attorney general to formally declare he was the victim of a miscarriage of justice.

Lawyers with Innocence Canada who represented him say the police force's decision to drop its offer to his daughter is an example of how children of the wrongfully accused also suffer injustice.

"She was extremely qualified for the job. She hadn't made any secret of her intentions. It is completely appropriate for the adult child of a man wrongly imprisoned for murder to support him as a surety when he gets a chance at freedom," lawyer Philip Campbell said.

"I was stunned when I heard about it, and heartbroken for both Amanda and her father. It was just cruel, piling one injustice on top of another."

The former chief of police, Jean-Michel Blais, declined comment through a spokesperson. In response to requests for comment from McCoombs and the current chief, Daniel Kinsella, Halifax Regional Police said through a spokesperson the department is limited in what it can say about the matter.

"I understand that as part of the various steps in the hiring process ... which took place prior to my appointment, it was determined organizationally that the employment could not go ahead," Kinsella said in an emailed statement. "As it relates to a hiring process and personal information of candidates, I cannot comment further."

In the fall of 2017, frustrated by the years of delay and isolated by bail conditions that required him to live in British Columbia, Assoun had descended into severe mental illness and been hospitalized. His worsening mental state had prompted his psychiatrist to recommend he be allowed to move home to Halifax.

Huckle says she and her wife were the only members of the family able to provide the surety to help Assoun, and when his lawyers asked for their help, they agreed. She said she believed Halifax police were fully aware of each step, as they had a liaison on the bail request and were closely involved.

Although she had limited contact with her father when she was growing up, he did attend her 2015 wedding while he was out on bail. She said she loved him, fully believed him to be innocent and wanted to provide support.

In September of that year, she'd graduated near the top of her class from the Atlantic Police Academy in Summerside, P.E.I., receiving commendations for her "Ethics in Policing" from the P.E.I. Chiefs of Police Association.

She'd been admitted into the Halifax police on-the-job training program, where she says she felt fully accepted. Already experienced as a deputy sheriff with the Nova Scotia Justice Department, she'd gone through the preliminary interviews for a full-time position with the Halifax force.

Then on Nov. 8, she was called for a follow-up interview with McCoombs, who she says told him he was there to deal with the "elephant in the room" and asked her a series of questions about her father.

She says he told her "there are police officers in this force who do not and will not agree" with her being hired and cautioned that her father must not attend her swearing-in ceremony. There were suggestions that her father had been present at her graduation from the police academy, which she explained repeatedly to the inspector was not true.

In a letter she would later write to Blais, Huckle said she told McCoombs she would "never do or say anything that would jeopardize my employment." Correspondence indicates that despite the concerns raised by McCoombs, she was offered the job that day and signed to accept the offer.

She gave her notice at the sheriff's office, and prepared to start a new job.

Instead, there was a call on Nov. 21 from McCoombs, who she said asked her if it was true that she had agreed to act as Glen Assoun's surety. She confirmed she had, and a day later the letter arrived dropping the job offer.

In correspondence seen by The Canadian Press, Huckle wrote to Blais, imploring him to reconsider and stating she hadn't attempted to hide anything. Blais replied that her description of a limited relationship with her father and a failure to volunteer her involvement in the bail process amounted to a "breach of trust that renders any employment relationship impossible."

Wayne MacKay, a former director of the Nova Scotia Human Rights Commission, reviewed the correspondence between the police and Huckle and said from what he'd seen, her treatment was "completely unfair." The professor emeritus at Dalhousie University's Schulich law school said he sees no evidence of misrepresentation on her part.

He said the issue of the surety for her father was not relevant to whether she should be hired as a police officer. "Why does (posting surety) disentitle her to a job for which she's otherwise qualified?" MacKay asked.

Huckle said she considered launching a complaint with the human rights commission, but she felt it would likely damage her chances of employment with another police force. So she decided to move on, returning to work as a sheriff and hoping for a chance at another police job. But since then, she has struggled over whether staying silent was wise.