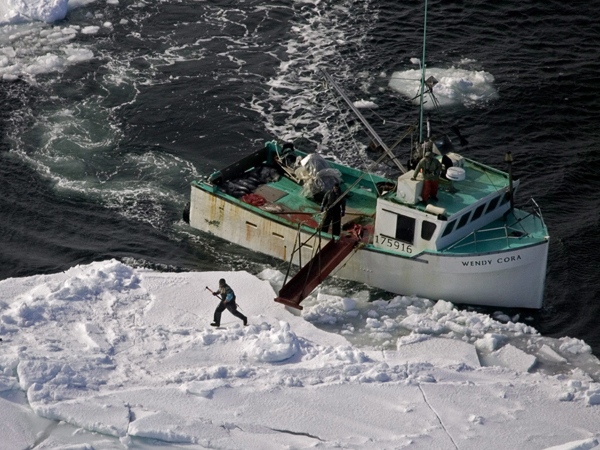 A hunter heads towards a harp seal during the annual seal hunt in the southern Gulf of St. Lawrence on Wednesday, March 25, 2009. (Andrew Vaughan / THE CANADIAN PRESS)

The General Court of the European Union issued a statement saying it rejected a challenge from a group that includes the Canadian Fur Institute, the seal processing industry and one of Canada's largest Inuit groups.

The Luxembourg-based court said the existing ban is valid because it fairly harmonizes the EU market while protecting the economic and social interests of Inuit communities.

Even though the Inuit have an exemption that allows them to sell seal products in Europe, the Inuit Tapiriit Kanatami wants the ban struck down because the group believes its markets will dry up if a wider ban remains in place.

Terry Audla, president of the national Inuit organization, issued a statement saying the ruling does little to protect the Inuit.

"We Inuit have been telling the EU all along that the ban is not good for us," Audla said. "But their colonial, holier-than-thou attitude toward us and their self-serving interests have not resulted in a fair or just process for Inuit."

The Nunavut government issued a statement saying prices for sealskins have collapsed since the EU ban was introduced, despite the Inuit exemption.

It's the second time the group has lost a challenge before the European court. The first judgment is the subject of an appeal and the industry has 60 days to launch a second appeal.

Federal Fisheries Minister Keith Ashfield declined a request for an interview Thursday, but his office issued a statement saying Ottawa will defend the "traditional, sustainable and humane northern harvest."

"The Conservative government and party are the only party standing up for hunters, as we understand the way of life in remote coastal communities where sealing is a means of survival," the statement said.

The ban has hurt Canada's 300-year-old commercial sealing industry, which landed 38,000 harp seals in 2011, less than 10 per cent of the total allowable catch.

But the hunt endures.

More than 70,000 seals were slaughtered in 2012 and another 76,000 have been killed so far this season after $5 million in industry loans from the Newfoundland and Labrador government.

The Fisheries Department says the hunt employs about 6,000 people on a part-time basis, but the economic impact is difficult to gauge.

The International Fund for Animal Welfare, which has been fighting to end the hunt since the 1970s, said government loans are propping up a dying industry.

"They're making a political point rather than trying to support an economically viable industry," said Sheryl Fink, director of the group's seal campaign.

"The seal hunt continues today because of artificial life support," she said in an interview from Montreal. "Those subsidies can't continue indefinitely."

She said the federal and provincial governments should stop pouring public money into a losing battle and instead support a one-time buyout for seal hunters.

In Luxembourg, the EU court said it rejected the complainants' argument that the main objective of the ban is the protection of animal welfare, something that falls outside EU jurisdiction.

Gil Theriault, head of the Seals and Sealing Network, said the ban sets a dangerous precedent precisely because it is based on protecting animals rather than trade.

"It's bad news for the seal industry, but it's even worse news for other industries," he said from Ottawa. "If they're starting to ban products based on so-called moral issues, then who's next? Is it lobster because we boil them? Beef? Pork?"

Theriault, who is based in Iles-de-la-Madeleine, Que., said there is demand for seal fur, meat and oil in many countries outside the EU, but the ban is making it difficult to ship products abroad. He declined to say where those markets are.

"Every time we point out a market, the animal groups make sure they go there in those countries and protest," he said.

Theriault said the fight to regain the European market continues next week in Geneva when federal lawyers are scheduled to make a presentation to a World Trade Organization panel.

But that process could lead nowhere, even if the WTO rules in Canada's favour, he said.

The panel, which is expected to release its decision later this year, can't overturn the EU ban, Theriault said.

"It's just a panel of experts giving their opinion," he said.